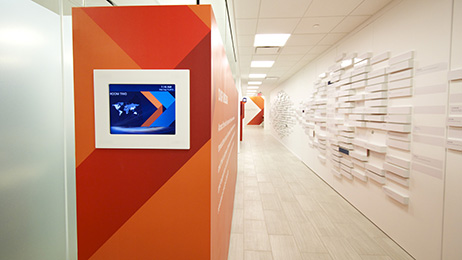 On Monday, the Atlanta-based company filed for an initial public offering, although it hasn’t specified the underwriters, price range, or stock exchange yet. It set a fundraising amount of $100 million, though that’s likely a placeholder. The company said in a statement that it will primarily use the proceeds to pay off some of its debt, which totals $21.1 billion as of March 31, according to the document.

The American Express-owned business spun out from its parent and went public in 1992, followed by a series of mergers culminating in a $28 billion buyout by private equity firm KKR in 2007. Last year, KKR invested an additional $1.2 billion in First Data. KKR will continue to largely own First Data even after the IPO.

First Data made its name in providing payments processing services and technology to merchants, but it has recently been working to keep up with the evolving payments landscape. Since 2013, it has acquired point-of-sales device startup Clover; Perka, which helps retailers with their customer loyalty programs; and gift card startup Gyft. When KKR invested last year, it did so in the hope that the company would grow into new areas like cybersecurity and data analytics.

Nevertheless, it’s been a challenging time. In the first quarter of 2015, the company reported a $112 million loss on $2.7 billion in sales. According to its regulatory filing, First Data also processed more than $1.7 trillion in U.S. payments, and 74 billion transactions globally.