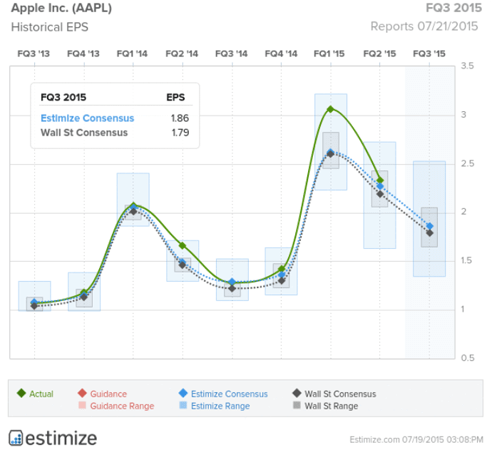 Estimize, a four-year-old experiment in financial crowdsourcing, may have reached critical mass.*

Nearly 450 mostly anonymous, mostly amateur Apple analysts contributed to the Estimize consensus represented in the above chart. Apple, it predicts, will report quarterly earnings tomorrow of $1.86 a share, up 45% year over year.

Estimize’s number neatly splits the difference between the professionals in Fortune‘s panel (average EPS $1.81) and the amateurs ($1.96). That’s quite a difference, and not at all what Apple’s guidance led the Street to expect, says Asymco’s Horace Dediu.

“For the first time in many years, I feel that there is some potential uncertainty in the results Apple will announce [on Tuesday]. After a period of excellent accuracy (shown in graph below), the company’s guidance has begun to diverge dramatically from reality and the trend might continue this quarter.”

*Estimize’s data set has grown to 8,241 contributors—2,037 professionals and 6,024 amateurs. No company gets as many estimates as Apple, which drew a record 448 last quarter. By tomorrow Estimize expects to have collected 500 Apple estimates.