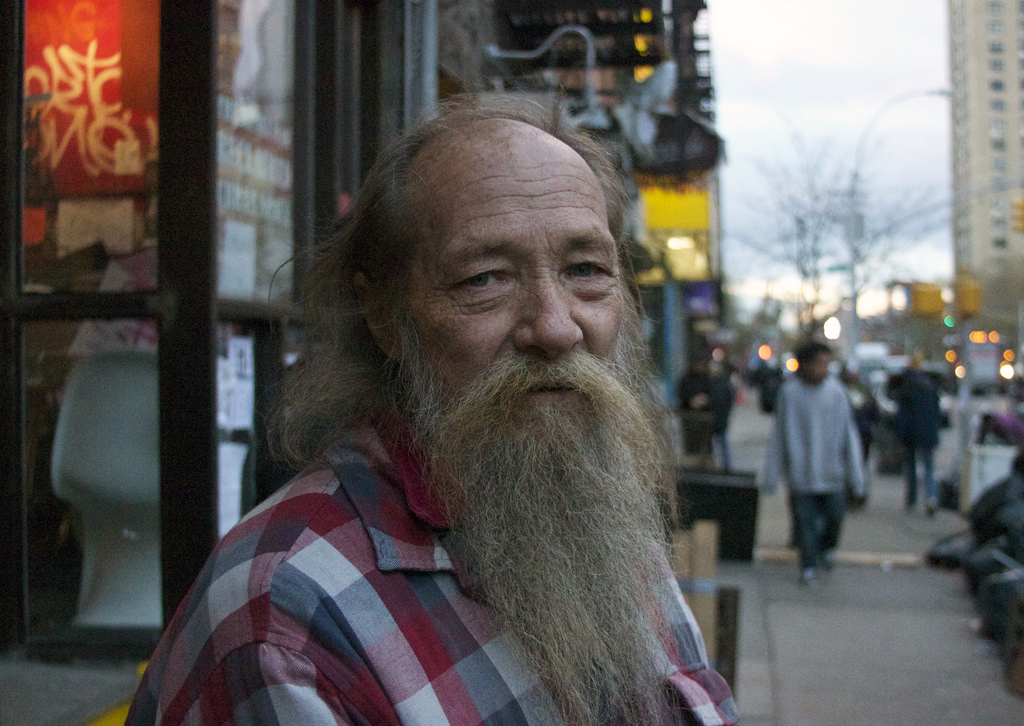 New York has always been defined by the volume and degree of interaction it forces on its people: on the subway, on the street, at the bar, at the house of worship. For The Edge Becomes the Center, I set out to understand how gentrification affects these interactions and the lives of the people who inhabit the city. Not far into my trip, I realized the word gentrification is useless—rendered so by overuse, too broad to adequately capture a huge range of disparate experiences, contexts, and ultimately, meanings. Here are a few stories I heard along the way.

In 2005, I owned my dad’s houses, I had tons of debt, I was still poeting. I was popular, I guess, in my little underground scene but I was broke as crap. I needed to make some money. I’m an egghead—I’m not a hustler from the street or anything—so I thought, my parents come from real estate, I’ve been around real estate, I’ve been a landlord, and I love people, I love Brooklyn, so maybe I can just bring those gifts and see how it develops.

The first couple years it was pretty hard. I had to be somebody’s assistant who was younger than me but definitely more knowledgeable. This dude was from the Bay Area, and he said, “I saw San Francisco turn around quickly. Light speed. So in order for you to be an effective marketer of real estate here, you can’t be focused on what this place was. You have to be focused on what it is and what it can become.”

Since I moved here, the business still keep busy but not make any money. No money, no money. Some clients still have the balance they not pay me. A couple years already and I’m still waiting. So I started looking for new space. Just need the space that fits my use. Still in Manhattan. Manhattan is a link to all the different boroughs. I can manage anybody, from my client, to my architect, to my worker. Even though in Brooklyn the rent, it’s cheaper, right, but it’s not the good location. You know my old fortune-teller, he die already, but he told me Manhattan—in the whole New York—Manhattan is the best location. Best land. For everything, for everything, for everything: Manhattan. I don’t know why. Only God know that.

You know, I don’t know how to say this feeling: when I start a job, the building, the interior it’s always bad condition or worst design, something like that, right? After I finish the job it’s a beautiful living area, it’s a new space. A new part of New York, you know? Then I have a special feeling.

I talked to the old dudes on my block and asked what was up with the lot, and asked everybody else what was up with the lot. Eventually a lot of people had a lot of shards of a story of all these broken promises and a press conference that had happened ten years before. So I called a community meeting at the local school. Passed out flyers, worked with local organizations. A lot of people came, a hundred or so. It was pretty amazing. There was still a lot of pent up anger about a half-a-million-dollar project that never happened. There were a lot of people that had a lot of feelings about that big hole in their neighborhood.

And now it’s a big beautiful community garden and park called Myrtle Village Green. We’ve been open about a year. It’s a garden and there’s a dog run. People just had a wedding. Movies get shown on a wall. There’s a bunch of communal space, communal garden beds, individual beds, the kids from the elementary school have little beds that they grow—it’s just a shared space in a neighborhood that doesn’t otherwise have that.

And I got priced out of that neighborhood just before we got access. I don’t live there anymore.

It’s all about what people can actually do, right? And giving people the ability to build their own neighborhood. This is a very nerdy and direct way to take people’s rights to the city seriously and enforce them as rights. In a truly legal sense. People have the right to create their city. Especially in these spaces that are public spaces.

I really believe that people’s ability to make decisions about the spaces that they’re in is a kind of security that lets you take the next step in your life. The anxiety of having other forces making decisions for you is untenable.

I’m into ephemeral work, big time. Take it off the pedestal. Eff the galleries, eff advertising, eff that. But it’s a little bit of a contradiction to say that. Because what you do by putting work in the street is advertising yourself. Eventually people are going to find out who you are. And although I do work outside, I happily sell my work to people that want to hang it inside. So, there are some lovely contradictions.

At the beginning, this neighborhood was nice, and it’s only better now. We have different peoples. When you have only one race, you don’t feel comfortable with these different people, but when you see people from around the world you say we are human beings, we can get along. It’s more kind. More comfortable. I think it’s nice. When I used to live in the city projects and we have all kinds of people, we all different. We have French. We have American, we have smart people, English, Russian, Polish, and we used to get along like brothers and sisters and we used to visit each other and say, “Hey, come over to my house and have a cup of coffee.” And we used to get to know each other. I like that, I feel much better.

My first winter here we had probably 165 men sleeping in our chapel and it’s a small space for 165 men. The fire department came in and I was the only staff member on duty and they looked in the chapel and the captain turns around, he closes his eyes, and he says just make sure there’s a clear egress. He could have easily said you know this isn’t good, we’ve got to count the people and then three people have to leave. But they understand.

We used to do a lot of parties, like once a week. Sometimes they put two cops on each corner just to keep an eye on us when we sit back and shut down the block and party. Nowadays we’re a lot more civilized than we were just a few years ago. We’re getting old, I’m a token hippie in a building full of aging punks.

Most of the people in this building have been here from the beginning. When I first came in the late ’80s they were punks, they were all in their late teens to mid-twenties. There was no roof, there was no stairs; they had a series of cargo nets that they used to climb up to get from floor to floor, mind you. They taught themselves carpentry, and plumbing, and electric. Nowadays when they need money, they go out and find themselves a construction job.