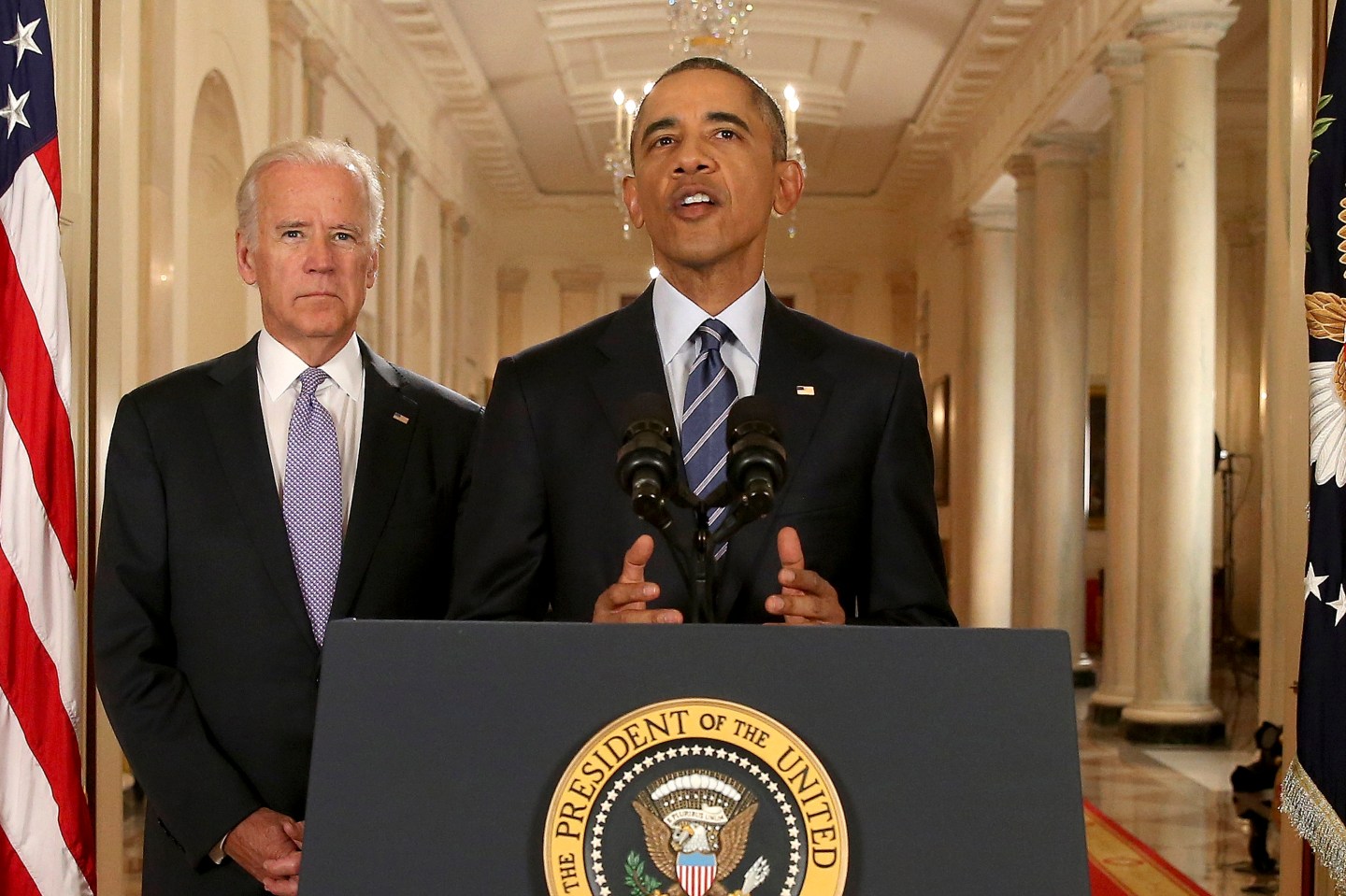 WASHINGTON, DC - JULY 14: President Barack Obama, standing with Vice President Joe Biden, conducts a press conference in the East Room of the White House in response to the Iran Nuclear Deal, on July 14, 2015 in Washington, DC. The landmark deal will limit Iran's nuclear program in exchange for relief from international sanctions. The agreement, which comes after almost two years of diplomacy, has also been praised by Iranian President Hassan Rouhani. (Photo by Andrew Harnik - Pool/Getty Images)
Pool Getty Images

A nuclear deal struck earlier this week in Vienna between Iran and a group of world powers could go a long way toward easing debilitating sanctions that have crippled Iran’s economy. Although, in the near-term, the agreement could also act as an economic stimulus for global defense companies—particularly those in the U.S.—as regional rivals bolster their defenses.

The deal struck Tuesday dictates that a U.N. conventional arms embargo on Tehran would be lifted within five years, though it could end earlier depending on how quickly Iran complies with other tenets of the agreement. Import restrictions on ballistic missile technology Iran’s armed forces so dearly love—and which make its neighbors increasingly nervous—could lift within eight years.

The details of the deal still have to pass muster in the U.S. Congress and in the capitals of the other so-called P5+1 nations that hammered out the deal with Iran: China, France, Germany, Russia, and the U.K. Many analysts see an arms race heating up in the region whether the deal succeeds or not as tensions between Iran and the states of the Gulf Cooperation Council (GCC) heighten. An appetite for newer and better weapons could boost sales for U.S. defense companies like Boeing (BA), Northrop Grumman (NOC), General Dynamics (GD), Lockheed Martin (LMT), and Raytheon (RTN).

In some cases, a military spending spree is already underway. In recent months the U.S. has cut deals for more than $6 billion in military hardware with Israel and America’s Gulf Cooperation Council (GCC) allies, who worry that more than $100 billion in unfrozen Iranian assets and an improved Iranian economy will fuel aggression in the region. “The threat perception with Iran is high,” says Alireza Nader, an Iran analyst at Rand Corp. “And it’s going to remain high in the near term.”

Iran’s regional adversaries—primarily Saudi Arabia, but also other GCC countries like Kuwait, Bahrain, and the UAE—see the nuclear accord as a means for Iran to bolster its conventional military. Iran could use its oil wealth and new assets to arm various militant groups it supports in other countries, which include Hezbollah in Lebanon, Shia groups in Syria and Iraq, and—allegedly—Houthi rebels who are the target of an ongoing Saudi aerial bombing campaign in Yemen.

Iran fears mean more major arms deals are likely in the offing as countries around the region attempt to project power and deter Iranian aggression.

“The way this will actually express itself in terms of arms sales is that there are going to be capabilities that the [United State’s] partners invest in to deal with those [proxy] threats—internal security, intelligence, border control, law enforcement, the less sexy stuff,” says Melissa Dalton, a fellow at the Center for Strategic and International Studies. “The capabilities that are going to be most effective to address the Iranian threat are in the law enforcement and intelligence side of the house. These countries are also going to come to the United States with requests for things like more fighter aircraft,” she adds. “[They’ll want] more visible, conventional, robust capabilities for projecting power and creating a conventional deterrent.”

Part of conventional arms buildup stems from a fear that at some point Iran will begin acquiring more advanced weaponry, likely from Russia or China, both of whom support repealing the U.N. arms embargo. For countries seeking out military hardware from the U.S., new military deals also has other advantages, Nader says. “It’s not just about countering Iran, it’s about building closer security ties with the U.S. as well,” he says.

One way Saudi Arabia and Gulf nations can strengthen relations with the U.S. is through the purchase of advanced American missile defense systems. U.S. policy makers have long sought to build an integrated regional missile shield to help counter any Iranian missile threats. U.S. missile defense system makers Raytheon and Lockheed Martin have already been active in the region—Raytheon has inked $5 billion worth of missile defense equipment contracts since December, a sizable chunk of that in the Middle East.

“In the wake of this deal, we’ll likely see both public and private efforts on the part of the administration and the military step up sales in key capability areas, so that if Iran does become more aggressive the Gulf countries can protect themselves,” says Melissa Dalton, a fellow at the Center for Strategic and International Studies. Out on the field, that will probably look like a mix of radars, missile interceptors, communication infrastructure and other technical elements that facilitate information sharing within and between countries, she says.

Israel—a vocal opponent of any deal with Iran—is set to receive a $1.9 billion shipment of U.S. weapons that many analysts see as a U.S. effort to assuage Israeli concerns over the Iran deal. Approved in May, the deal includes 250 AIM-120C Advanced Medium Range Air-to-Air Missiles, 50 BLU-113 “bunker-buster” bombs capable of penetrating 20 feet of reinforced concrete, and 3,000 Hellfire anti-armor missiles (Lockheed, Raytheon, and General Dynamics will all see a piece of that deal).

Pending arms deals also include a deal with Saudi Arabia for 10 Sikorsky MH-60R helicopters and associated equipment valued at $1.9 billion and another $1.75 billion transaction for up to 202 Lockheed Martin-built PAC-3 missiles. The UAE holds a contract for more than 1,000 laser-guided bombs built by Boeing and Raytheon worth $130 million. Additionally, another potential $900 million deal for a dozen of Lockheed’s High-Mobility Artillery Rocket Systems and 100 rockets is also on the table. These type of deals aren’t likely to become more commonplace in the future as increasingly edgy Gulf allies push the U.S. for more advanced weaponry as a means to assuage regional fears about Iran.

One area to watch going forward, CSIS’s Dalton says, is technologies that help Gulf nation’s cope with Iran’s proxy groups in the region rather than its conventional military or ballistic missile forces. Those technologies are less about “warheads on foreheads” and more about information, whether that’s cyber capabilities, traditional ISR (also known as intelligence, surveillance, and reconnaissance technologies), or software tools for tracking potential militant threats through data mining.

“It really comes down to being able to provide warnings: ISR, command and control, and having a common picture of what’s going on in the region,” she says. “To the degree to which there are opportunities for the defense industry, that’s an area to keep an eye on.”