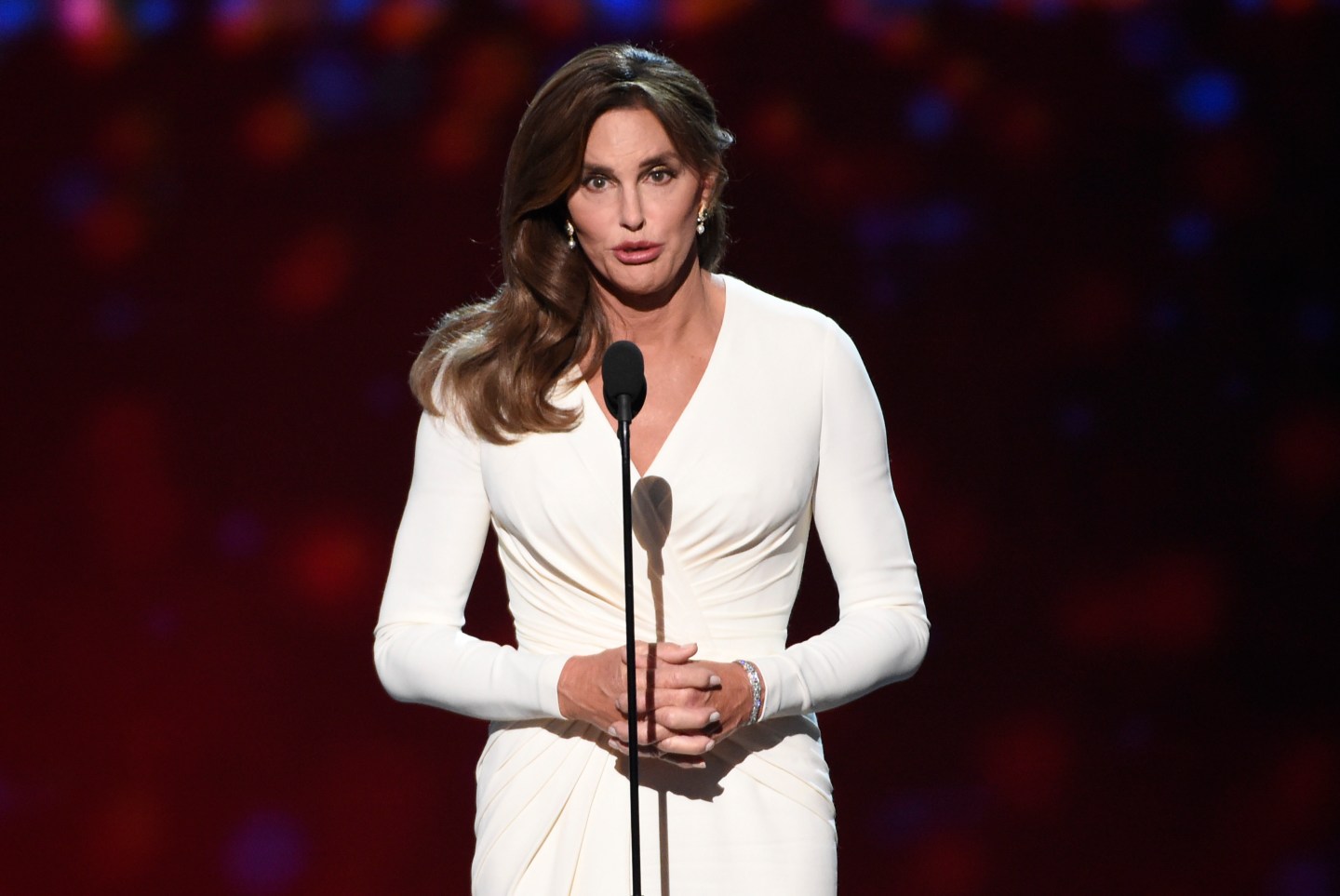 Caitlyn Jenner accepts the Arthur Ashe award for courage at the ESPY Awards at the Microsoft Theater on Wednesday, July 15, 2015, in Los Angeles. (Photo by Chris Pizzello/Invision/AP)
Photograph by Chris Pizzello — AP

This article was originally published on Entertainment Weekly.

Caitlyn Jenner accepted the Arthur Ashe Courage Award at the ESPYs on Wednesday, and used the spotlight to advocate for the trans community.

“The people out there wondering what if this all about, whether it’s about courage or controversy or publicity, … it’s not just about one person,” the Olympian said in her acceptance speech. “It’s about all of us accepting one another. We’re all different. That’s not a bad thing; that’s a good thing.”

Jenner, 65, was presented with her award by U.S. women’s soccer team star Abby Wambach, who shared statistics showing that transgender people experience bullying, assault, homelessness, and suicide at a higher rate than the general public. “Let’s talk about a way that we can make our country better,” Wambach said. “Let’s talk about an issue that not enough of us stand up for.”

Jenner, who publicly came out as a trans woman in April, used her acceptance speech to ask for respect, education, and acceptance, especially for young people just discovering they are trans. She referred to the deaths of transgender teens Mercedes Williamson, who was murdered, and Sam Taub, who committed suicide. “If you want to call me names, make jokes, doubt my intentions, go ahead, because the reality is, I can take it,” she said. “But for the thousands of kids out there coming to terms with who they really are, they shouldn’t have to take it.”

She also called on athletes to use “the power of the spotlight” to help “reshape the landscape” for trans people by setting an example of respect and acceptance. “Sometimes it gets overwhelming, but with the attention comes responsibility,” Jenner said, adding that “trans people deserve something vital — they deserve your respect. And from that respect comes a more compassionate community, a more empathetic society and a better world for all of us.”

Jenner thanked her family; journalist Diane Sawyer who conducted her coming-out interview; and her mother Esther, whom she credited with teaching her courage and determination.

Jenner’s speech also had its moments of levity. She joked about the “high-pressure” moments in her life — competing in the 1976 Olympic Games and raising a family — and quipped that planning her dress, hair, makeup and jewelry for the evening tops the list. “This whole process, it was exhausting,” she said, before begging the “fashion police”: “Please be kind to me; I’m new at this.”

The ESPYs also screened a video detailing Jenner’s early life, success as an Olympic runner, and life-long gender dysphoria. “The ironic part is that the whole world thinks they know who I am,” Jenner said in the video. “And they knew nothing about me.” The video also featured interviews with Jenner’s mother Esther Jenner and daughter Kendall Jenner, as well as transgender rights activist Janet Mock. “It takes an incredible amount of courage and strength to go against the grain of what people want you to be,” Mock said. “It’s never too late to be who you really are.”

Not necessarily limited to those in the sporting world, the Arthur Ashe Courage Award is granted to those individuals whose actions have “transcended sports,” according to ESPN. Last year, Michael Sam was honored for “his courage and honesty” as the first openly gay member of the NFL.

“The ESPYS are honored to celebrate Bruce becoming Caitlyn,” said ESPN executive producer Maura Mandt at the time of Jenner’s nomination, one day following her Vanity Fair cover reveal. “She has shown the courage to embrace a truth that had been hidden for years, and to embark on a journey that may not only give comfort to those facing similar circumstances, but can also help to educate people on the challenges that the transgender community faces.”

The 23rd annual ESPY Awards aired live from the Microsoft Theater in Los Angeles. Joel McHale hosted the telecast, previously telling EW that while Jenner’s story has been “divisive,” Jenner’s decision to transition was “very courageous. I can’t imagine it was an easy thing.”

Other stories from Entertainment Weekly:
•Caitlyn Jenner is ‘still the same person’ in new trailer for I Am Cait
•Caitlyn Jenner gives Last Week Tonight segment on transgender rights her stamp of approval
•Brody Jenner: ‘Caitlyn is just a much freer person’