Google to add “buy button” to its mobile search ads 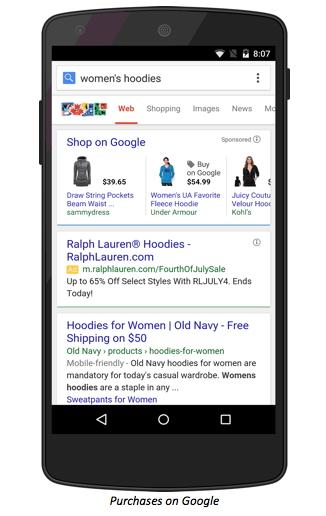 Google (GOOG) said on Wednesday that it would soon unveil a new feature called “Purchases on Google,” a “buy button” of sorts that will allow shoppers to purchase products that come up in its paid shopping ads directly from their mobile device. The move will put the search giant into more direct competition with Amazon.com (AMZN) and eBay (EBAY) in the e-commerce wars.

Google said at a press event in New York that it is testing out the feature with about a dozen retailers and expects to unveil it to consumers within a month. A consumer will see a “buy button” in certain Google mobile search results. Clicking the button would then takes the shopper to a page where she can purchase the advertised item. That page will have the merchant’s branding. If the product doesn’t exactly match what the shopper is looking for, the consumer will be able to continue looking for other products from that retailer, Google said.

Google’s retail partners will be responsible for filling orders. After an initial launch in a few weeks, Google plans to expand the feature to many more advertisers in the United States, with a goal of becoming much more widespread by the holiday season. Google’s move is the latest step by tech companies to facilitate mobile purchases: last month, Pinterest said it would add a new button that would appear next to Pinterest items that would allow users to purchase directly from the app.

The Wall Street Journal, which in May was the first to report that Google was working on this feature, described the move at the time as “a major and potentially risky strategy shift” because it means the search giant will become much more of an e-commerce company than ever before.

The opportunity is certainly ripe, though. Google executives said that shopping-related mobile searches have more than doubled in the last year, and that 28% of retail sales are influenced by mobile.