The Eurozone tells Greece: be a vassal or an outcast 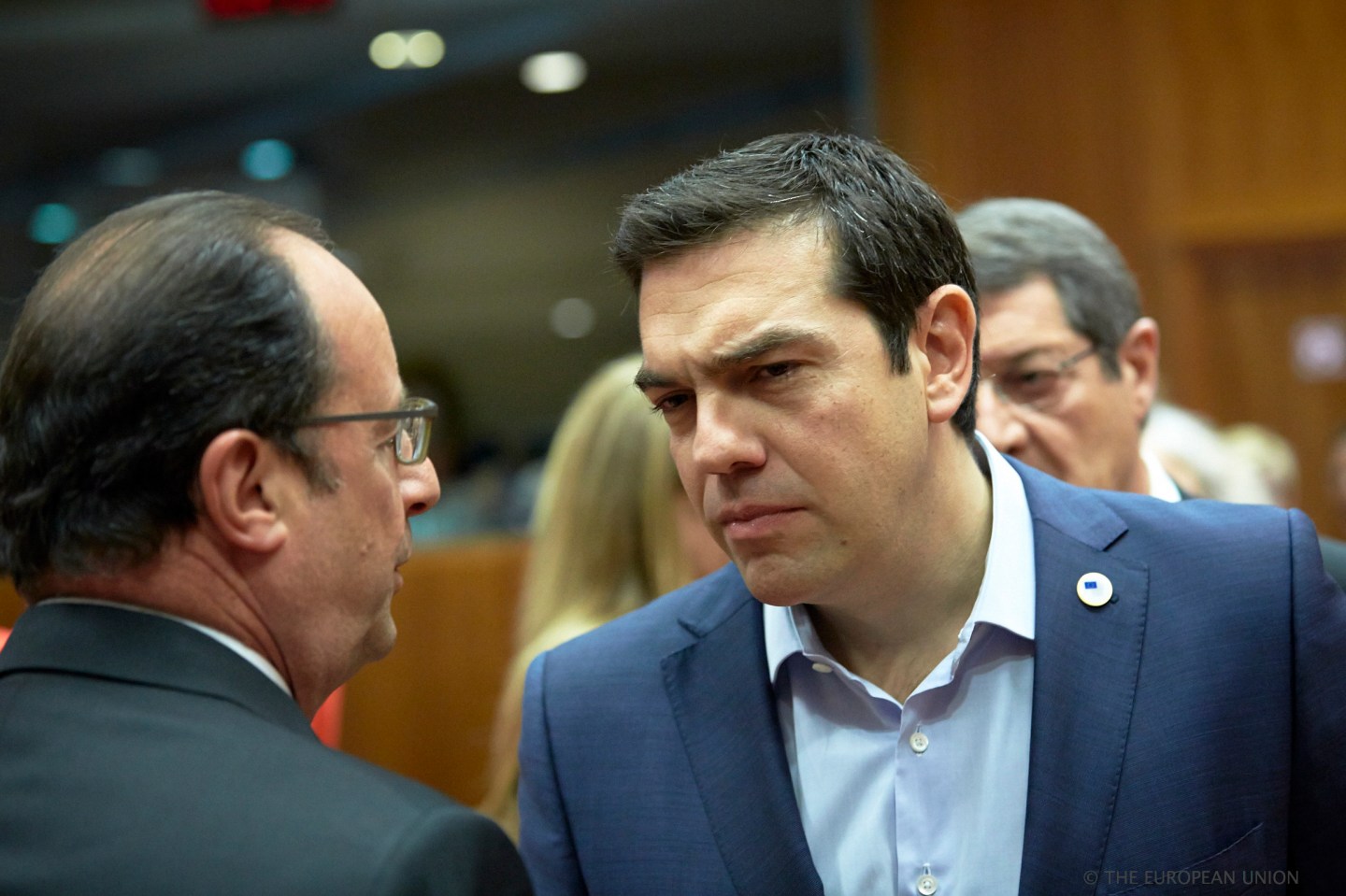 Photograph by Mario Salerno — Council of the EU

The Eurozone is shaping to give Greece 72 hours to choose between being a vassal and an outcast.

According to the terms of the latest draft statement honed by nearly two days of bitter arguments, Greece will be given a ‘temporary time-out’ from the Eurozone if it fails to pass, by Wednesday, a raft of laws whose spirit goes against an emphatic referendum last weekend, and against everything its elected government believes in. The terms are the conditions for a new three-year bailout worth an estimated €82 billion ($91 billion).

In addition to the familiar litany of reforms from VAT increases to eliminating early retirement, Greece’s creditors are reintroducing earlier demands regarding liberalization of the labor and product markets, and are now insisting on what amounts to a sweeping veto on all new legislation. They also want the reinstatement of regular enforcement (or rather, ‘monitoring and implementation’) visits by officials from the European Commission, European Central Bank and International Monetary Fund–the hated ‘Troika’. Meanwhile, another part of the draft calls for Greece put €50 billion of assets earmarked for privatization into an escrow fund in Luxembourg, under the control of the creditors. (You can read the full draft here.)

It’s a cripplingly heavy list of demands, one that reflects the exasperation felt by the creditors at months of vacillation and brinkmanship from the current Greek government, and decades of broken promises and false statistics from previous ones (it’s no accident that better guarantees for the state statistics office Elstat is among the measures required by Wednesday). It is a list that reflects the complete loss of what German Chancellor Angela Merkel, as she arrived for the summit Sunday, called “the most valuable currency: trust.” Merkel is far from being the only leader in Brussels this weekend who, after seeing the left-wing Syriza government promise one thing in Brussels only to do the opposite in Athens for the last five months, has little hope of it playing ball once the next transfer of bailout funds is in the bank.

But it’s also a list that drops any pretense of treating Greece like a sovereign state with equal rights in a legally-enshrined currency union. Vincenzo Scarpetta, an analyst with the think-tank Open Europe, in London, said via his Twitter account that the draft recalled the Romans plowing the fields of Carthage with salt after their final crushing victory in the Punic Wars. Others compared it to Austria-Hungary’s ultimatum to Serbia in 1914 after the assassination of Archduke Franz Ferdinand: a document so humiliating it could only be deliberately meant for rejection.

“It’s now clear they want to crush us. Enough,” Panos Kammenos, the head of the junior coalition partner in Athens, the Independent Greeks party, said via Twitter. Greek media have reported that Kammenos will take his party out of government rather than support any new agreement. The economist Paul Krugman wrote in the New York Times that Germany was effectively calling for regime change in Greece.

What would follow a Greek rejection of the new terms is then spelt out in the final paragraph of the draft.

“In case no agreement could be reached, Greece should be offered swift negotiations on a time-out from the euro area, with possible debt restructuring.”

That sentence, introduced at the insistence of German Finance Minister Wolfgang Schaeuble, represents a profound shift in European thinking that is difficult to exaggerate. If it makes it into the final communique (and that isn’t certain at the time of writing), it will represent the first time in nearly 60 years that a European Union document has endorsed the reversal of a progress of integration towards what it calls ‘an ever closer union’, opening the door to a process of disintegration across the continent.

French President Francois Hollande, as he arrived, was quick to debunk the notion of a ‘temporary’ exit, highlighting the major rift between the E.U.’s two largest and most powerful economies, the tandem that has driven that process of integration for decades.

“There is only Greece within the Eurozone and Greece outside of the Eurozone,” Hollande said. The latter “is a Europe which is retreating, which is no longer advancing. I don’t want that.”

According to media reports, Hollande had given Tsipras extensive help in drafting Greece’s request for a new bailout in such a way as to make it palatable to the other creditors.