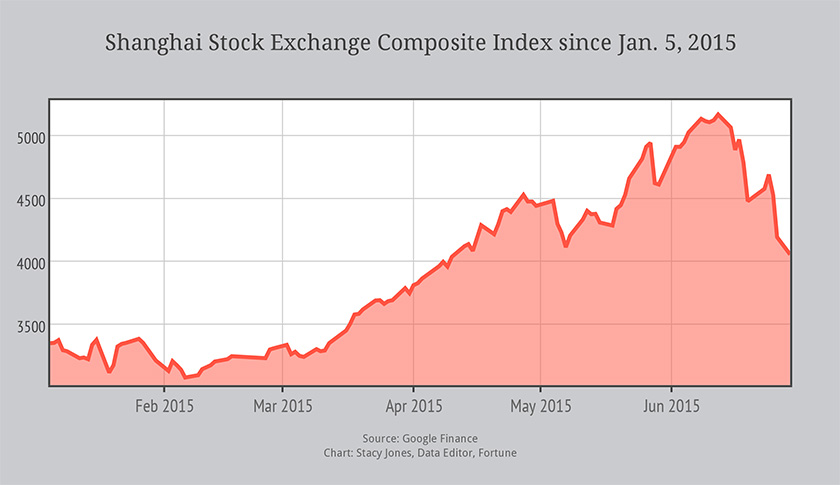 And you thought the U.S. market has been a little bumpy lately.

China’s stock market is up 25% this year. But it has been anything but a smooth ride. Shares of Chinese stocks rocketed up for most of the first half of the year, increasing by nearly 50% in the first five-and-a-half months of the year.

From that point, though, the market has mostly gone straight down. Stocks have dipped by nearly 25% over the past two weeks or so. And the plunge is picking up steam. China’s Shanghai Composite index has dropped by roughly 11% in the last two trading days. That’s the equivalent of a nearly 2,000 point plunge in the Dow.

Where do we go from here? Some have predicted the drop in Chinese stocks for a while. China’s economy has been slowing, and corporate profits have been falling. So the fact that Chinese stocks were rising as much as they were was a bit of a mystery from the beginning of the current run. China’s central bank has been pumping money into its economy, partly to boost its stock market and help its economy more broadly.

And that’s worked, a little too well. Policymakers seem nervous that Chinese stocks are too high. Investors have been buying shares on margin, stoking fears that such borrowing could be inflating a market bubble. So the wind may be coming out of the Chinese market’s sails. Then again, China’s bank cut interest rates on Monday in response to the market drop, so it’s a mixed message at best.

The average Chinese stock is now trading at 30 times earnings. That’s a hefty premium. U.S. stocks, by contrast, trade at 16 times last year’s earnings. China’s stocks should be a bit more expensive than those in the U.S. The growth prospects are better there. But with the market currently running away from risk, it hard to imagine that investors will continue to be willing to pay up.