The recent bitcoin bump is not from Greece 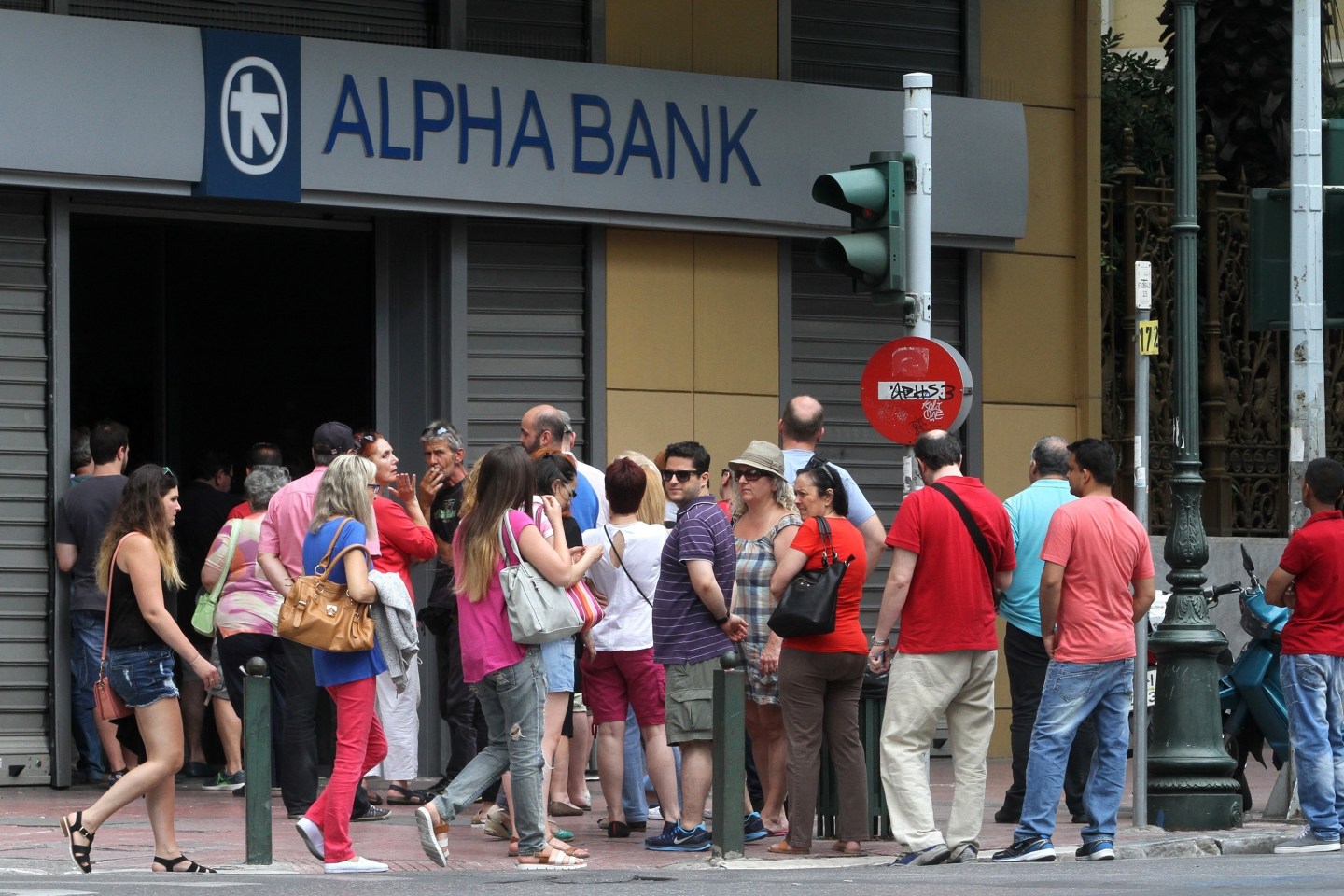 ATHENS, GREECE - JUNE 28: People wait in a queue in front of a bank's ATM to withdraw their cash in Athens, Greece on June 28, 2015. Greeks are anxious about whether the European Central Bank will increase the emergency liquidity assistance, banks can draw on from the country's central bank or not. (Photo by Ayhan Mehmet/Anadolu Agency/Getty Images)
Photograph by Ayhan Mehmet — Anadolu Agency/Getty Images

The value of the digital currency bitcoin is rising just as faith in Greece’s financial system is falling. The timing has led some to speculate that the former is due to the latter—that concerned Greek citizens are turning to bitcoin. But the evidence of a strong link is thin.

The price of bitcoin was $255.85 USD at the time of writing, which is up 3% over the past week and 9.7% over the last month, according to Coindesk’s price index.

Earlier this month, when the price rose 7% in one day, Reuters wrote that bitcoin, “surged… as concerns that Greece could tumble out of the euro drove speculators and Greek depositors into the decentralized digital currency.” The story cited a 124% spike in visits from Greek IP addresses to Vaultoro, a site that lets people exchange bitcoin for gold.

But it is unlikely that the modest bump—hardly a “surge” when compared to past spikes—is significantly connected to what’s happening in Greece. And Joshua Scigala, CEO of Vaultoro, later told Coindesk his site has seen traffic growth of more than 60% from Germany and Spain as well (which jibes with the idea that broad interest in bitcoin is growing across Europe and Central America). He also said that “any uptick in Greek users on his service was unlikely to affect price,” and that the connection some are making between bitcoin and Greece is, “mostly psychological.”

Eli Dourado, a research fellow at the Mercatus Center at George Mason University, doesn’t buy the connection. “I think it’s probably not Greece in a literal sense,” he told Fortune. “It’s not a very technologically savvy population, it’s a very strong cash culture, and I think they would have more faith in getting their euros out of the bank.” (Up until this weekend, Greek citizens were fully able to access ATMs, so the idea that they were rushing to invest in bitcoin doesn’t make much sense.) There may be a growing global interest in purchasing bitcoin that is coinciding roughly with the Greek crisis—the currency’s 2013 mega-spike coincided with a similar financial crisis in Cyprus—but the hike this summer began before the situation grew so dire in Greece. “Greeks probably should have been buying bitcoin six months ago,” says Dourado.

There are a few ways to tell whether the rising interest in bitcoin is coming from Greece. One is to look at the volume of bitcoin transactions in different currencies. Are more bitcoins suddenly being bought in euros? The web site Bitcoin Charts says no: over the last 30 days, purchases in euros make up 6% of bitcoin transaction volume, consistent with what it has been for months. (Similarly, 6% of the $2.1 million in bitcoin held by the storage platform Bitreserve is in euros.) A more anecdotal method would be to check Google Trends. Have more people been searching about bitcoin in Greece than before? Google says no: Greece has a search volume index of 36 for “bitcoin,” which does not land it in even the top 15 regions, and no searches from or relating to Greece are rising or trending. Then there’s the question of volatility: is the price surging unevenly enough to create sudden volatility? According to a tracker Dourado created, no: bitcoin’s volatility has in fact gone down steadily since January.

“I think we are seeing a boomlet in global demand as a hedge against any kind of uncertainty, not just [the uncertainty] in Greece,” said Dourado. “I think the value of the concept is being affirmed. I would also note that it doesn’t take a huge increase in interest to move the bitcoin price, so I would be careful about overselling the increase in price over the last couple weeks—it’s still a pretty modest increase.”

Peter Kirby, CEO of Factom, which he calls a data layer for the block chain, also sees no significant link between Greece fears and the bitcoin price. But he does believe the bitcoin blockchain has major potential for Greece’s financial system. “Bitcoin would be great for Greece,” he told Fortune. “It’s money the government can’t touch. If I were a Greek citizen right now, I’d be scared out of my mind. The fact that you can put your money in bitcoin and wait out what happens is very useful. Given the choice of a Greek bank, or bitcoin, I’d take bitcoin all day long.”

As for the price bump? “It was trending up with or without Greece,” said Kirby, “and I think the majority of Greek citizens are still like, ‘What’s a bitcoin?'”

If Kirby’s right about a lack of widespread awareness of bitcoin in Greece, well, some high-profile bitcoin supporters are already looking to change that. Erik Voorhees, CEO of ShapeShift, today launched a campaign, using the social payments platform ChangeTip, that encourages people to find Greeks who have a lot of Twitter followers and tweet at them: “Banks frozen in Greece? Try Bitcoin instead…”

Many in the bitcoin community don’t place a great importance on the digital currency’s price anyway. Skeptics have continued to point to the 2013 peak of more than $1,200 USD as a sign that bitcoin is too volatile, and despite the rise of the last few weeks, the price is still down nearly 60% from a year ago. But venture capital continues to pour into the space, and supporters say that the current price range, in the $200s, is a fine place for it to settle—as long as it doesn’t get too low.

“The price needs to stay high enough for there to be interest in mining it so that the blockchain stays secure,” says Dourado. “So the price is not unimportant. But what is unimportant is people saying negative things about it based on price.”