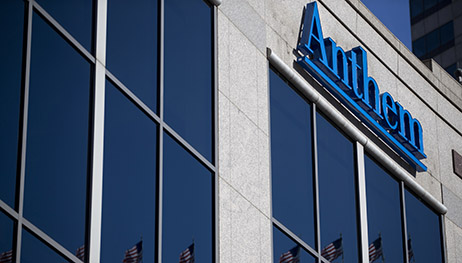 The biggest U.S. health insurers are seeking acquisitions to boost membership in government-paid healthcare plans and the employer-based insurance that is Cigna’s specialty. Being bigger can help them negotiate better prices and improved networks of doctors, they said.

Anthem’s offer comes as Cigna (CI), as well as insurer Aetna (AET) Inc., are participating in an auction to acquire another rival, Humana (HUM) Inc., according to a person familiar with the matter, who asked not to be identified because the sale process is confidential. Humana was first reported to be considering a sale in May.

Anthem, the second largest U.S. health insurer, said in a statement it had made four offers for Cigna in June, but that the deal was stalled over Cigna Chief Executive David Cordani’s role in the merged company. The Wall Street Journal first reported on the rejected offers last week.

In a letter published as part of the company’s statement on Saturday, Anthem detailed its weeks-long attempts to reach a deal with Cigna, including the steps by which it raised its offer to $184 per share. Based on that price and 257,370,000 shares outstanding, the deal is worth about $47 billion.

CEO Joseph Swedish wrote that the company did not think investors supported Cigna’s rejection of the deal because of Anthem’s refusal to guarantee that the CEO role would eventually go to Cordani. The letter also said Cigna had refused to sign a two-week standstill agreement with Anthem that would prevent both sides from having other deal talks.

A combined Cigna and Anthem would have 53 million customers in commercial, government, consumer and other kinds of health insurance plans. Anthem, which offers Blue Cross Blue Shield plans in 14 states, said the purchase would boost earnings more than 10 percent in the first year and double that in the second year.

The news broke in May that Humana, which specializes in Medicare Advantage plans for older people and the disabled, was considering selling itself, a source familiar with the matter said.

The Wall Street Journal last month reported that Aetna and Cigna were possible buyers. Both companies declined to comment on the report at the time.

Last week, the Journal reported that Cigna had turned down Anthem after two offers and also said UnitedHealth Group Inc was interested in buying Aetna.

Aetna itself has for years been speculated to be a buyer for Cigna, but Wall Street analysts have said one barrier would be finding a role for the CEO of each company.

Leerink Partners analyst Ana Gupte said she thought the Anthem-Cigna deal would close and that Aetna had an 80 percent or more chance of buying Humana. She also wrote in a research note that she expects UnitedHealth to try to buy Aetna, but that it could face too many regulatory barriers.

Regulatory issues would likely not be an issue with Anthem as the buyer and Cigna as a target, Wall Street analysts have said, while Anthem and Humana is another combination that could pass regulatory scrutiny.

Swedish wrote in a letter to Cigna’s board that Anthem had proposed that Cordani could be president and chief operating officer of the new company during a two-year period while Swedish remained CEO. After that time, Swedish said he would step down and that the board could appoint a new CEO. (Additional reporting by Greg Roumeliotis; editing by David Gregorio and Richard Chang)