Music festivals: From peace and free love to startup pitches and corporate consolidation 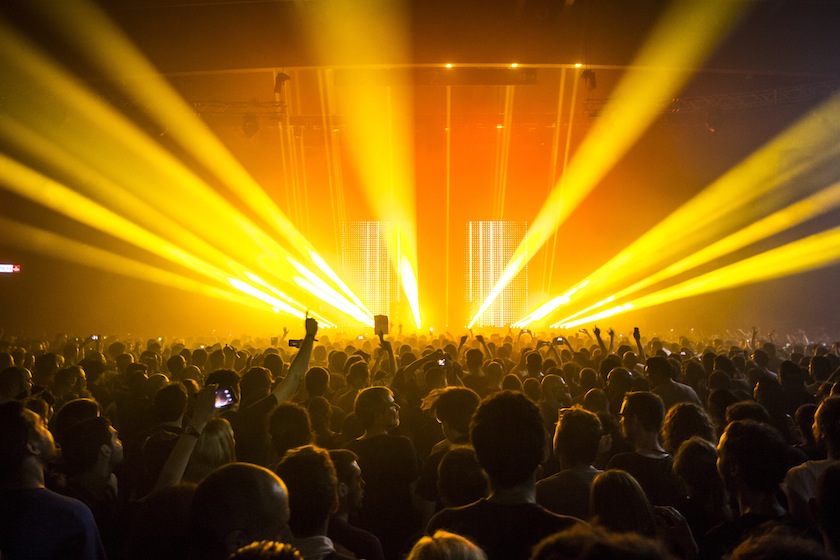 The first presenter in the Start-Up Competition (sponsored by Ricoh) on the Stage+D (sponsored by Mazda Rebels) is Gianfranco Ceccolini. He’s the Brazilian co-founder of MOD, a Berlin startup that produces a music pedal into which users can download various effects.

Ceccolini is not presenting at a typical startup event in Silicon Valley, however, but rather at Sónar, a 22-year-old Barcelona electronic music festival. And his pitch, as well as the prominent non-music sponsors and presentations by industry names like Kickstarter CEO Yancey Strickler and Monument Valley creators ustwo, underscore just how much music festivals have evolved in an increasingly crowded market.

“That is our challenge now: how do we differentiate ourselves amid such an immense supply?” says Ricard Robles, Sónar’s co-founder.

“Exploded” is too mild a word to describe what has happened in the music festival industry since the era of Monterey Pop and Woodstock. When it put together its annual listing for 2015, industry trade publication Pollstar turned up over 1,500 festivals in 70 countries, says president and editor-in-chief Gary Bongiovanni.

During the summer, the supply can be overwhelming. On the second weekend in July, for example, Bongiovanni notes that there will be major events in Slovakia, Norway, Serbia, the Czech Republic, Spain, Portugal, England, Switzerland, and Hungary.

“I think there’s definitely a festival overload in the live music sector,” says Allen Bargfrede, the executive director of Rethink Music, a research group at the Berklee Institute for Creative Entrepreneurship.

Summer music festivals have been a staple in Europe for decades, but the U.S. market really awoke with the launch of the Coachella festival in 1999. Since then, festivals have boomed.

The timing couldn’t have been better for the music industry. As recording sales revenues declined in recent years, musicians have turned to live shows as a major source of income: Festivals offer a good payday without the necessity of scheduling a tour and filling concert spaces on your own. OutKast, for example, announced a 40-festival tour in 2014 to mark their 20th anniversary comeback.

“For the last few years, they’ve been very lucrative for artists,” says Bargfrede. “They pay well, it’s a flat fee, and you have a built-in audience. It’s an easy gig.”

If festivals survive the first few years (they typically lose money for one to three years), they can offer big revenues for their promoters. Last year, for example, Coachella pulled in $78.3 million in revenues, up from $67.2 million in 2013.

“Tickets are only a small part of the pie. The food and beverage, parking, and all the rest is where they really make their money and why promoters like to do festivals. Think of Bonnaroo [an annual music festival in rural Manchester, Tenn.]: Once you have the crowd there, you own them for the duration of the event,” says Bongiovanni. “It’s risky but the payoff can be enormous”

At this point, the festival market may have reached a saturation point. Live Nation cancelled a second weekend at Washington State’s Sasquatch Music Festival and put the River’s Edge Music Festival in St. Paul, Minn. on hiatus. Asheville, N.C.’s Mountain Oasis went on hold in 2014. And in 2012 alone at least a dozen UK festivals closed or took a break.

You can attribute the scaling down to oversupply, a spike in musician pay caused by competition for the same bands, or to the lack of differentiation on festival lineups (OutKast, Radiohead, and the Chemical Brothers appear on a lot of playbills).

“Everybody is chasing the same acts. They’re in demand all over the world,” says Bongiovanni. “That’s probably the greatest threat to the festival business: that we’re maxing out on events we can produce with the available talent.”

Starting in 2002, Sónar began to spread its brand by franchising around the globe, especially in areas with few festivals, like Latin America (festivals like Creamfields and Lollapalooza also do this). Since then, it has produced 50 events outside Barcelona, and this year there will be Sónar events in Reykjavik, Stockholm, Copenhagen, São Paulo, Buenos Aires, Santiago (Chile), and Bogotá.

The festival’s founders introduced the Sónar+D conference in 2013. The idea, says the executive director of Sónar’s production company, Ventura Barba, was to capitalize on Sónar’s DNA as a mix of music, technology, and creativity by launching an event where music and other creative industry professionals—a large number of the festival-goers—could mingle and exchange product concepts and business ideas.

And so today, as bass-lines throb under Barcelona’s wide blue sky, SXSW film curator Jim Kolmar talks about film trends and festival organization while, nearby, Melbourne’s RMINT University shows off the Resonance table, a brightly lit interactive table that users play by moving geometric objects and their fingers across its surface.

Wandering among the technology exhibits are David Bohn González and Grace Field, who flew from their home in Asunción, Paraguay to visit Sónar on their way to see Bohn González’s family in the Canary Islands. “For me, this is the future of sound. It shows what music will be in 10 years,” says Bohn González, 26, a sound engineer. “You can see the Chemical Brothers and these other artists in many other situations, but at the same time to see this is huge.”

The couple represents the two sides of the audience that Sónar’s founders hope to attract. “He came more for the technology stuff,” says Field, 30. “I came for the night parties.”

If they succeed, Sónar could easily become an attractive target for the large firms consolidating the industry. For now, though, that’s not part of the plan. “Sónar is an event managed by an independent company and there are no plans in the short term for that to change,” says Robles.

Sónar in Barcelona runs through June 20.