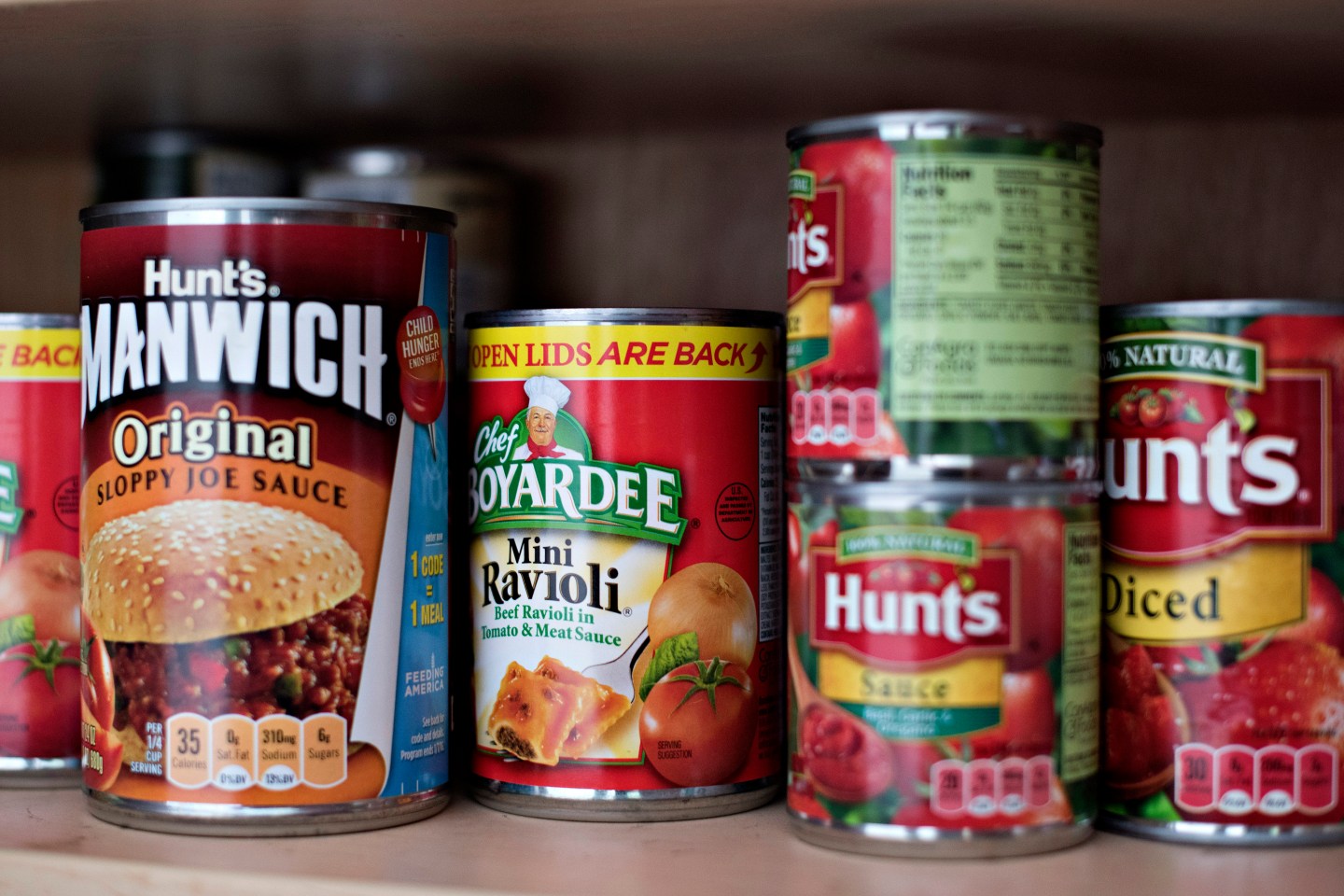 Jana Partners thinks ConAgra, the packaged food giant, has gotten too off brand.

Three years ago, ConAgra (CAG), the maker of such well-known packaged foods as Slim Jim jerky, Hunt’s tomato sauce, and Chef Boyardee, bought Ralcorp, which makes private label packaged goods for supermarkets and other retailers. The acquisition hasn’t gone well. ConAgra and other big food companies have struggled with growing consumer demand for organic and less processed food. That’s put the company in the sights of activist investor Jana.

On Wednesday evening, the hedge fund disclosed that it had bought 7.2% of ConAgra’s shares, a roughly $1.2 billion stake in the company. Jana also says it has recruited three individuals, including the former head of Nestle USA, to assist the food giant. The hedge fund has not said whether it will nominate those three people to ConAgra’s board, but it asked the company to push back its deadline for nominations, which was supposed to be this weekend.

ConAgra has agreed to push the deadline to July 8, but has said little else about the hedge fund investment. “We welcome shareholder engagement,” ConAgra said in the statement, but the company said it would wait until after its June 30 earnings release before opening discussions with Jana.

Activists typically push for companies to either break up, sell themselves off to someone else, or issue debt or use cash to buyback shares. It’s the type of stuff that is derisively referred to as financial engineering. And Jana has pushed from the start for sales in the past, as was the case with PetSmart, which it took a position in last year. Five months later, the pet retailer was sold to a private equity firm.

But sources familiar with Jana’s thinking on ConAgra say the hedge fund has not made up its mind on whether the company should be split up or sold off. That’s why the hedge fund has recruited food industry veterans to help it operate better. One of the hedge fund’s biggest beefs with the company appears to be the fact that, despite the Ralcorp acquisition, ConAgra doesn’t seem to have a senior executive with experience in the private label business. Last year, ConAgra recruited the former head of Hillshire Brands Sean Connolly to be its new CEO. But Hillshire Brands, like ConAgra, has little experience in private label food.

ConAgra has said it prefers to pay down debt before increasing share buybacks. And the stock, which jumped after the Jana announcement, now trades at 19.5 times earnings. That’s a lower price-earnings multiple than many of its competitors. ConAgra’s earnings aren’t sliding, but they aren’t expected to rise in the next year. Still, even snack company Mondelez (MDLZ), which has had trouble boosting sales and earnings, trades at 23 times this year’s earnings.

But a split up may not help matters much. ConAgra currently has a market cap of nearly $17 billion. When it bought Ralcorp three years about, the food giant paid 11 times operating profits for the private label food manufacturer. ConAgra’s private label business now generates $168 million in profits. If it were to get the same multiple as it did when it was bought by ConAgra, a stretch given the disappointing results of the acquisition, that would give it a value of a little under $2 billion.

That means ConAgra’s two other units, which includes its branded goods as well as its commercial foods business, would have to be worth significantly more than $15 billion to justify a spin-off. Combined, they generate roughly $1.6 billion in operating profits, which gives it an operating earnings multiple of 9.4.

That is a discount to some competitors. General Mills, for instance, trades at an operating earnings multiple of 11. But that company has an operating margin of 17%. That’s far higher than the 14% ConAgra gets in its non-private label business. (Private label margins are a paltry 4%.)

That means even if Jana wants to split up ConAgra, it will have to improve its recipe first.