The ticking economic time bomb that presidential candidates are ignoring 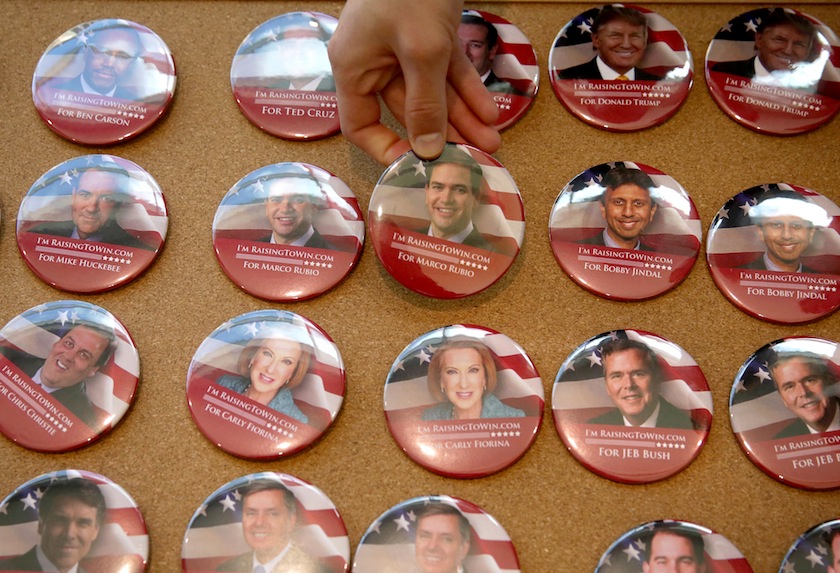 OKLAHOMA CITY, OK - MAY 21: A button features Republican presidential hopeful and U.S. Sen. Marco Rubio (R-FL) is being picked up during the 2015 Southern Republican Leadership Conference May 21, 2015 in Oklahoma City, Oklahoma. About a dozen possible presidential candidates will join the conference and lobby for supports from Republican voters. (Photo by Alex Wong/Getty Images)
Photograph by Alex Wong—Getty Images

On June 16, the Congressional Budget Office published its annual Long-Term Budget Outlook. The report’s sobering conclusion––that ballooning deficits could sink the whole economy––appears to have escaped the notice of presidential candidates from both parties. None of the contenders, except maverick billionaire Donald Trump, is talking about how they’ll save America from runaway debt.

Instead, the candidates are crossing swords over income inequality, immigration policy, America’s role in foreign conflicts, and global warming. Tackling any of those issues will be a lot tougher if America’s prosperity is waning. And wane it will if we fail to avert the looming budget debacle.

As the CBO report makes clear, America’s future leaders are ignoring the paramount economic challenge of our time.

Of course, the CBO’s urgent warnings are nothing new. What’s changed is that, in the last few years, the huge, post-financial-crisis trillion-dollar-plus deficits have shrunk. Judging from the candidates’ silence, you’d think the problem was fading. Not so. A number of temporary factors account for the improvement. Interest rates are extremely low, reducing payments on our gigantic debt and effectively making its gigantic size. The “sequester” legislation has curbed discretionary spending. The wave of baby boomers qualifying for Medicare and Social Security has reached something resembling a plateau; it’s rising, but not yet at disastrous levels.

The tranquil period won’t last. Starting in 2018, the ranks of retirees collecting Social Security and joining Medicare will start to accelerate, and costs will follow. It’s not that America used this period of calm to reduce debt. Our borrowing still stands at a post-war record of 74% of GDP, twice the level of 2008. We’re starting with a mountain of debt, and building it higher.

According to the CBO, deficits will start to explode in 2018. Over the next eight years, it will get worse and worse. By 2025, the budget will be a wreck without radical reform.

Hence, the crisis period will commence in the second year of the next president’s term. If he or she is re-elected, it will haunt their second term, or leave a legacy of destruction for their successor.

Put simply, the budget issue the major candidates are ducking could very well prove to be the biggest challenge of the next administration.

The CBO runs two MAIN sets of numbers. The first is the CBO’s “extended baseline.” It assumes that all of today’s laws will remain in place. The second projections are called The Alternative Fiscal Scenario, or AFS. The AFS outlook is a lot more realistic than the “everything remains the same” forecast. It assumes that expiring tax breaks are extended, that the draconian “sequester” cuts are restored either by gimmicks or outright legislation, and that discretionary spending returns to its historic levels, instead of shrinking as mandated under current law. Unless Congress succeeds in passing landmark reforms against heavy odds, those projections are likely to materialize.

So we’ll follow the AFS numbers. The trajectory of one crucial budget item encapsulates the crisis: interest expense. Today, it’s not a major problem because interest rates are so low––even though our debt levels are nearing the danger zone. This year, interest costs will amount to only 1.3% of GDP, equivalent to 6.3% of total spending.

But starting in 2018, mounting deficits will push our towering debt to greater and greater heights. The deficit will stand at 5% of GDP, or $1.35 trillion, according to the Alternative Fiscal Scenario. And debt will rise from 74% to 87% of America’s output.

The main driver of these concerning forecasts, of course, is a surge in spending, led by debt service. Under the AFS model, federal outlays over the next decade will balloon from 20.5% of national income, near the historic average, to 23%. Interest expense will jump from $234 billion this year to around $920 billion by 2025. That’s 15% of all federal spending, more than twice the portion in 2015. So in 10 years, the burden of carrying our debt will exceed what we’re paying today to all Social Security recipients.

The CBO contends that heavy spending and huge deficits will slow economic growth by starving the savings and investment that nurture productivity. But even under the AFS forecast, interest rates will remain low by historical standards. Although the CBO doesn’t give a precise number for 2025, Fortune reckons that the agency is projecting a “real” rate of around 2.7% on 10-year treasuries.

That number lies in the mid-range by historical standards, and could well prove optimistic. So let’s say the inflation-adjusted yield goes a point higher, to 3.8%. (That would put the 10-year, including a 2% inflation premium, at 5.7%.) In that case, extra interest payments would lift spending by $235 billion, to a total of $1.15 trillion. America would be channeling almost one dollar in five on interest payments instead of healthcare benefits, highways, or bridges. That $1 trillion-plus is more than we’ll spend this year on Medicare, Medicaid, and all other federal healthcare programs combined.

According to the polls, America’s voters are hungry, courageous truth-tellers. The truth about America’s budget couldn’t be plainer, or more alarming. The candidates must think that voters don’t see what’s coming, and anyway, it’s a few years until crunch time. The winner may prevail without addressing the inevitable. But he or she will be judged on how they prepare for and tackle this crisis once in office.

The badge of real courage, the kind of courage we want in a president, would be selling Americans on a solution, backed by detailed, convincing numbers, starting right now.