BuzzFeed’s new app is everything the site isn’t: Short, news-focused and serious 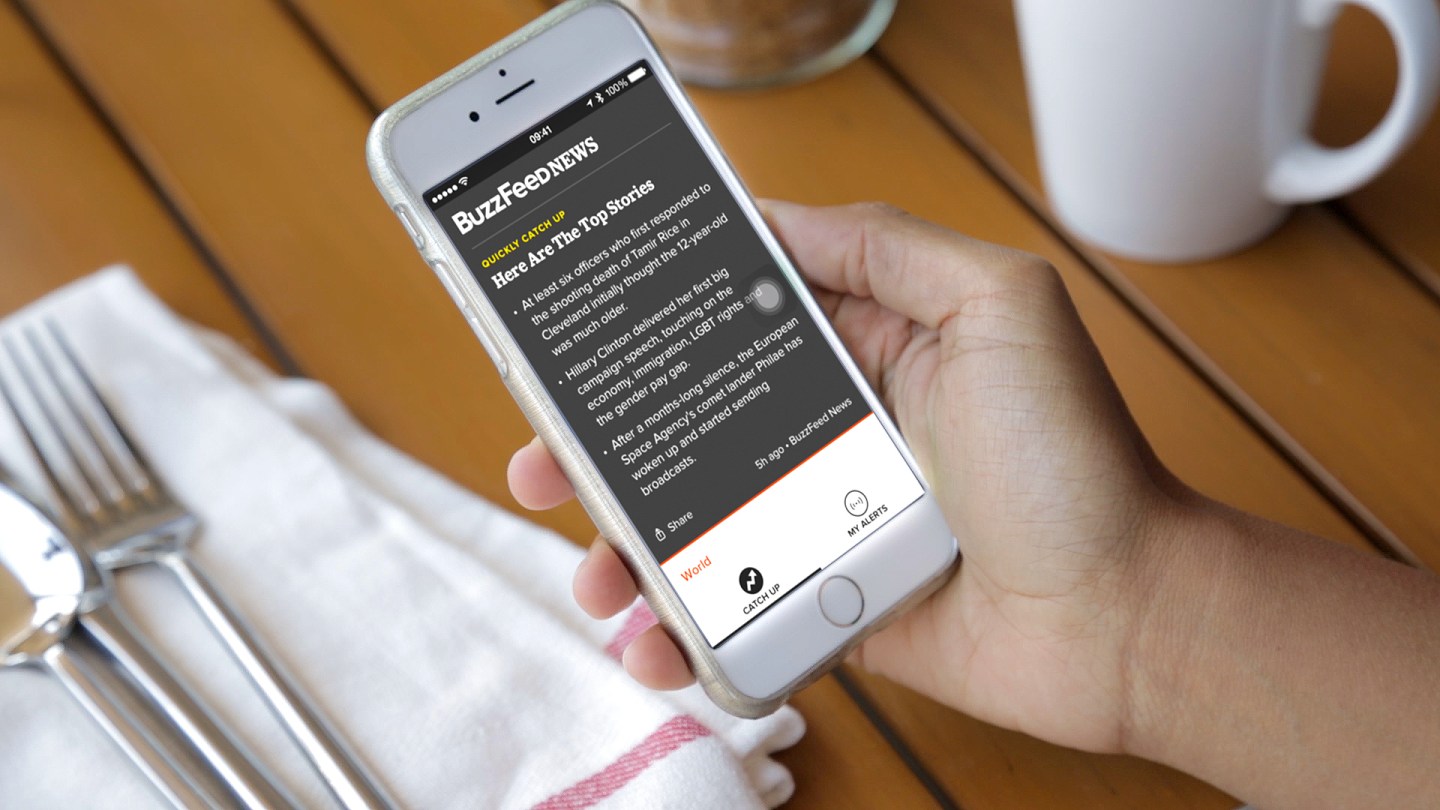 For better or worse, BuzzFeed seems to have become a kind of shorthand for the idea of shallow, click-driven news geared toward millennials, or the endless noise of a thousand viral-news updates. At least some of that reputation is over-stated. But it’s still interesting that the company’s new mobile app, introduced this morning, isn’t really any of those things. It doesn’t have any LOL or “cute!” logos or stickers to click, and the stories are mostly serious news, treated seriously.

It helps that BuzzFeed has another app that traffics in all of the standard entertaining, clickable fare the site has become known for. The purpose of the news app, editor-in-chief Ben Smith told me in an interview before the launch, is to treat the site’s serious news with the respect it deserves and to highlight reporting by BuzzFeed’s growing investigative team.

That’s not to say the app doesn’t feature any quirky or entertaining stories. While I was trying out a demo over the past couple of days, I saw a post about a new taco emoji (republished from Quartz) as well as one about video games (from Boing Boing), and there are animated GIFs here and there. But most of the stories I got as I scrolled through the app were about topics like Britain’s immigrant detention centers, a recent prison break, and an investigative feature on the prison sentences for mothers in child-abuse cases.

Is the app an effort to counter BuzzFeed’s reputation as a purveyor of the ephemeral? A recent report from the Pew Center indicated that the site might have a trust problem with some audiences, in part because of the content it is associated with (although founder Jonah Peretti noted that the Pew data is almost a year old, and that BuzzFeed has since changed its approach).

In an interview from London, Smith said that the stories selected for the app “may not always be serious, but we are very serious about it.” He added that “we definitely want people to know we’re doing serious news, and this is one of the ways that we are trying to do that.”

Peretti told USA Today recently that “news is the heart and soul of any great media company” and that “it might not be as big a business as entertainment, but news is the best way to have a big impact on the world.” And it’s clear that BuzzFeed wants to have an impact.

In contrast to the image of the site as an endless stream of viral posts, each of which deserves only a minute or two of attention, Smith said the app is designed to provide the opposite: A brief list of the important stories readers should be aware of—regardless of whether they are from BuzzFeed or some other outlet. In other words, something similar to what the New York Times is trying to do with its NYT Now app.

But isn’t that what newspapers used to do? And so isn’t BuzzFeed trying to put the new-media genie back in the bottle to some extent, or rewind the clock? Smith said the app is a recognition that many people simply lack the time to spend the entire day scrolling through Twitter or dozens of websites for breaking news. They need a smart bundle that can give them what they need to know, he said—something that other apps and aggregators such as Circa and Nuzzel are also trying to provide.

“It’s an interesting challenge, to get information to people who aren’t always swimming in it the way journalists like me are,” Smith said. “The fundamental unit of the news story has been blown apart, and that’s very exciting, but a lot of people have been left behind by that. There are news junkies like me, but there are also lots of people for whom a totally insane Twitter feed is not an ideal way to filter the world. We didn’t set out to build a bundle, but this is kind of that.”

As for trying to convince people that BuzzFeed can do serious news, Smith said that one of the best ways to do that is to simply continue reporting serious news stories. “A lot of our competitors have been doing this for 150 years—we’ve been doing it for three,” he said. “Ultimately the way you show people that you do news is to break important stories.”

Smith recently hired former Guardian U.S. editor Janine Gibson to run BuzzFeed’s British operation, and said the company did so because it wants to try to “break in at the top tier and compete on a really high level with the best of British media.”

At least some of BuzzFeed’s ambitious goals are also being driven by the need to please some of its high-profile financial backers. In its latest funding round, the company—which gets about 190 million unique visitors a month, according to Quantcast—raised $50 million from venture capital firms including Andreessen Horowitz and reached a valuation of close to $1 billion.