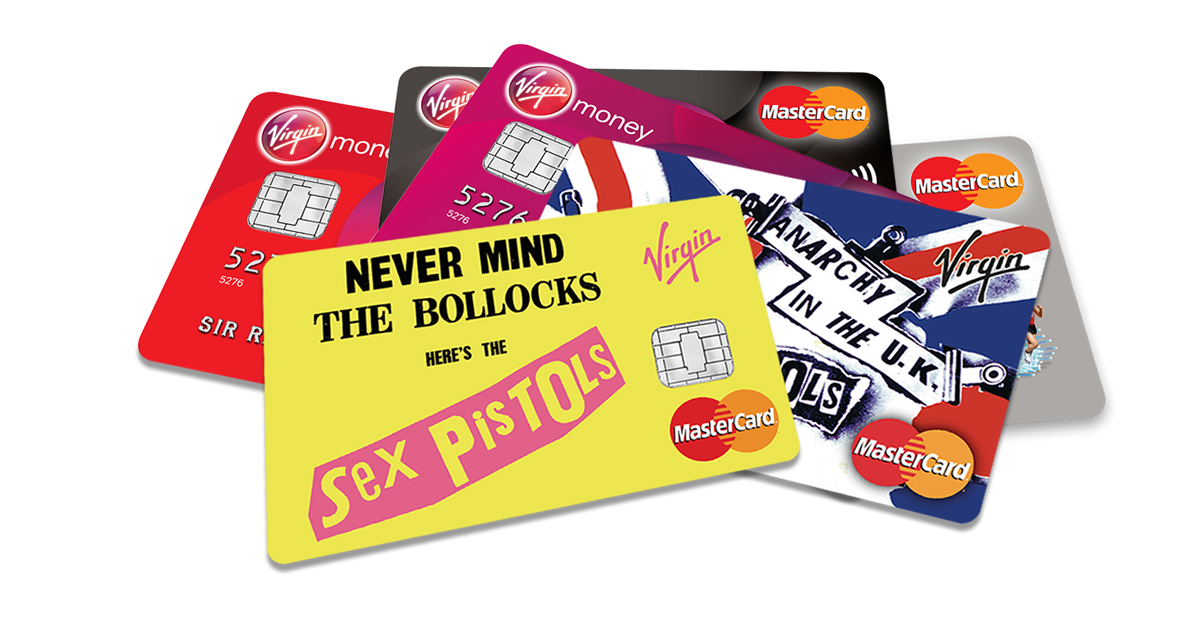 Remember that kid from high school with the purple mohawk and leather jacket? Well, he’s all grown up now, and Sir Richard Branson wants him to relive his youth with Sex Pistols credit cards, which were launched on June 7 and feature the cover the band’s 1977 album “Never Mind the Bollocks, Here’s the Sex Pistols.”

Branson got his start with Virgin Records in 1973, and four years later, the seminal British punk band, the Sex Pistols, joined the label. After such successes as Virgin Atlantic and Virgin Mobile, Branson launched Virgin Money, a bank and financial services company originally called Virgin Direct and founded in 1995. Virgin Money is backing these new Sex Pistols cards, which come with a variable 18.9 percent APR.

Some may be tempted to cry “Sellout!” However, at least one Sex Pistol has been involved in a commercial venture before. Former frontman John Lydon – known back then as Johnny Rotten – appeared in a 2008 British television spot for Country Life butter. And apparently, it was good business – Country Life’s parent company, Dairy Crest, reported that Lydon’s advertisement had helped sales increase by 85 percent in just one quarter.

It also wasn’t the first time legendary punk rock artists had their music used to hawk a brand’s wares. Here’s a look at a few more.

Nike (Iggy and the Stooges – “Search and Destroy”)

“Search and Destroy” is the lead track on the 1973 album “Raw Power” by Iggy and the Stooges. The band broke up before punk took hold, but they’re considered a primary influence and lead singer Iggy Pop has been called “The Godfather of Punk” countless times.

“Search and Destroy” was used to promote Nike Air sneakers during the 1996 Summer Olympics, just as the 1977 Iggy Pop heroin anthem “Lust for Life” was used in a Royal Caribbean Cruises TV spot. The latter commercial caused the satirical publication The Onion to run an article titled “Song About Heroin Used To Advertise Bank.”

The Ramones have been called “the first punk rock band” by MTV and a great many others. Their two-minute, three-chord songs recall a hybrid of Black Sabbath and the Beach Boys, and though every single original member of the band is no longer with us, they continue to influence bands to this day.

Diet Pepsi used their 1976 song “Blitzkrieg Bop” in a 2005 commercial, but they weren’t the only ones to do so. It has also been used to advertise the Coppertone Sport Pro Series, the Cartoon Network and Taco Bell.

The Buzzcocks are less well-known than the Stooges and the Ramones, but no less significant. The British band shared stages with the Clash and the Sex Pistols during punk rock’s heyday, and even had the distinction of seeing their songs banned by BBC radio. In 2007, AARP, formerly known as the American Association of Retired Persons, used one of their songs in a commercial.

The song was “Everybody’s Happy Nowadays” and the commercial depicted energetic people of various ages at a birthday party, with a tag line that read, “An organization for people who have birthdays.” Since it opened up its membership to anyone over 50, retired or not, the song may have been used as a gambit to disabuse people of the notion that it’s an organization for mildewed pensioners.

The repertoire of punk forerunners the Velvet Underground includes such tracks as “Sweet Jane,” an upbeat number ideal for promoting any product. But Dunlop Tyres, a British subsidiary of Goodyear Tire and Rubber Company, decided to use the S&M anthem “Venus in Furs” instead for a 1993 spot. According to the advertising publication Campaign, this was not an oversight.

“Tyres are invariably distress purchases, making branding difficult,” it said. “Dunlop attempted to change that with a visual tour de force aimed at fixing its name firmly in drivers’ minds… Set to the Velvet Underground’s Venus in Furs, the ad had a nightmarish quality and was one of the most original and controversial creations of the 90s.”

The Clash’s 1979 recording of “Pressure Drop” found its way into a commercial for the 2008 Nissan Rogue, presumably because it’s the most punk rock mid-size crossover SUV in automotive history. Prior to that, their song “London Calling” had appeared in commercials for the Jaguar X-Type, but writer Rob Walker said in The Boston Globe that anti-capitalist punk songs are as good as any other when it comes to advertising.

“Where you or I might hear a counterculture anthem, there is also a collection of sounds and lyrical bites ready to be stripped for parts,” he wrote. “From an ad-maker’s point of view, even the most edgy rock ‘n’ roll is just so much musical wallpaper.”