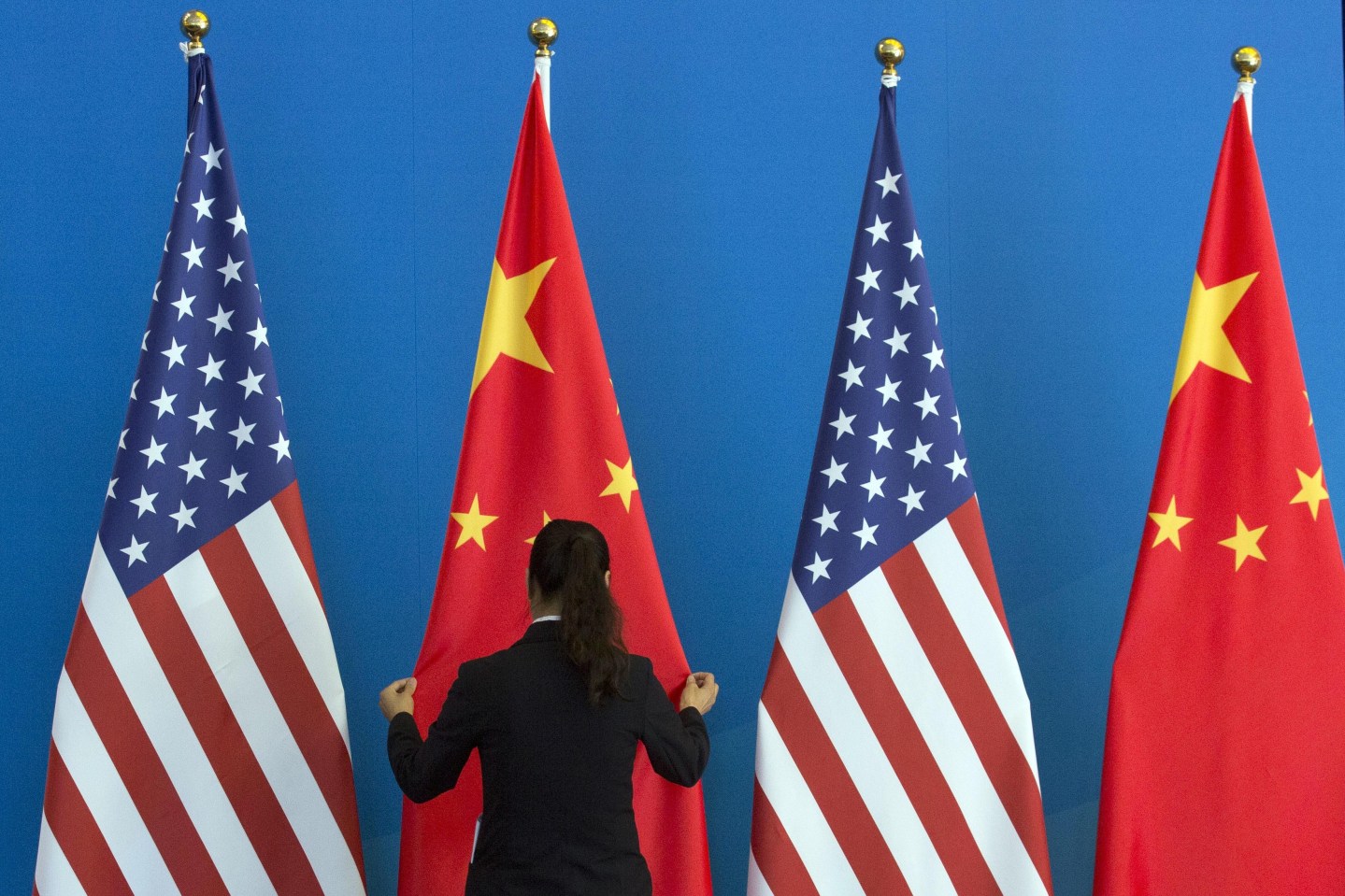 A Chinese woman adjusts a Chinese flag near US flags before the start of a Strategic Dialogue expanded meeting between China and the US during the US-China Strategic and Economic Dialogue held at the Diaoyutai State Guesthouse in Beijing on July 10, 2014. The US and China discussed trade and business concerns on July 10 -- with currencies and property rights among the thorny issues on the agenda -- as the world's two biggest economies held wide-ranging annual talks. AFP PHOTO / POOL (Photo credit should read NG HAN GUAN/AFP/Getty Images)
Photograph by Ng Han Guan — AFP/Getty Images

Last week, it was revealed that Chinese hackers launched a massive cyber attack on the U.S. government, affecting 4 million current and former federal employees. The blackmail potential of such information, and the harm to U.S. national security, should be obvious. And the connection with China should not be surprising since the U.S. has been fighting this war for some time. A senior Chinese government official even stated recently that the country is assembling an “online army,” which means that the cyber war between the U.S. and China is bound to heat up.

And given that this comes in the wake of aggressive Chinese military posturing over disputed islands in the South China Sea, you would think the two nations really are at the brink of war.

Under normal circumstances, they would be, but the fact is that neither China’s military saber rattling nor its cyber incursions will make any real difference to American foreign policy toward the Asian nation, which has often been one of loud talk and little action. The reason for this is simple: trade. China is a huge trading partner for the U.S. and a fertile market for U.S. corporations, which makes any possibility of a real war breaking out highly unlikely.

At the height of the Cold War, China’s communist regime was viewed as a credible threat to the U.S. and accordingly treated as an enemy to be watched and engaged with as little as possible. Today, China’s growing economic strength, selective free market reforms, and the explosion of global trade have made isolation impractical and blurred the lines between a political and business relationship. The Chinese are no longer an enemy, but an eccentric (and very flawed) business partner whose quirks may need to be tolerated — albeit, grudgingly.

That’s ironic, of course, especially given that while the U.S. imported $466 billion of Chinese goods last year, China only imported $124 billion of American goods, according to the United States Census Bureau. The implication is that even though China is valuable to the U.S., bilateral trade is boosting China’s economy more than that of the U.S. (part of this is due to alleged currency manipulation by China, which weakens the yuan against the dollar and makes Chinese goods cheaper for U.S. buyers). In addition, the Trans-Pacific Partnership and other trade agreements in the works could also wind up benefiting China even more than the U.S.

Again, you would think these things would put America in a strong position to stand up to China’s military and cyber bullying. But another factor is that U.S. companies have $70 billion invested in China and when its largest companies, such as Apple (AAPL) and Netflix (NFLX), pump tremendous resources into capturing the Chinese market, the last thing they want is a real war. Goldman Sachs CEO Lloyd Blankfein underscored this point recently, saying during a shareholder meeting that “Peace is good for Goldman Sachs” (referring to China). More importantly, these multinationals wield a lot of clout in Washington and can at least tacitly influence the State Department’s policies towards China.

Yet another reason that nothing much is likely to happen is because China, despite its periodic hacks, flexing of military muscle, or counter-recriminations against the U.S., would be unwise to inflict any real damage to its relationship with its trading partner. Being as dependent as China is on the U.S. for its own economic prosperity, any extreme action that would make it necessary for the U.S. government to respond with force would be killing the goose that lays the golden egg, and the Chinese government is probably too smart for that.

It’s important to keep in mind, however, that China could use the knowledge that it gains through cyber hacks and use the threat of military action, whether direct or against U.S. allies like Japan and India, to force more favorable trade terms with the U.S. and keep it off its back on issues like human rights and currency manipulation. This type of potential blackmail should worry the American government.

But for now, this is a fake war between two giants meant to generate headlines and extort small concessions from each other behind the scenes, but nothing more serious than that. The business community need not worry.

S. Kumar is a tech and business commentator. He has worked in technology, media, and telecom investment banking. Kumar does not own shares of the companies mentioned in this article.