Getting the boot: Companies that dropped off the Fortune 500 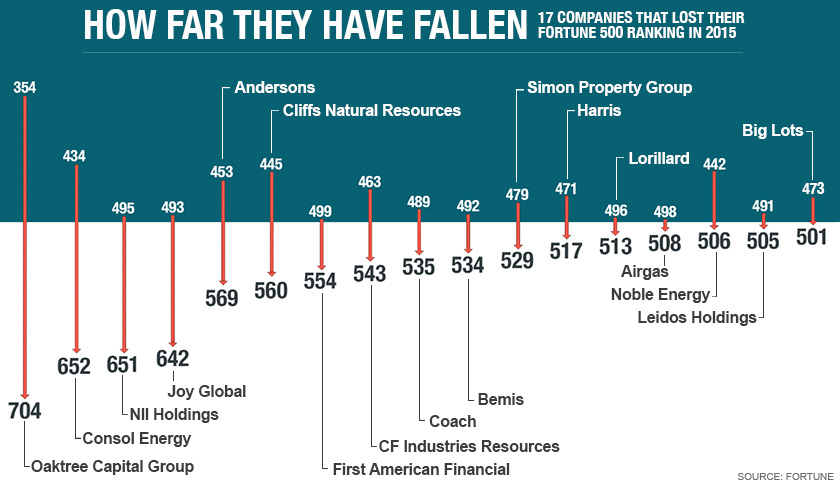 For 500 companies, the annual unveiling of the Fortune 500 means another year of being able to brag about being the best in business.

But, alas, there are more than 500 companies in the U.S., and the finite number of spots available on the Fortune 500 means that each year some companies are going to exit the prestigious list.

All in all, 26 companies that were featured on last year’s list are not to be found in the current ranking.

Of that number, 17 simply fell far enough that they are no longer one of the 500 biggest companies in the U.S.; eight were involved in some sort of M&A activity that left them either no longer in existence, or too small to qualify; and one, Hertz Global Holdings (HTZ), didn’t release data or file with the SEC in 2014 due to accounting errors.

Of the 17 companies that were simply now too small for the list, two of them are companies everyday consumers will likely recognize — retailers Big Lots (BIG) and Coach (COH). Big Lots actually has a very special place on the list this year — it finished spot 501, just an inch away from glory. Coach, meanwhile, shows up at 535.

The biggest drop-off for a company no longer in the Fortune 500 belongs to Oaktree Capital Group (OAK), an asset management firm based in Los Angeles, Calif. It was a down year for Oaktree as its specialty, distressed and high-yield debt, was an investment area lacking in opportunity, according to Barron’s. Oaktree fell 350 places this year, from 354 to 704.

The company that saw the smallest fall to end up outside of the 500 was tobacco company Lorillard (LO). Last year it was at 498, and this year it was at No. 508.

The biggest trend on this years list is the downturn of the natural gas and mining industry, which saw three companies fall out of the Fortune 500: Noble Energy (NBL), which went from 491 to 505; Cliffs Natural Resources, 445 to 560 (CLF); and Consol Energy (CNX), from 434 to 652. The downturn in the oil market and falling crude oil prices is likely to blame for this.

For the companies left off the list this year, despair not. There’s always next year. After all, for each company that leaves the list, another space opens up.