Today’s stock market: Living in a world of low expectations 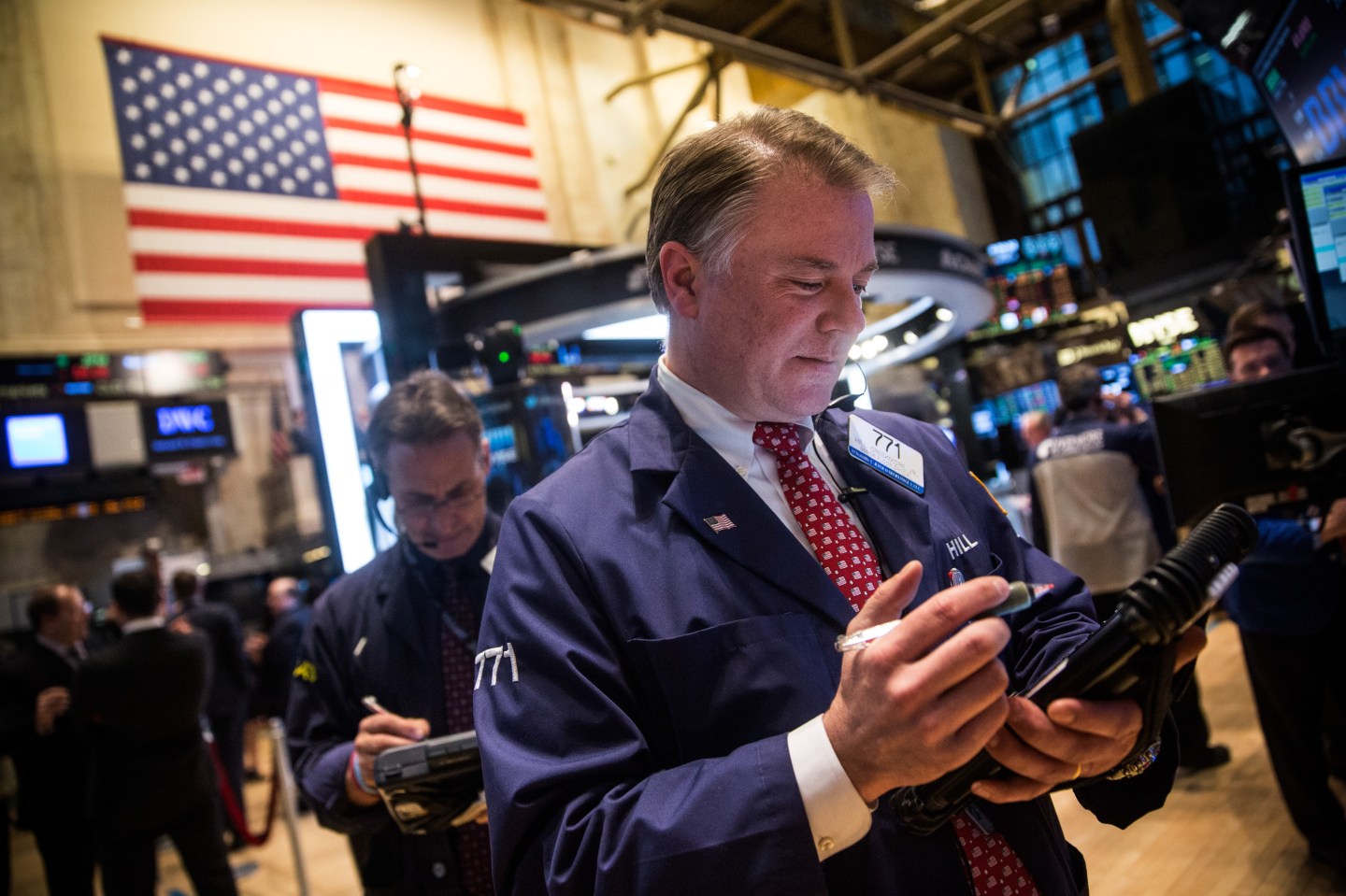 The S&P 500 is hovering near record levels, yet the earnings that are supposed to justify those big prices––and produce even more gains––are starting to wane. So it’s past time for investors to examine whether stocks are drastically overvalued. And if even the best minds can’t resolve the bubble-or-no-bubble issue, folks should get realistic about the returns they can expect when valuations look this rich.

Over the weekend, Goldman Sachs released a report exploring whether equities are now in “dangerous territory.” Goldman should be commended for even-handedly raising the question, since Wall Street firms almost invariably extoll stocks as a “buy” at any price. Goldman invited two renowned economists with starkly divergent views––Robert Shiller of Yale and Jeremy Siegel of the Wharton School––to debate the issue. Shiller is the inventor of one of the most respected measures of determining if shares are cheap or expensive, known as the CAPE, or cyclically-adjusted price-earning ratio. The CAPE calculates a price-to-earnings ratio based not on current earnings but on a 10-year average of inflation-adjusted profits. The formula smoothes the peaks and valleys that can make shares look cheap when profits are inflated and expensive when they’re unusually low.

As Shiller tells Goldman, today’s CAPE is cause for worry. It now sits at well over 27, its highest level since 2000 and more than 10 points above its historic average. This suggests that profits are far higher than normal and should either plateau or sink from these heights, a process that may be already underway. Shiller concedes, “I don’t have enough data to prove it’s a bubble,” but he warns that at these prices, investors probably won’t see the returns they hoped to achieve.

Meanwhile, Siegel argues that today’s prices are “completely justified” by low interest rates. For Siegel, talk of a bubble is totally misguided and stocks remain an excellent buy.

By coincidence, a third famous economist joined the fray. On June 1, Ben Bernanke expressed a bullish view in a blog post. The former Fed chairman stated that the surge in prices since 2010 simply compensates for the steep drop in 2008 and 2009. He said that the big spike in stocks simply restores share prices to a level that he describes as “normal.”

What should we make of these contrasting opinions? An excellent source for clarifying the issue is Chris Brightman, the chief investment officer of Research Affiliates, a firm that oversees strategies for $170 billion in mutual funds and ETFs. Stocks are indeed expensive by historical standards, says Brightman. But it’s impossible to determine whether we’re in a “new normal” where multiples will remain elevated, or whether they’ll return to the lower levels that prevailed in the past. “It’s a mistake to assume ‘mean reversion,’ although it could happen,” says Brightman. “Stocks could remain expensive for a long time.”

It’s indisputable that when prices are elevated versus earnings, gains will be low in the future. Brightman warns that they’ll be a lot worse than most investors, and the standard academic analysis, would reasonably predict. The reason, he says, is that U.S. companies keep and reinvest most of their profits, and the returns on those retained earnings are surprisingly weak. Most stock market experts ignore that shortcoming. But investors should understand what it means for their portfolios––and the numbers are daunting.

That puts the earnings yield—the inverse of the P/E—at 4.5%. It’s widely accepted in investment circles that the earnings yield, plus inflation, is an excellent proxy for future returns. In theory, those gains come from two factors that, added together, bring a “real return” equal to the earnings yield. The first is the dividend. Companies are paying out around 40% of their profits in dividends, for a yield of 1.9%. The second is retained earnings. Corporations keep and reinvest 60% of their profits. Of the 4.5% yield, that’s 2.6%. The standard assumption is that plowing profits into investments would raise earnings by the same amount, 2.6% a year, and generate a similar rise in the stock price. So the total return should be the 4.5% earnings yield plus, say, 2% inflation, or 6.5%. Not great, but a lot better than bonds.

In the real corporate world, it doesn’t work out that way. To be sure, dividends are reliable. “They’re cash you can count on,” says Brightman. You can put the 1.9% yield in your pocket. But what about the extra 2.6% that’s expected to flow from the profits that companies retain and are supposed to be investing wisely? “Companies waste retained earnings on buying stock to compensate for option grants, and making vanity acquisitions,” explains Brightman. “You can create any story you want to explain it, but the facts are that the gains from retained earnings are way below what’s expected.”

For every 1% companies retain, they generate half, or 0.5%, in extra profits, says Brightman. In effect, management throws away half of the money they harbor by making poor investment decisions. Hence, the 2.6% that’s reinvested today will yield annual gains in profits, and share price, of only 1.3% in the future.

Investors will get a lot less than the 6.5% that they’d receive if managers did a good job stewarding retained earnings. Instead, they’ll receive the 1.9% dividend yield, plus 1.3% in capital gains, for a total of 3.2%, plus another 2% for inflation. All told, that’s around 5.2%.

The squandering of retained earnings makes it extremely difficult to garner the double-digit returns Wall Street is always promising. Even if the S&P’s multiple dropped to 16, the expected return would reach only 6.5%, mainly because of a rise in the dividend yield, which, like bond yields, increases as price fall.

Not that double-digit gains are impossible. They just never, or almost never, spring from periods like this one, where stocks are extremely pricey. They’re the legacy of severely depressed times, when panic reigns and P/Es crater to single or low-double digits. Notable examples are the 2000 to 2002, and the 2008 and 2009 period. The boom market of recent years is an offspring of the financial crisis. Investors who buy stocks now can probably do better than buying bonds. Returns on both will be poor versus history. It’s a new normal, all right––a world of low expectations.