Queen Elizabeth’s paycheck is under review to be cut 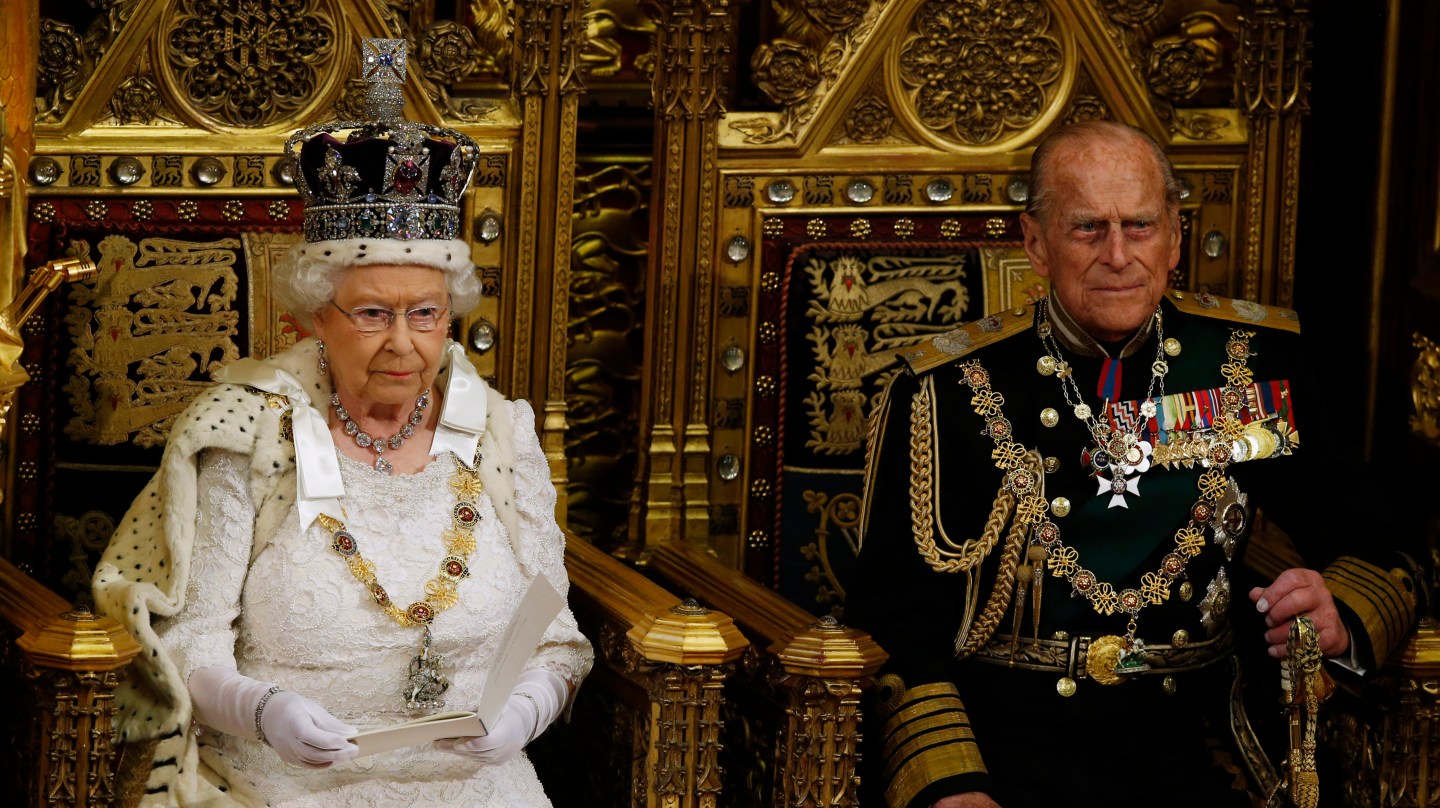 LONDON, ENGLAND - MAY 27: Queen Elizabeth II sitting next to Prince Philip, Duke of Edinburgh looks up during the Queen's Speech in House of Lords at the Palace of Westminster on May 27, 2015 in London, England. The Queens Speech outlines her governments legislative plans for the forthcoming parliamentary year and the laws and bills they hope to pass. (Photo by Alastair Grant/WPA Pool/Getty Images)
Photograph by Getty Images

Eight hundred years since the English first put a leash on their sovereign’s spending habits, they’re about to tighten the squeeze on Queen Elizabeth.

The daily The Independent reports Monday that the new government is to review current legislation that guarantees the Royal Household a 15% cut in the profits from the Crown Estate, a vast property portfolio that owns stuff from London’s swanky Regent Street to Ascot Racecourse.

That’s because the profits on the Estate have risen far more sharply in recent years than forecast at the time the current arrangements were drawn up in 2011.

Under British law, the Crown Estate pays all its profit out to the Treasury, which then passes 15% back to the Royal Household. There’s also a clause that states that the Treasury will never cut the Queen’s budget in absolute terms. For the current financial year, it’s just over $60 million. That money is supposed to cover both the Queen’s private expenses and her official duties.

But because the Estate’s profit has risen by some 29% in the last three years, the current formula is giving the Queen a big pay raise–just as a new government is about to take an axe to the rest of the country’s public spending, starting with welfare and (although they won’t admit it yet) most probably ending with the politically sacrosanct National Health Service. That’s a recipe for a PR disaster, especially for a Conservative government that is in any case habitually accused of favoring the upper classes (Prime Minister David Cameron himself is descended from an illegitimate child of King William IV–had he lived 500 years ago, most people would have argued he had a better claim to the throne than Elizabeth).

The Independent quoted a spokesman for Buckingham Palace as saying: “A review will take place after April 2016 to ensure that the grant provides the resources needed to support the Queen’s official duties.”

The Royal Household’s budget has always been a pleasingly easy target for the headline writers and satirists. Last week’s ceremonial opening of parliament, in which the Queen, as usual, read out the government’s agenda for the next five years, triggered the usual gags about “Woman In 10-Million-Pound Hat Calls For Austerity.”

But the ceremonial pomp, like much else besides in post-crisis Britain, is run on an uncomfortably thin margin. Staff at Windsor Castle threatened industrial action last year, fed up with years of meager pay increases. And a parliamentary report found that Buckingham Palace’s 60 year-old boilers were leaking so badly that they threatened many of the priceless works of arts hanging in the floors below them.

With a painful irony, the review is coming only weeks before the eight hundredth anniversary of the signing of Magna Carta in 1215, the first successful attempt by the English to limit the crown’s sovereignty. Her Maj would likely argue that bringing the Palace’s heating system into the 21st century isn’t quite as egregious as King John’s robbing the nobility and merchant classes to fund disastrous wars in France. Still, as the staff at Windsor (and soon every ministerial spending head) will tell you, it’s all relative.