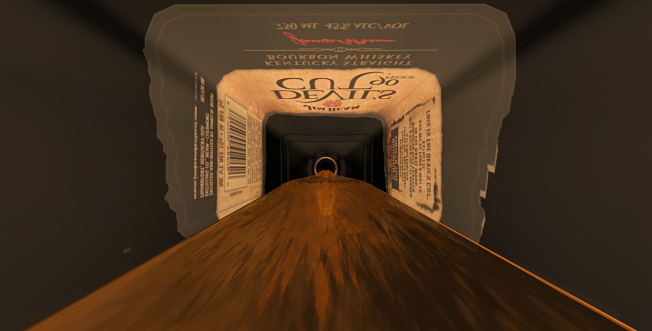 At sampling events across the U.S, consumers 21 and over can take a virtual reality ride from the perspective of Jim Beam bourbon being made, as part of an on-going 2015 promotion for Jim Beam’s new Devil’s Cut Bourbon.

“There is quite a bit of crossover between our target demographic and technology early adopters, which is one of the reasons VR was a perfect fit,” says Rachel Harris, commercial marketing director at Beam Suntory (BEAM).

According to Harris, virtual reality allows the company to offer a digital experience that can’t be replicated through traditional sampling efforts, or even through enhanced video technology. Harris says the goal was to cut through the clutter in bars and help Devil’s Cut stand out among the crowded bourbon category, and to allow consumers to not only taste the product, but learn the ins and outs of how it’s made.

Rather than viewing a 360-degree VR video distillery tour like Patrón used for its tequila VR experience, consumers take a roller coaster-like ride from the perspective of Jim Beam’s bourbon. They start in the pipes of the bourbon still, traveling through a rack house, a flaming barrel lid, into a barrel and eventually, being poured into a shot glass. When users take off the VR headset, the virtual shot glass has become a real shot glass with a sample ready for them to drink.

“These days, it’s so important to be able to explain how the product is made—in an engaging way—whether you have 5 minutes or 5 seconds with a consumer,” Harris says. There are more than 750 events planned for 2015 in 16 markets and 250 bars, with each venue having one or two Samsung Gear VR headsets, according to Harris.

Harris believes one reason her brand and Patrón have embraced VR early is because today’s consumers are surrounded by technology and it’s an integral part of their daily lives. As a result, consumers’ needs and desires around brand engagement have changed. She says they are looking for brands that can be integrated into their daily lives.

“VR allows brands to leverage technology to engage with consumers in a dynamic and impactful way unlike any they have ever had before,” Harris says. “Consumers at these events have literally run back to grab their friends to tell them they have to experience it.”