Is Social+Capital’s Chamath Palihapitiya the future of venture capital? 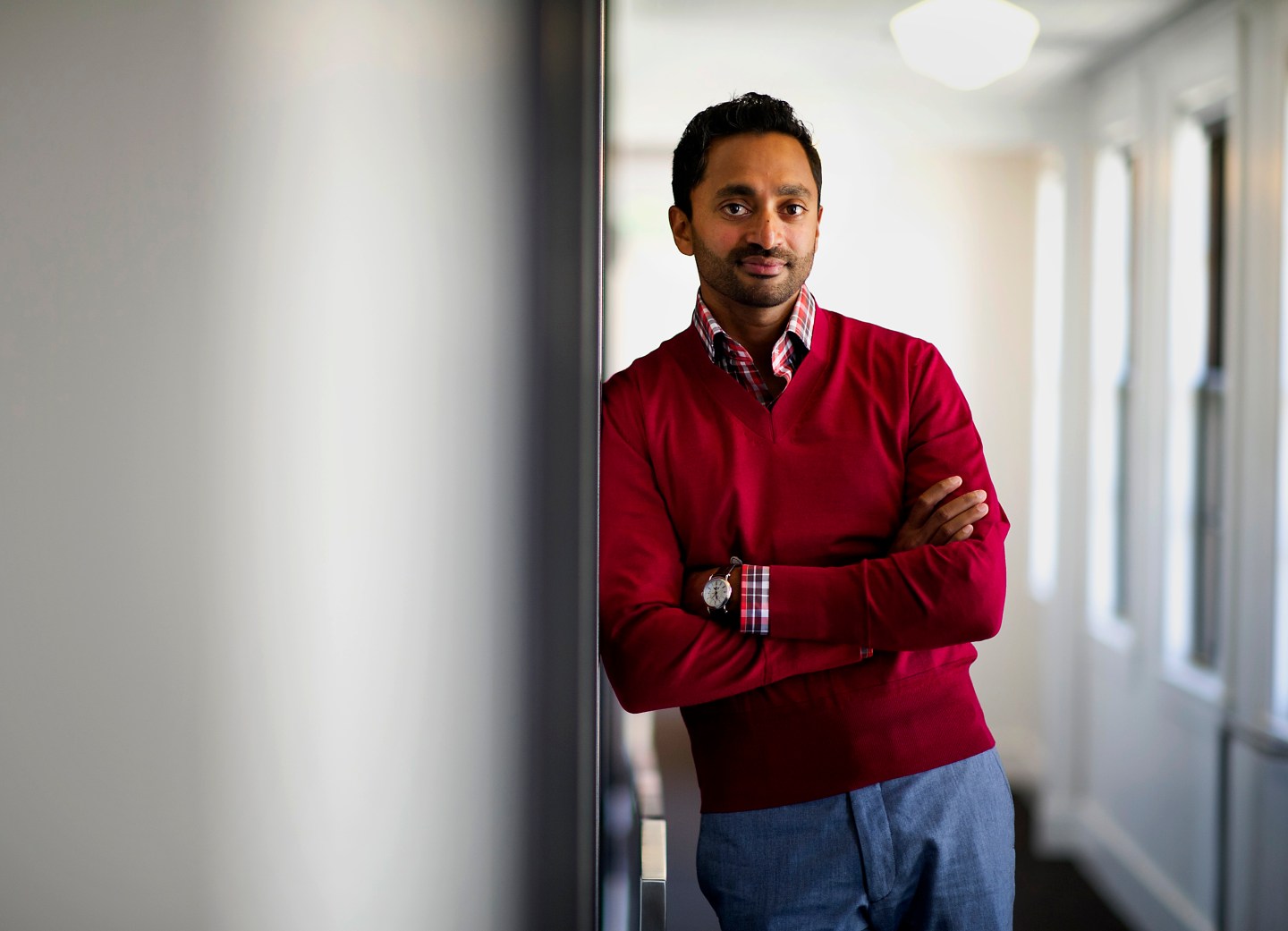 Chamath Palihapitiya, managing partner and founder of The Social+Capital Partnership, stands for a photograph after a Bloomberg West Television interview in San Francisco, California, U.S., on Tuesday, May 21, 2014. After a four-year career at Facebook Inc., where Palihapitiya worked on mobile products and expanded the company internationally, he left to form Social+Capital. Photographer: David Paul Morris/Bloomberg via Getty Images
Photograph by David Paul Morris — Bloomberg via Getty Images

Here’s an irony of Silicon Valley startup culture: While many new tech companies are conceived and run by fresh-faced, 20-something entrepreneurs, they’re often funded by venture-capital titans like Accel, Kleiner Perkins, Greylock and Sequoia—partnerships that date back to the 1970s and ‘80s, led by executives old enough to remember using typewriters.

Chamath Palihapitiya doesn’t fit this pattern. At age 38, he’s closer in age to the millennials than to the VC baby boomers, with a generationally appropriate resume, having helped Facebook go from campus sensation to global phenomenon (and having become very wealthy thanks to its IPO). Palihapitiya is now best known for a VC fund of his own, Social+Capital Partnership, which he launched in 2011. He’s also an avid poker player, and a partial owner of the NBA’s Golden State Warriors.

Palihapitiya and his team have just finished raising $600 million for S23P’s third (and biggest so far) investment fund. But the founder is also in a frame of mind to talk about roads not taken–in particular, an offer from John Doerr and Kleiner Perkins to acquire S23P. That deal fell through, as Fortune first reported in January; in a recent conversation, Palihapitiya went on the record for the first time about why it didn’t work out.

Last December, John Doerr asked Palihapitiya to join him on a walk in Old Palo Alto, near Doerr’s home. The request came at a fraught time for Palihapitiya: Just days before, his father had passed away suddenly from complications from diabetes, and he was grieving. In the wake of his father’s death, he had opted to put off traveling for S23P’s latest fundraising round.

“The purchase of a VC firm by another in the venture world is extremely rare,” says Peter Wendell, a Stanford Business School professor and the founder and managing director of VC firm Sierra Ventures. “If it does happen, it’s normally because of the value of the investors in the acquired firm.”

Doerr’s proposal, from one of the best-established names in venture capital, was a vindication of just how far S23P and Palihapitiya had come. (Financial terms were not disclosed by either Palihapitiya or Kleiner Perkins.) His own background stands out in Silicon Valley for its relative modesty.

After emigrating from Sri Lanka as a young child to escape the country’s civil war, Palihapitiya grew up on welfare in Toronto, where his mother cleaned homes for a living. He ended up going to University of Waterloo, home to a top-notch engineering program. After a stint in finance, Palihapitiya worked for startup Winamp, and, later, ran AOL’s (AOL) then-popular messaging service, AIM. What he’s best known for, though, is his role in Facebook’s (FB) rapid expansion, as the leader, beginning, in 2007 of the company’s user growth, mobile and international team. During his tenure, which ended when he left in 2011, Facebook grew from 50 million users to 700 million users.

When Palihapitiya and two contemporaries, Ted Maidenberg and Mamoon Hamid, founded S23P in 2011, they felt they stood apart from the bigger firms in the field. Those firms tended to be dominated by people who either had MBAs or had founded and sold companies—none of that applied to them. What’s more, the bigger firms’ leaders also tended to be older, and white. Thirty-something ethnic minorities like Palihapitiya and Hamid were (and are) rare in the upper ranks.

But S23P also stood out strategically, with a focus on technology in healthcare, financial services and education, and on software as a service. S23P started investing in health and education when those fields were being largely neglected by the VC community. When David Van Sickle, the CEO of Propeller Health, a company that makes intelligent sensors that gather data from asthma inhalers, went to pitch VCs in 2012 and 2013, most investors showed little to no enthusiasm about digital health, he recalls. Social+Capital was one of the only investors that actually took the time to hear about what the company had created, and as Van Sickle says, “The firm’s involvement has been a big part of our success.” (Last year, Propeller was able to raise a $14.5 million round of funding from a publicly traded healthcare growth fund, Safeguard Scientifics (SFE))

With assets of $275 million, it backed the likes of enterprise social network Yammer, which was purchased by Microsoft (MSFT) for $1.2 billion in 2012; SurveyMonkey; Remind, a fast-growing messaging app for teachers; and Syapse, a cancer genomics platform which counts Stanford Hospital in its customer base.

With its second fund, raised in 2013, the firm made investments in workplace communication app Slack, in its Series B round (Slack is now worth over $3 billion); and online financial manager Wealthfront. Most recently, it has raised its third fund, at $600 million; new limited partners include Memorial Sloan Kettering.

Palihapitiya says the firm is now one of the fastest ever to reach $1 billion of assets under management, citing data from Mattermark, a company that has created a database of business intelligence on startups and VC firms. Mattermark CEO Danielle Morrill puts the growth in context: S23P has made good investments, she says, but has also entered the VC world at a time when the valuations of start-ups in general have been climbing at unprecedented levels. Unlike the better-established firms, Social+Capital has yet to go through a downturn.

Still, S23P’s rapid growth made it a tempting target for Kleiner Perkins, a firm that was looking for an infusion of a new talent. The firm has struggled to replicate its success as an early backer of heavyweights like Google and Amazon. Kleiner raised further questions about its future two years ago when it demoted what many thought were the next generation of investment leaders at the firm. And although the firm went on to win a discrimination case brought by former partner Ellen Pao, the trial was casting a shadow over the firm’s future when Doerr called Palihapitiya.

For all its troubles, Kleiner Perkins represented incredible success in Palihapitiya’s mind. He recalls thinking that his dad would have been impressed that the firm that backed Google and Amazon now wanted to buy the organization he had created.

The proposed deal soon hit an obstacle, however. Palihapitiya told Doerr that he envisioned a structure in which he and Doerr would be co-managing partners of the fund. He says he also wanted control over the other parts of the firm, including operations—an arrangement that would have made him, in effect, the president of Kleiner Perkins. Palihapitiya’s reasoning was that if KP wanted new blood, and leadership, then that new leadership should be making key decisions and overseeing the firm.

According to Palihapitiya, Doerr told him that he wanted to make the acquisition work. But he needed to build consensus among Kleiner’s other senior leaders, including managing partner Ted Schlein, growth fund partner Mary Meeker, and others. Palihapitiya believes that many of the partners balked, since a scenario with Palihapitiya and Doerr as co-managers would have disrupted the existing leadership structure.

Doerr and Palihapitiya kept trying to iron out an agreement even after these problems emerged. But after a few days, Doerr called Palihapitiya and said that the power-sharing proposal was a no-go: The Kleiner partnership was in a good place, Doerr said, and the structure S23P proposed just wasn’t going to work. Palihapitiya and his firm wouldn’t agree to anything else. And with that, the acquisition conversations came to an end.

A spokeswoman for Kleiner Perkins declined to comment. Doerr told Bloomberg earlier this year that Silicon Valley buzz about the talks with S23P was “overblown.” “We’re having lots of conversations with lots of people,” he said at the time. “That’s our job.”

With that chapter in the past, Palihapitiya says he’s now starting different conversations about his firm’s future, based on the question: What does the VC firm of the future look and act like? First, he says, the people inside the firm, and the entrepreneurs they back, should look different, he says: “I want the firm to look like what the world looks like. That means hiring and backing minorities and women.” Palihapitiya’s wife, Brigette Lau, was for some time the firm’s COO, but she now operates her own education-focused VC fund. S23P doesn’t currently have a female investor, but Palihapitiya says he is actively looking.

He says he may also start looking at consumer-oriented companies more intensively. Noticeably absent from S23P’s recent investments are the fast-rising consumer unicorns, including Pinterest, Snapchat, Stripe, Instacart and Uber.

In the meantime, S23P is trying other methodologies that could differentiate it from older-model VC firms. Early on, Palihapitiya, Hamid, and Maidenberg hired two of Facebook’s top data and growth experts, Ray Ko and Jonathan Hsu, to help them set strategy. In one unorthodox move, the firm has recruited around 30,000 people from across the country to use mobile phones that S23P tracks to catalogue which apps are being used on a daily or weekly basis. “There are literally thousands of apps being created every day and the hardest thing to do as a VC is to get the real truth of where people are using these apps,” Palihapitiya says.

The firm is exploring other tactics not typical to VC firms, including investing in real estate in San Francisco and Oakland so that they can offer office space or even housing to portfolio companies.

In an interview shortly before his untimely death, Dave Goldberg complimented his friend Palihapitiya on the scale of his ambitions. “Chamath is not in the VC world to play it safe. He’s not playing for singles or doubles, he’s playing for a home run,” said Goldberg. “Chamath genuinely wants to make an impact on the world.”