What’s the economic impact of the Amtrak crash? 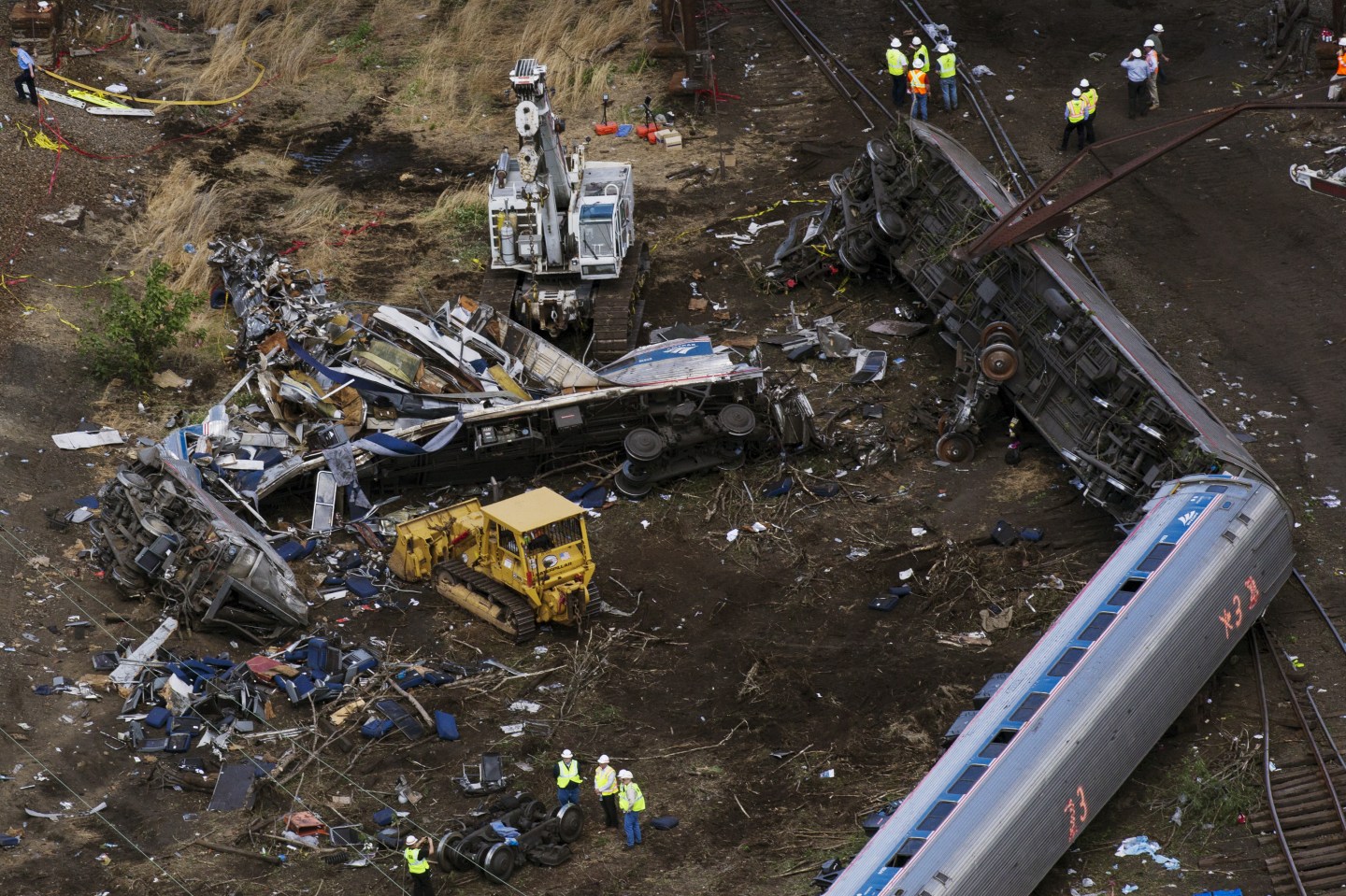 Emergency workers and Amtrak personnel inspect a derailed Amtrak train in Philadelphia, Pennsylvania May 13, 2015. The commuter rail route where an Amtrak train left the track on Tuesday was not governed by an advanced safety technology meant to prevent high-speed derailments, officials familiar with the investigation said on Wednesday. REUTERS/Lucas Jackson - RTX1CUNN
Photograph by Lucas Jackson — Reuters

An eighth body was recovered today from the wreckage of Amtrak Regional 188, which crashed on Tuesday in Philadelphia. The city’s mayor, Michael Nutter, announced that all 243 passengers had now been accounted for.

According to Federal investigators, the train was travelling from Washington D.C. to New York City at 106 miles per hour when it hit a sharp curve and derailed. Robert Sumwalt of the National Transportation Safety Board said that the posted speed limit on that part of the tracks was 50 miles per hour.

While many people are still reeling from this tragedy, a stubborn fact remains – thousands of people still have to travel through the Northeast Corridor which, according to Amtrak, comprises 457 mainline route miles travelled by 260 million passengers annually, at a rate of 2,200 trains per day.

The company said that the yearly contribution to GDP of that workforce is $50 billion, and a single day of lost service could carry a potential economic cost of $100 million to the businesses and consumers affected by it. Some prominent executives, including Abid Gilani, a senior vice president in Wells Fargo & Co.’s commercial real estate division, also were among the passengers who died in the crash.

While Amtrak service between Philadelphia and New York City is currently suspended, Amtrak is suggesting alternative modes of travel to avoid such a catastrophic financial loss. It recommends that travellers rely on free shuttle buses run by the Southeastern Pennsylvania Transportation Authority (SEPTA) into New Jersey, then take trains offered by NJ Transit, which is currently honoring Amtrak tickets. Nancy Snyder, a spokesperson for NJ Transit, said what everyone affected by this crash was surely thinking.

“We advise our customers to allot for additional travel time,” she said, according to CNBC.com. “We anticipate ridership to increase.” CNBC.com also reported that Delta Airlines was experiencing increased ridership between Ronald Reagan Washington National Airport and La Guardia Airport in New York City, and that American Airlines had added two round-trip flights between those two airports yesterday.

Affected travellers can also choose to ride the bus. Greyhound spokesperson Lanesha Gipson told Fortune in an interview that the company had implemented measures to accommodate the influx of customers.

“We’ve added additional buses,” she said. “We have 10 buses added from New York City to Philadelphia and six buses from New York to D.C. We’re honoring all Amtrak tickets.”

She said that although the company had no hard numbers indicating exactly how large the increase in ridership was, she acknowledged an increase in customer volume. However, she added that Greyhound would be able to handle the overflow, both in terms of available buses and in terms of cost to the company.

“We don’t foresee any challenges accommodating this surge in ridership,” she said.

Marc Magliari, Amtrak spokesperson, said it is the intention of Amtrak to reopen the affected segment of the Northeast corridor by Tuesday.

So what can be done to prevent this sort of thing from happening again? Reuters reported yesterday that Amtrak is in the process of installing a positive train control (PTC) system, a technology that automatically slows trains moving too fast into a zone such as the sharply-curved section of rail where the derailment occurred. Robert Sumwalt of the National Transportation Safety Board said that such technology would have made Tuesday’s accident impossible.

“Based on what we know right now, we feel that had such a system been installed in this section of track, this accident would not have occurred,” he said. The entire U.S. rail industry is required by law to have this technology in place by the end of 2015.