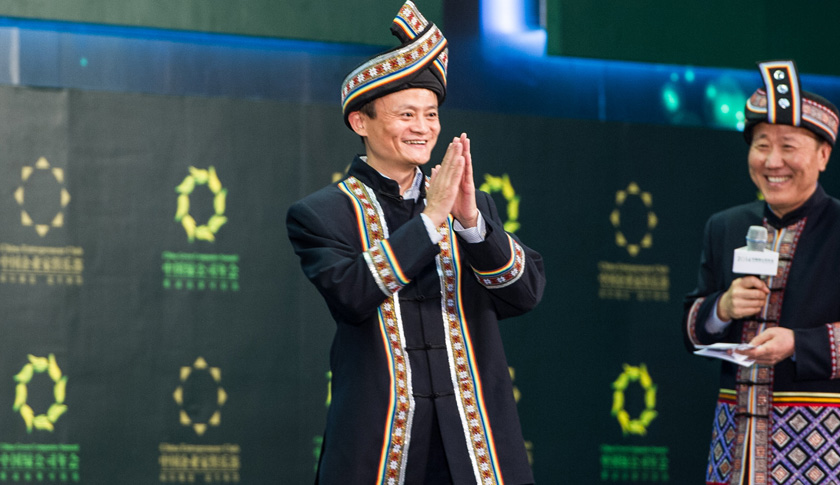 Jack Ma Yun, left, Chairman of Alibaba Group, dressed in a costume of Chinas Zhuang ethnic minority, greets guests next to Zhu Xinli, founder of Huiyuan Group, at an entrepreneur fashion show during the 2014 Annual Summit of China Green Companies in Nanning city, south Chinas Guangxi Zhuang Autonomous Region, 21 April 2014. More than 1,000 entrepreneurs on Sunday (20 April 2014) flocked to the southern Chinese city of Nanning, known as Chinas green city, to attend the 7th Annual Summit of China Green Companies, organized by the China Entrepreneur Club. A hundred companies, including Alibaba, IBM and Wanda group, were chosen as green companies this year. The summit also discusses the impact of SOE (state-owned enterprise) reforms and diverse ownership and how Chinese banks should face the challenges coming from Internet finance.
Photograph by Hong jianpeng — Imaginechina/AP

“Daniel is a proven international business leader and innovator with a strong track record of delivering results,” Alibaba Chairman Jack Ma said in a statement on Thursday. He added there is “no better person to lead Alibaba Group as we embark on the next stage of our growth.”

Zhang has served as Alibaba’s (BABA) COO since September 2013, although he has held other management positions in his eight years at the company. Before joining Alibaba, Zhang was CFO at online game developer Shanda Interactive (GAME) for two years. Zhang takes the reins from current CEO Jonathan Lu, an executive that succeeded Ma as CEO just two years ago.

The change at the top of Alibaba’s leadership comes roughly eight months after the e-commerce company’s splashy debut on the U.S. stock market. Shares on the first day of trading soared 38% and settled at $93.89, giving the company a market capitalization of over $231 billion at the time.

But the stock, which traded near $120 per share in November, has spent most of its time in decline. Shares are below the opening trading price, even after factoring in the roughly 10% gain this Thursday morning as Alibaba also reported quarterly results that exceeded Wall Street’s expectations. The stock is worth about $88.50 in premarket trading.

Alibaba’s, essentially China’s version of eBay, is facing some challenges at home as the economy is projected to report slowing growth and as more consumers turn to mobile shopping, a trend that hurts advertising revenue. Meanwhile, efforts to seek growth outside China haven’t yet gained traction.