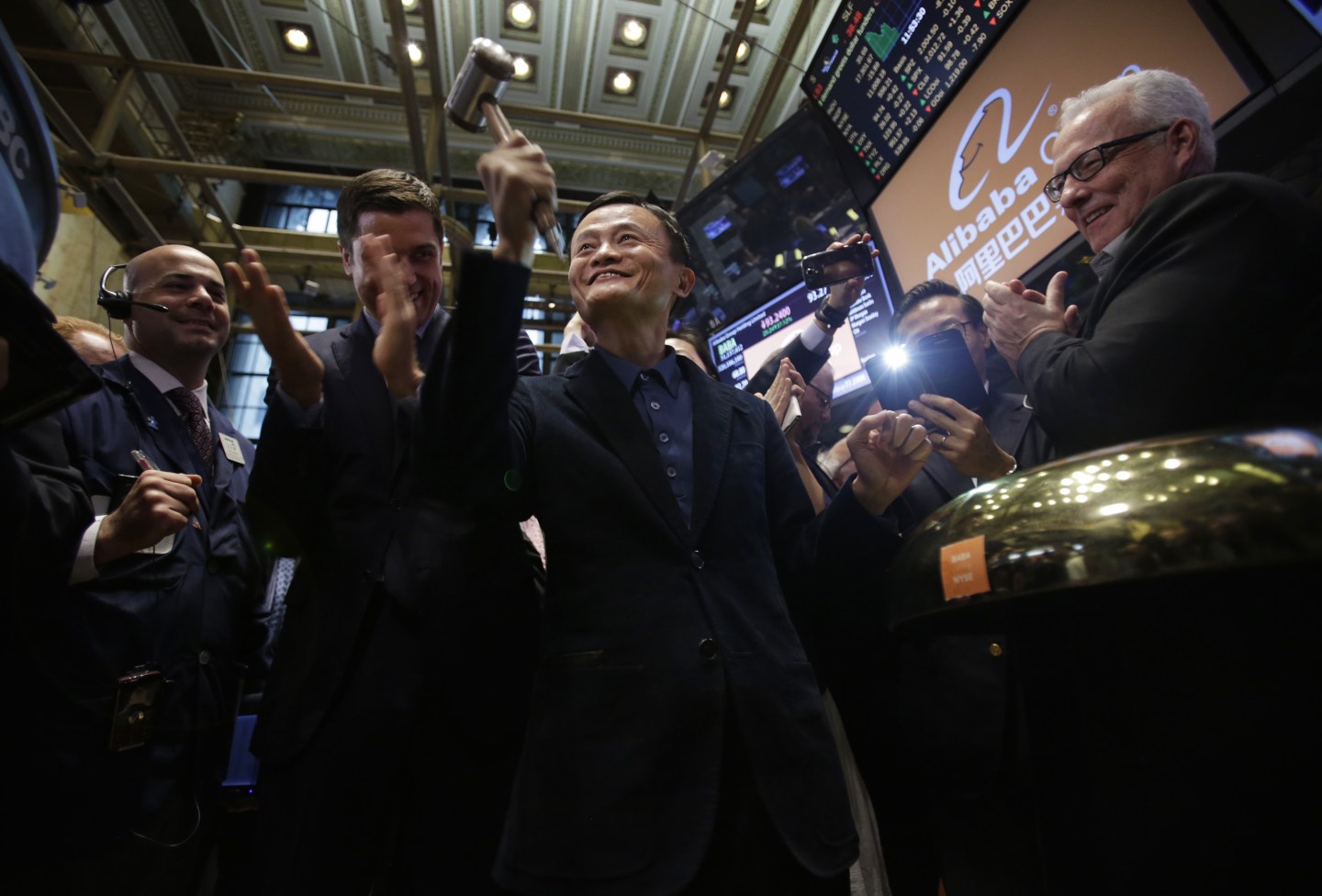 Shares of Chinese e-commerce giant Alibaba ended the first day of trading with a 38% gain, as investors enthusiastically angled for a piece of the largest stock offering to ever debut on the U.S. market.

As Fortune‘s Shawn Tully reported earlier this month, the first-day pop is one of Wall Street’s prized events. The term evokes images of exploding champagne corks and is the hallmark of a successful IPO, although it also means underwriters sold the shares too cheaply and thus leave money “on the table.” However, CNBC reported Friday morning that underwriters may make use of an overallotment option, which is called a “green shoe,” meaning more shares of the company could be sold, potentially raising over $25 billion and making the IPO the biggest in history.

When co-founder and chairman Jack Ma was asked about the talk of shares opening around $90 per share, he answered: “I just get excited” before he was quickly shuffled away from the camera by his team.

Meanwhile, shares of Yahoo (YHOO) — which is pulling in billions from the 121.7 million shares of Alibaba it is selling — ended trading down about 3% Friday.

Alibaba, essentially China’s version of eBay, kicks off its first day of trading worth far more than Amazon.com (AMZN), which has a market capitalization of about $150 billion. Alibaba’s first-day pop is also so far better than Amazon’s 1997 IPO, when shares jumping 30% above its opening price. Times were certainly different when Amazon (then described as an online bookstore) debuted. Now an e-commerce behemoth that sells almost anything a consumer could want, Amazon only raised $54 million in 1997, valuing it at less than $500 million.
[fortune-brightcove videoid=3793424864001]

Alibaba started as an online marketplace for businesses to sell products to one another but soon expanded into consumer sales and online payments. Annual revenue exceeded more than $8.4 billion for the latest fiscal year, with a bulk of that revenue coming from the Chinese market. Alibaba — with 279 million annual active buyers — has said China’s online shopping population is relatively underpenetrated and believes online shopping will increase, especially as that nation’s mobile base and usage continues to expand.

The Chinese company’s offering is the most high profile debut since Facebook (FB) listed its shares in 2012. The social-media company’s shares started trading at $38, and while the stock was widely expected to soar, only ended the day up 23 cents. That debut was plagued by computer glitches that some said undermined confidence in the stock, though shares eventually rebounded and are now trading above $76 a share.

Click here for more from Fortune on Alibaba’s IPO.