Why did Burger King stand with Floyd Mayweather? 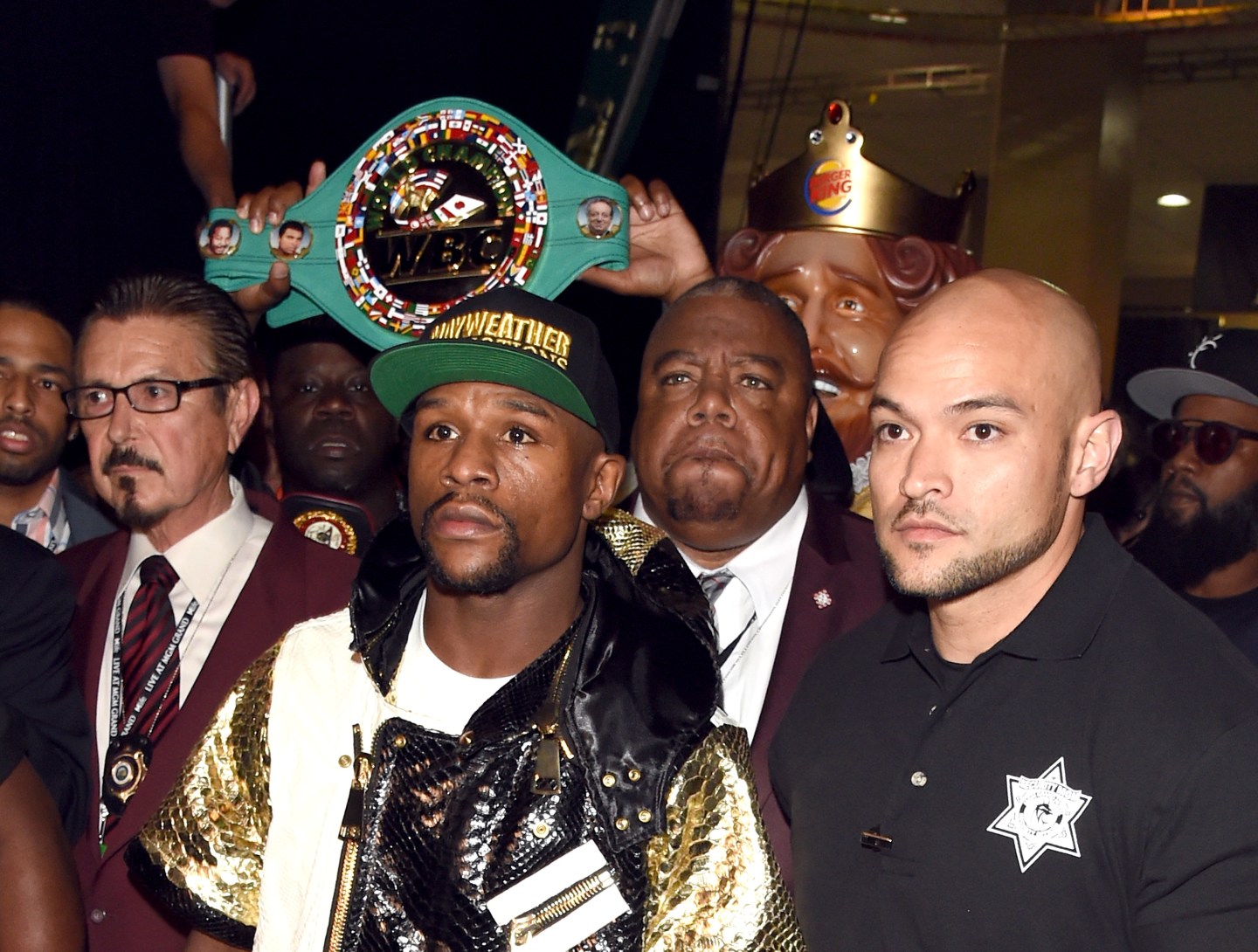 Floyd Mayweather, the world’s top boxer and the highest-paid athlete on the planet, is all about the show.

His fight entrances over the years have reflected as much. For his 2006 bout against Carlos Baldomir, Mayweather entered as a gladiator on a throne. In 2007, for his fight against Mexican-American fighter Oscar De La Hoya, he walked in wearing a sombrero. “Is he trying to win over the crowd, or just taunt the crowd?” asked an announcer at the time. That year, the rapper 50 Cent once walked in alongside Mayweather, rapping over the speakers. His entourage for the 2014 fight against Marcos Maidana changed to Lil Wayne and Justin Bieber. (Mayweather and Bieber are close friends and co-invested in a selfie app.)

On Saturday, Mayweather went with Bieber again—but this time, he had a corporate companion as well: Burger King’s official mascot. The “Burger King” stood behind Mayweather, clad in its trademark crown and robe, and shuffled toward the ring.

Mayweather would go on to win the fight by unanimous decision, bringing his official record to 48-0. But the boxer has not had as perfect a record in the public relations department. He has been twice convicted of domestic abuse (and spent time in jail). Leading up to this marquee event, the criticism and backlash over that history came out like never before, in part due to the fever pitch of social media. Sports and mainstream media delved so extensively into Mayweather’s past that, by the time of the fight, there were movements to boycott the event. Sports Illustrated called Mayweather “the most hated athlete in professional sports.”

So it’s worth asking: Why would a Fortune 1000 company choose to “get in the ring,” so to speak, with such a lightning rod of controversy? It’s difficult to conclude that associating itself with the embattled boxer would be advantageous for Burger King’s brand. Fans at the MGM Grand booed Mayweather as he came into the ring, booed during the fight, and booed especially loudly when the cameras showed Justin Bieber in his corner. By association, they booed the Burger King, too.

Brands have, for the most part, stayed away from Mayweather over the years precisely because of his public image. He has three times in a row topped the Fortunate 50, our Sports Illustrated/Fortune athlete earnings list—all with zero outside endorsement deals.

So why did Burger King hop on board this year? The company would only say this: “We don’t call him the King for nothing.”

That “official statement” refers to the Burger King, by the way, not to Mayweather. Asked to elaborate, and pressed on the company’s choice to stand behind Mayweather, the spokesperson replied: “We do not have anything else to contribute at this time.”

To be sure, Burger King isn’t the only big name that associated with Mayweather this year. Warren Buffett, last January, met up with the fighter in Las Vegas and shot a comedic video in which Buffett “fights” the champ. The video was shown at this year’s annual Berkshire Hathaway shareholder meeting in Omaha. Last year, Buffett partnered with Brazilian investment firm 3G Capital to help finance Burger King’s takeover of Tim Hortons.