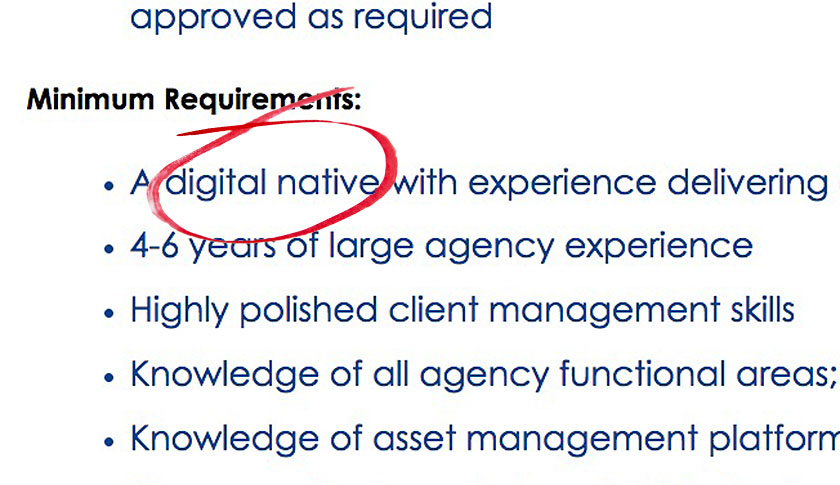 “Young people are just smarter,” Mark Zuckerberg, Facebook’s chief executive, famously said on a conference stage in 2007 when he was 22. In 2013, Facebook settled a lawsuit with California’s Fair Employment and Housing Department for posting an employment ad that stated “Class of 2007 or 2008 preferred.”

Apple, Yahoo, Dropbox, and video game maker Electronic Arts all have listed openings with “new grad” as a preference.

Lately, though, that language has fallen out of favor, and a curious, new phrase has taken root. Employers, especially in the media, advertising and tech industries, have begun advertising for “digital natives.”

Fortune did a simple search in Indeed.com and found dozens of listings, including from both established media giants and startups of all sizes, in which being a “digital native” is listed as a requirement.

The question is, what does the term mean? Three employment attorneys contacted by Fortune said the trend was troubling and argued it was a veiled form of age discrimination.

“The term ‘digital natives’ makes me cringe,” said Ingrid Fredeen, an attorney and vice president of NAVEX Global, which provides ethics and compliance programs to large organizations. “This is a very risky area because we’re using the term that has connotations associated with it that are very age-based. It’s kind of a loaded term.” Posting a job ad calling for “digital natives,” she added, is “really challenging and problematic” because it implies that “only young applicants need to apply.”

Author Marc Prensky has been credited with having coined the term “digital native” in a 2001 essay; he defined a digital native as someone born during or after the start of the digital world, meaning they grew up immersed in technologies and are “native speakers” of the digital language of computers and the Internet. In contrast, Prensky noted, the older “digital immigrants learn — like all immigrants, some better than others — to adapt to their environment” but they always retain their “‘accent,’ that is their foot in the past.”

Since the 1990s dotcom boom, many employers have openly sought to hire young, tech savvy talent, believing that was necessary to succeed in the new digital economy. At the same time, age discrimination complaints have spiraled upward, according to the Equal Employment Opportunity Commission (EEOC), with 15,785 claims filed in 1997 compared to 20,588 filed in 2014. Out of the 121 charges filed last year by the EEOC for alleged discriminatory advertising, 111 of them claimed the job postings discriminated against older applicants.

The EEOC has said that using phrases like “college student,” “recent college graduate,” or “young blood” violate the Age Discrimination in Employment Act of 1966 (ADEA). That federal law protects individuals who are 40 years of age or older from employment discrimination based on age.

Is using a generational term like “digital native” just another way of excluding over-40 job candidates?

According to Joseph Olivares, a spokesperson for the EEOC, the agency has not taken a position on whether using the term “digital native” in an ad is discriminatory. But that’s only because job seekers need to file a complaint first before the EEOC can investigate. So far, none have been filed.

All You and InStyle, which, like Fortune, are owned by Time Inc., each ran ads that used the term “digital native;” the ads were posted about six months ago. “If you found an ad, it was probably posted by a hiring manager who didn’t see it as a problem and didn’t bother getting it clear,” Greg Giangrande, Time Inc.’s Executive Vice President and Chief Human Resources Officer, said in a statement. “It’s not a phrase that we use in our advertising.” (He also said that in media circles, the term is generally used as “short-hand” for people who have up-to-date digital skills and experience.)

Fortune reached out to all of the employers mentioned in this article. Only one responded to requests for comment. StratusLIVE apparently took down the ad shortly after Fortune requested comment; the ad no longer exists on the web. [Update May 4, 9 am: Zipcar also apparently has taken its ad down.]

Inbound Marketing Agents’ co-founder Pat Owings told Fortune that Inbound has been using the term “digital native” on its job ads since last year. Owings, whose job responsibilities include human resources, according to the company’s website, said that when he first saw the term in one of their ads, he expressed concerns to his co-founder and CEO Bill Faeth, but the ad was published anyway. “This sort of recklessness from the CEO,” he said, is exactly the reason why he is currently separating from the company.

Owings added: “[Bill] has tried to create an organization that’s very Google-esque with the free beer and the free snacks and cool looking office space … that tends to attract a younger crowd. But obviously if he was called into court and put on the stand, he would say he was using [digital native] in a much more broad term, that he just wanted [applicants] to be technologically-savvy. That being said, he’s very focused on hiring a millennial workforce.”

According to Owings, there’s only one other employee — aside from himself and Faeth — over the age of 30. There are currently seven employees and five contractors working at Inbound.

Bill Faeth has a different story, describing Owings as “disgruntled because he is no longer part of the company.” He said he never received any warnings from Owings about using the term “digital native” on job ads. In fact, Faeth said he wasn’t aware that the term could be associated with age or a generation.

“I think it’s a pretty common term that’s being utilized in our industry,” he said, adding he didn’t think the term had a correlation with age so much as digital experience.

“I’m 42 years old and I had my first Apple when I was eight years old, so I would classify myself as a digital native just because I’ve used digital specifically for the majority of my adult life,” he said. He also said he “probably, possibly” won’t use the term in more ads “if there is potential for any kind of age discrimination.”

The employment attorneys contacted by Fortune all argued that using the term leaves employers open to charges of age discrimination. Christy Holstege, a civil rights attorney and feminist activist in Palm Springs, California, said, “I don’t believe using ‘digital native,’ a generational term, as a job requirement would stand up in court. I think older individuals could definitely argue ‘digital native’ requirements are just a pretext for age discrimination. And since this employment practice uses age as a limiting criterion, the defense that the practice is justified by a reasonable factor other than age is unavailable.”

Still, Holstege acknowledged proving age discrimination in a courtroom would be difficult. Holstege said that while she doesn’t think it’s “smart to put [digital native] in a job posting,” she can see employers arguing in court that the term “carries unique meaning as to certain skills or qualifications” and is “necessary to the normal operation of the particular business.”

If the job posting is the only piece of evidence the plaintiff has, they’re “probably going to be out of luck,” said Anne Golden, a partner at prominent employment law firm Outten & Golden. But if, for example, the plaintiff is, say, 55, and the hiring manager is 39 years old and has only hired people in their 20s and 30s and only fired people who are older, then you’re starting to build a case that would be admissible in court, explained Golden.

The current lack of seriousness placed on using the term “digital native” in job ads, though, could very well be because people are ignorant of its definition, explained Fredeen. Employers may be using the term loosely to mean someone who is “really comfortable with technology and social media platforms.”

In fact, Panasonic’s ad for a marketing group manager calls for a “digital native,” even while requiring that candidates have a minimum of 10 years professional “hands-on experience,” five years management experience, five years digital experience and preferably a MBA. How many candidates under the age of 35 would have all that experience? Panasonic didn’t respond to a request for comment.

“Maybe there is a cautionary tale to tell,” Fredeen said, predicting this “kind of language” in job ads will come under “great scrutiny in the very near future.”

In the meantime, the man who coined the phrase has backed off using the term altogether and instead evangelizes for what he calls “digital wisdom.”

On his web site, Prensky explains:

“Immigrants have to watch out for thinking the way they learned to do things is still the best way. Natives need to realize that they still have to learn many things about technology — and life. That is why it is important that we all learn to work together, with mutual respect, to find Digital Wisdom.”

Vivian Giang is a freelance writer covering gender conversations, leadership, entrepreneurship, workplace psychology, and whatever else she finds interesting related to work and play. You can find her on Twitter at @vivian_giang.