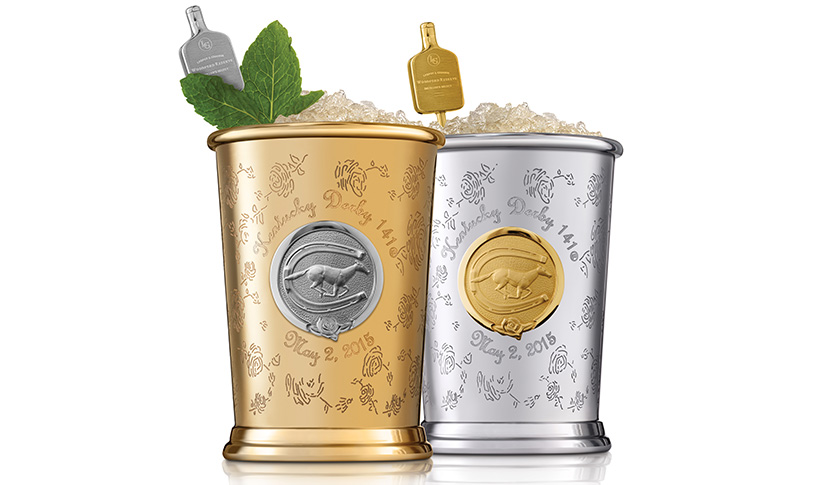 Kentucky Derby fans will be able to splurge on $1,000 mint juleps at the races on Saturday. That’s $45 for each sip — if they drink the bourbon cocktail according to the instructions outlined by whiskey expert Chris Morris.

A Louisville, KY. native, Morris is one of the nation’s top authorities on the American-made spirit. His parents worked for Brown-Forman Brown-Forman (BFB), the company that makes Jack Daniel’s, Woodford Reserve and Old Forester whiskies. Surrounded by bourbon his entire life, Morris is now Woodford Reserve’s master distiller, meaning he is responsible for maintaining the quality and consistency of the aged spirit. And according to Morris, there’s a formula to how to drink a mint julep.

First, he recommends using a straw rather than sipping from a cup or glass. Straws help mix the drink’s sugar and mint.

“Every time you sip, you are actually mixing the drink fresh,” Morris says. “And I have practiced, believe me. You should have at least 22 sips before your julep runs dry.”

At that speed, a julep should last about an hour, which is the typical amount of time between races at Churchill Downs in Louisville. Mint juleps are, of course, synonymous with the Kentucky Derby, the historic thoroughbred race and annual kick-off to the Triple Crown series.

Churchill Downs sells nearly 120,000 mint juleps during the weekend. This year, most of those juleps will be made with Brown-Forman’s Old Forester, priced at $11 each.

But patrons will also be able to pay $1,000 for one of 100 metal cups made with Woodford Reserve, to benefit the Wounded Warrior Equestrian Program. Brown-Forman is selling two expensive versions of the cups this year: a pewter version costs an extra $1,000 while a sterling silver and gold-plated cup goes for $2,500.

The high priced cocktails have sold out almost every year Brown-Forman has sold them at the Derby. It goes with the race’s fancy image, which includes a public decked out in big hats along with suits and dresses adorned in key lime, ocean blue and bright pinks.

Here’s what you would need to make the drink: two ounces of Woodford Reserve bourbon, one ounce of water, one teaspoon of sugar and four sprigs of fresh mint. Directions on how to make this classic cocktail, if you are looking to mix up the drink at home this weekend, can be found here.

Though the julep has strong roots with the South dating back to the 1800s, it wasn’t the “official” drink of the Kentucky Derby until 1938. Along with the Manhattan and the old fashioned, experts say the mint julep is one of America’s most recognizable cocktails. It can also be a challenging drink to master.

“The big bugaboo about mint juleps is if you don’t like the way it was made, it can put you off,” Morris says. He advises mixologists to ask customers a few questions to get the drink just right for their tastes. How sweet do they want it and how much mint would they like?

Morris changes the recipe for the $1,000 version each year. This time around, he’ll use a chocolate mint. In the past, it was lemon mint or peppermint. He’s also mixed tried different sugars over the years.

Morris and his team spent nine months thinking about what the classic julep will belike for this year’s Kentucky Derby. They set out to customize the drink without straying too far from what the mint julep should taste like. Morris, who has been a master distiller for 11 years, says it can be a fun part of his job.

“You gotta go through a lot of juleps to get it just right,” he said.