Even with fans shut out, Baltimore Orioles don’t stand to lose too much money 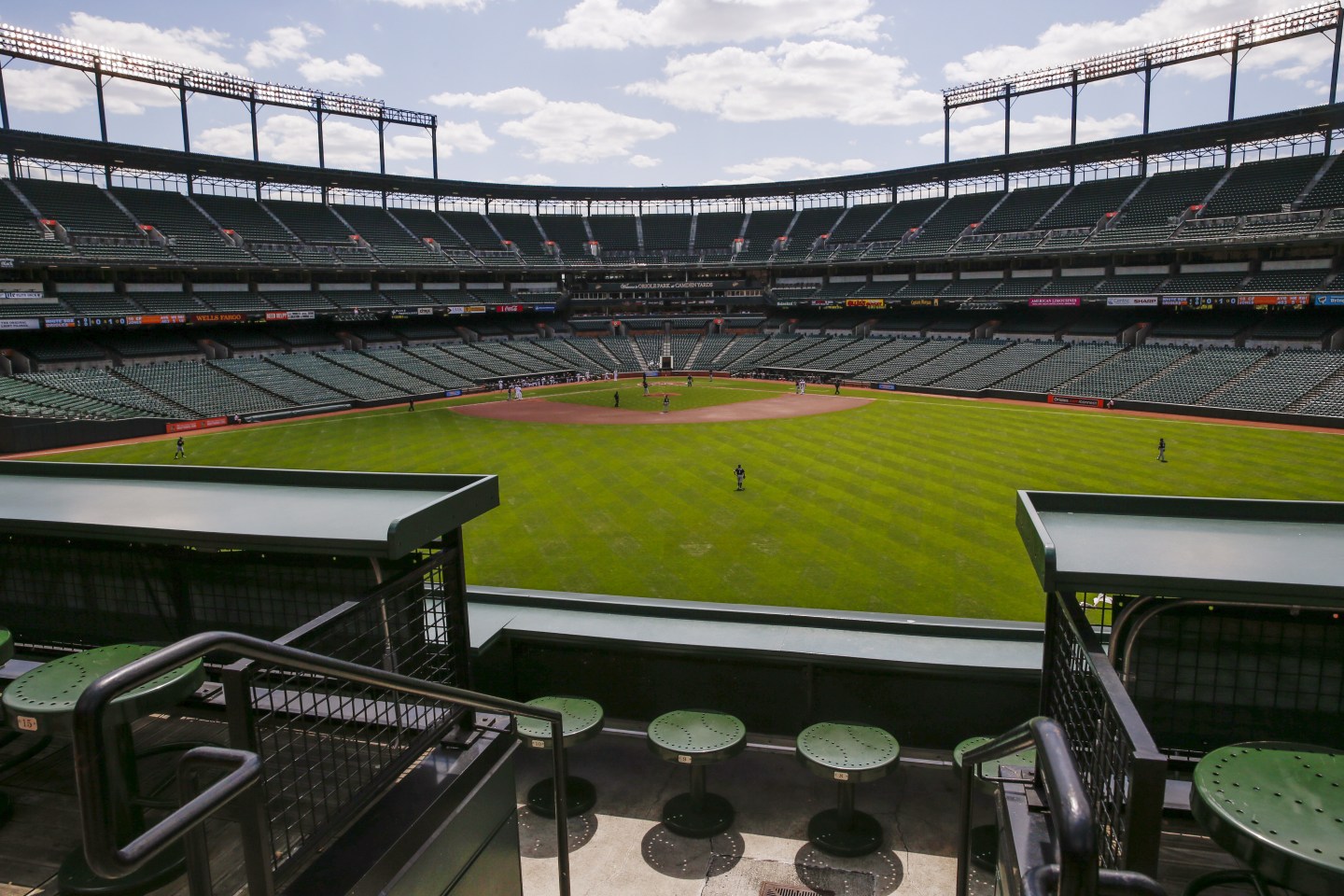 Camden Yards ballpark sits empty of fans during the Baltimore Orioles against Chicago White Sox American League baseball game in Baltimore, Maryland April 29, 2015. In what will be a first for Major League Baseball, the Baltimore Orioles will host the Chicago White Sox on Wednesday in a stadium closed to fans as Baltimore copes with some of the worst U.S. urban rioting in years.REUTERS/Shannon Stapleton - RTX1AVQV
Photograph by Shannon Stapleton — Reuters

The Baltimore Orioles made history Wednesday by hosting the first-ever Major League Baseball game with an official attendance of zero.

The Orioles’ beat the Chicago White Sox in a stadium with more than 45,000 empty seats after widespread violence and looting hit parts of the city Monday. Maryland’s governor declared a state of emergency and called in the National Guard.

As a result of the unrest, the Orioles stand to lose nearly $1 million in food, parking and ticket sales. But the amount is relatively small compared to the money the team brings in over the entire season.

The Orioles postponed two games meant to be played Monday and Tuesday. Today’s game, however, went on as planned, albeit closed to the public for safety. Though the situation in Baltimore seemed to have calmed down considerably, the team has also switched its upcoming three-game home series against the Tampa Bay Rays this weekend to Tampa.

The Orioles, therefore, will lose out on a total of four games’ worth of concessions, as well as parking fees. The team could also lose out on some last-minute ticket sales. But the Orioles aren’t actually refunding fans who have already bought tickets to the four games. Instead, fans will be able to exchange their tickets for seats at other home games later in the season.

From concessions and parking alone, the Orioles could end up losing almost $940,000 in total over the four games. The team is averaging 33,288 fans per game this season and the average fan at Camden Yards spent $5.94 per game on concessions in 2013, which comes out to less than $200,000 per game. As for parking, Camden Yards has about 4,200 parking spaces on-site, according to the Maryland Stadium Authority. Parking passes cost between $8 and $10 for each game, which adds up to about $37,800 per game.

Of course, the team could also offset that lost revenue, in part, by forgoing pay to stadium staff for those four games. But, really, forfeiting just under $1 million over four games is not a huge loss for a team that Forbes values at around $1 billion with roughly $245 million in annual revenue last year. Those numbers place the Orioles in the middle of the pack compared with the rest of the MLB.

A large part of MLB teams’ revenues comes from their lucrative television deals and, despite the lack of fans at the stadium, Wednesday’s game was still broadcast on MASN, the cable network majority-owned by the Orioles. MASN’s annual revenue isn’t typically publicly disclosed. But a recent court fight with the Washington Nationals — which owns the minority stake in the network — revealed that MASN took in $163 million in revenue in 2012. The bulk of that went to Baltimore on top of the additional $29 million the team gets every year for local television rights.

If you want a few more reference points, consider that the average MLB player makes $4.25 million in a season, which works out to just over $26,000 per game. And, with an estimated team payroll of $115.9 million this season, Baltimore pays out roughly $715,345 per game to the players on its 25-person roster. All-Star center-fielder Adam Jones takes home the bulk of that cash with more than $80,000 per game (before taxes).

In other words, losing less than $1 million dollars through this weekend is not likely to hurt the team’s finances too badly.

And, to be fair, Wednesday’s game was not completely empty. In addition to the players and coaches, some staff members and media were on hand on Wednesday (and a small group of dedicated fans posted up just outside the stadium gates). But the two teams squared off more or less in solitude, although the somewhat eerie scene of an empty Camden Yards did make a splash on social media.