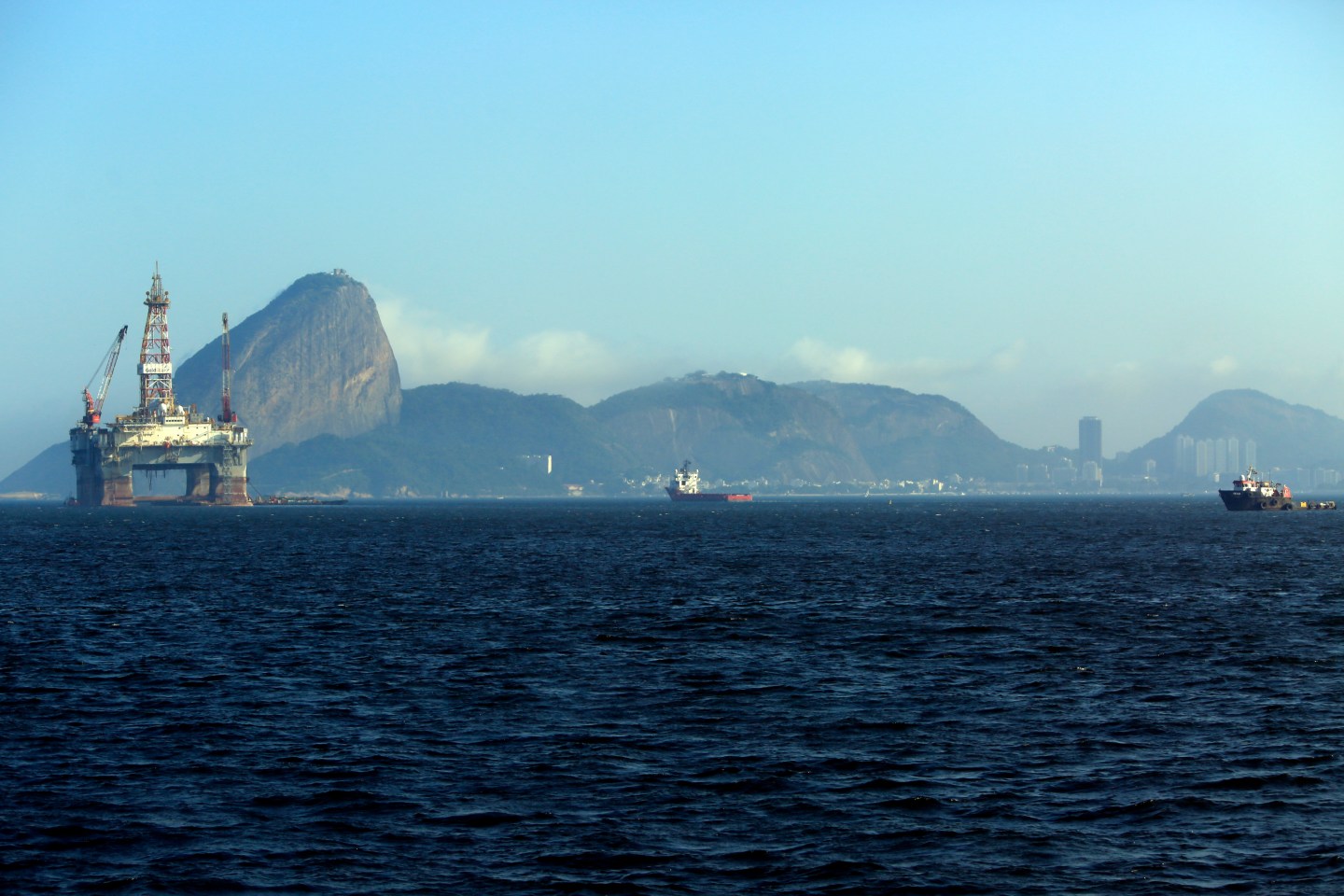 An oil drilling platform floats in Guanabara Bay near Niteroi, Brazil, on Monday, April 20, 2015. Petroleo Brasileiro SA (Petrobras), the state-controlled oil producer at the center of an ever-widening corruption investigation, plans to release its audited third-quarter and 2014 results after markets close on April 22, 2015, ending a five-month wait for investors. Photographer: Dado Galdieri/Bloomberg via Getty Images
Photograph by Dado Galdieri — Bloomberg via Getty Images

Brazilian state-run oil company Petrobras SA (PBR) reported its biggest-ever loss on Wednesday, the result of a 50.8-billion-real ($16.8 billion) write-down in the wake of a massive corruption scandal.

Of the write-downs, 6.19 billion real, or about 12% of the total, were directly related to the corruption probe, Petrobras said. The rest was “impairment” resulting from poor planning, declining oil prices, unrealized refinery project goals and excess costs such as over-priced goods purchased under tough national content rules–many of which its critics would also ascribe to corruption.

“From here on in, Petrobras guarantees a return to normality in its relationship with investors, shareholders and creditors in Brazil and abroad,” Bendine, who took over as CEO in early February, said at a press conference announcing the delayed financial results.

“We are cleaning up the errors in the treatment of company resources so that we can deal with the market with the transparency that it demands and deserves.”

The write-down is one of Petrobras’ first concrete steps to restore access to capital markets since the scandal forced the delay of audited financial statements in November. The company’s financial difficulties have led to debt downgrades by major ratings agencies.

Petrobras has already said it will be forced to cut investment aimed at developing offshore oil discoveries that are the among the world’s largest in four decades. Those discoveries had led investors to drive the company’s market value up to nearly $300 billion in 2008 and helped sell $70 billion of new stock in 2010. Petrobras is worth only $56 billion today.

While the write-down helps shine a light on one of the company’s darkest moments, challenges remain for the company and Brazil as whole.

In addition to harming Petrobras, Brazil’s biggest company, the scandal has hamstrung two dozen of Brazil’s largest construction and engineering firms, bankrupting at least five, and throwing thousands out of work.

It also is the biggest setback yet to a $44.2-billion-a-year Petrobras expansion plan that President Dilma Rousseff and her Workers’ Party (PT) have used to justify firmer state control of natural resources and increased intervention in the economy.

Petrobras, whose annual investment is frequently double the government’s discretionary infrastructure budget, said on Wednesday that it would cut 2015 capital spending to $29 billion, 34% below the planned average for each of the next five years. Bendine said it would cut spending by another 13% to $25 billion in 2016 and unveil a new strategic plan in 30 days.

Investors questioned the true value of Petrobras assets after a wave of arrests last year of top executives from the oil company and its contractors building billions of dollars worth of refineries, drilling ships and other complex oil and gas infrastructure.

As a result, auditor PricewaterhouseCoopers declined to certify company results.

The company reported a fourth-quarter net loss of 26.6 billion real. Earnings before interest, tax, depreciation and amortization – a measure of the company’s ability to generate cash from operations – were 20.1 billion real.

Petrobras had reported unaudited third-quarter results in January, but the delay in publishing audited accounts cut the company off from financial markets. Under contracts for more than $50 billion worth of global bonds, failure to publish audited fourth-quarter results could have resulted in default and forced early repayment of those debts. The risk of default was removed by Wednesday’s financial release.

“The audited results are likely to improve overall expectations and reduce the risk of further downgrade from credit rating agencies for the time being,” Joao Castro Neves, Latin America director for the Eurasia Group in Washington said in a note.

The write-down in the audited accounts is not hugely different from the 61.4 billion real net impairment proposed in January by then-CEO Maria das Graças Foster. Foster and five other senior executives resigned in February.

“A big write-down is a sign that policy makers are starting to realize that they may need to change some of their policies,” said Cleveland Jones a director of the Brazilian Petroleum Institute at Rio de Janeiro-State University. “This could open the door to a more open and dynamic oil industry.”

The release of the audited accounts on Wednesday followed extensive negotiations with PricewaterhouseCoopers and securities regulators in Brazil and the United States.

The company remains the world’s most-indebted and least-profitable major oil company and faces an additional battle after a 50% decline in the price of oil in the last year.