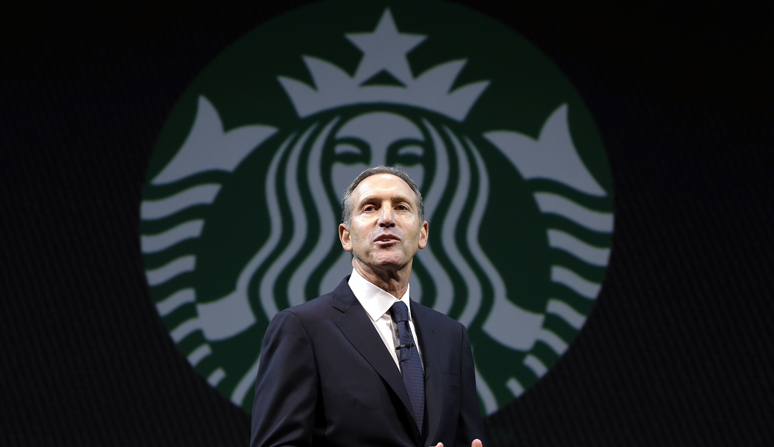 Starbucks baristas may not be writing “Race Together” on customers’ coffee cups anymore, but CEO Howard Schultz certainly isn’t done talking about the nation’s touchiest topic.

On Tuesday, Schultz talked about his company’s efforts to address racial tension and announced that his coffee shop chain will open a location in Ferguson, Mo. as a “way to create employment.” Protestors clashed with police officers in the St. Louis suburb this summer, after the shooting death of 18-year-old Michael Brown, an unarmed black man, by a white cop.

Starbucks has locations in nearby Jennings and Florissant, Mo., and six stores in Lambert-St. Louis International Airport, but none in Ferguson.

Schultz tucked the Ferguson store news into comments he made on stage at an event hosted by NationSwell, a digital media company focused on American innovation and renewal. Schultz’s appearance at the event focused on his company’s ongoing efforts to combat racism and inequality in the United States, its education benefits for workers, and its recent commitment to hire military veterans and so-called opportunity youths, generally described as unemployed 16 to 24-year olds who have not followed a traditional education path.

After his on-stage interview, Schultz told Fortune that there was no specific timeline for the opening of a Ferguson store, and he declined to provide more information about plans for the location there. A Starbucks spokesperson did not provide an opening date but said that the Ferguson store is “part of our plan to build more stores in urban neighborhoods.”

Whenever Starbucks ultimately open its store in Ferguson, a city that’s 70% black, the location will counter the heavy concentration of Starbucks locations in predominantly white neighborhoods. By crunching Census figures and a dataset of 11,500 Starbucks locations in the United States as of August 2014, Quartz determined that the density of Starbucks stores increases along with the whiteness of census tracts.

The Ferguson store announcement comes a month after the Seattle-based company launched “Race Together,” an initiative that encouraged Starbucks baristas to start conversations about race relations with customers by writing the words “Race Together” on coffee cups. The company developed the campaign after several months of conversations between Schultz and company employees about the racial tensions that erupted across the U.S. after grand juries declined to indict the white police officers implicated in the deaths of Brown and 43-year-old Eric Garner, a black man who died from a police officer’s chokehold in Staten Island, N.Y.

The initiative received immediate ridicule on Twitter and Facebook, as commenters in the media and members of the public questioned whether it was the best way to debate the hot-button issue and if it would slow down service at Starbucks’ restaurants. Less than a week after announcing the program, the company ended a key part of it, instructing baristas to stop writing “Race Together” on customers’ cups.

On Tuesday, Schultz emphasized his belief that race relations is not too sensitive an issue for his company to tackle. Schultz has never shied away from using his platform as CEO of a Fortune 500 company to speak out on controversial political and social subjects. In 2013, he led a petition-based push urging Washington politicians to end the federal government shutdown. That year, he also wrote an open letter asking gun owners to refrain from bringing their firearms into stores.

Fortune reported in August that residents of St. Louis area, which includes Ferguson, have not felt the economic recovery equally. The unemployment rate for African Americans in the county of St. Louis City was 26% in 2012, according to the Census Department’s latest available stats. For white Americans, the unemployment rate was 6.2%. Employment figures from the fall of 2014 show that in Missouri, black unemployment was 15.7%; for whites it was 4.5%.