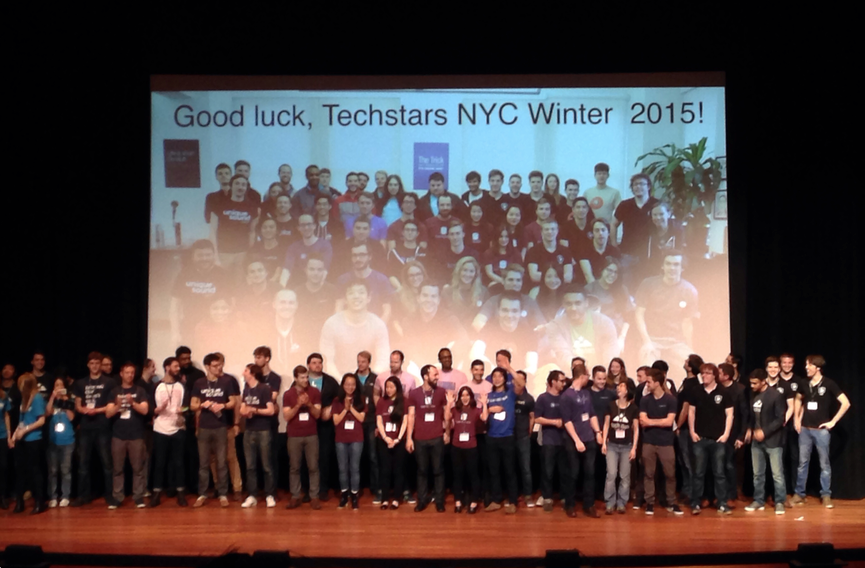 Demo days from startup accelerators tend to have a formula. One by one, the CEO of each “accelerated” startup runs onstage to thumping music—or in the case of one CEO at the Techstars NYC Demo Day on Friday, the theme song from The Lion King—to enthusiastically deliver a PowerPoint pitch to a dark theater packed with investors, press, and hangers-on.

At best, a startup demo day is a showcase of new and exciting startups. At worst, it’s a collage of meaningless big numbers, naive promises to change the world, and cheesy sales pitches. In any case, it is a performance, meant to keep energy high and investors intrigued.

The latest class from Techstars New York had much to offer. IrisVR outlined a way for industries from retail to construction can use virtual reality to save time and money. BentoBox showed off software that helps restaurants create functional, mobile-friendly websites. Unique Sound showed off a platform for brands and media companies to connect with musical composers. The CEO of Pilot showed off his company’s plan to bring faster Internet to businesses in urban areas with the phrase “Internet that doesn’t suck” emblazoned on his t-shirt.

The primary goal of an accelerator’s demo day is to generate venture capital investments for its graduating class of startups. Since the JOBS Act loosened the rules around general solicitation, sometimes the startups blatantly beg by ending their presentations with slides that say something like, “We’re raising $700,000 and we’ve already got commitments for half of it. If you want in on this opportunity, talk to us afterwards.”

But the secondary goal of the demo day is to promote the accelerators themselves—to continue to justify their existence. Accelerators have gone through a period of skepticism in recent years. The early success of Y Combinator, Silicon Valley’s most prominent accelerator program, spawned legions of copycat programs around the country with varying degrees of quality. But Y Combinator has failed to replicate its early successes with Dropbox and Airbnb. In 2012, it scaled back its program, noting that it had grown too fast.

Techstars has 18 programs in the U.S. and Europe. It has partnered with Fortune 500 companies like Disney (DIS), Nike (NKE) and Sprint (S), to run industry-specific accelerator programs. The Techstars New York program, which does not have a corporate partner or a specific theme, went through a rocky transition when its managing director was abruptly fired three weeks before demo day in 2013. Alex Iskold, who founded TV startup GetGlue, took over in 2013 and has stabilized the program, moving its headquarters to Midtown expanding it from one three-month program a year to two.

Partway through the demo day, Iskold took the stage to tout the successes of Techstars NYC. In 2014, Techstars NYC graduates raised $180 million in venture funding. The last class of Techstars startups in New York raised $20 million and created 100 jobs.

Brad Feld, a prominent venture investor who co-founded Foundry Group, took to the stage to note that Etsy’s successful IPO was a huge win for New York tech. He declared this Techstars class to be the most “technically deep” one he’s ever seen.

None of the demonstrations that morning included a blatant plea for money. It came, albeit more subtly, from Feld. The founding principle of Techstars was that “you can build a vibrant, active startup community in every city around the world,” he said. But that requires members of that community to “give first.”

“We’re asking for help and support from everybody here,” he said. That is necessary “to build an unbelievable place here that sustains itself, not just through the happy part of the cycle that we’re in now but through the inevitable downturn of the cycle.” If successful, he said, these companies will “change the way everything works for our species.”

And with that, the crowd flooded into the auditorium lobby, where the accelerator graduates stood beside tables with stickers and miniature cupcakes bearing their startup’s logos. Only investors, whose name tags were green, were invited to stay.