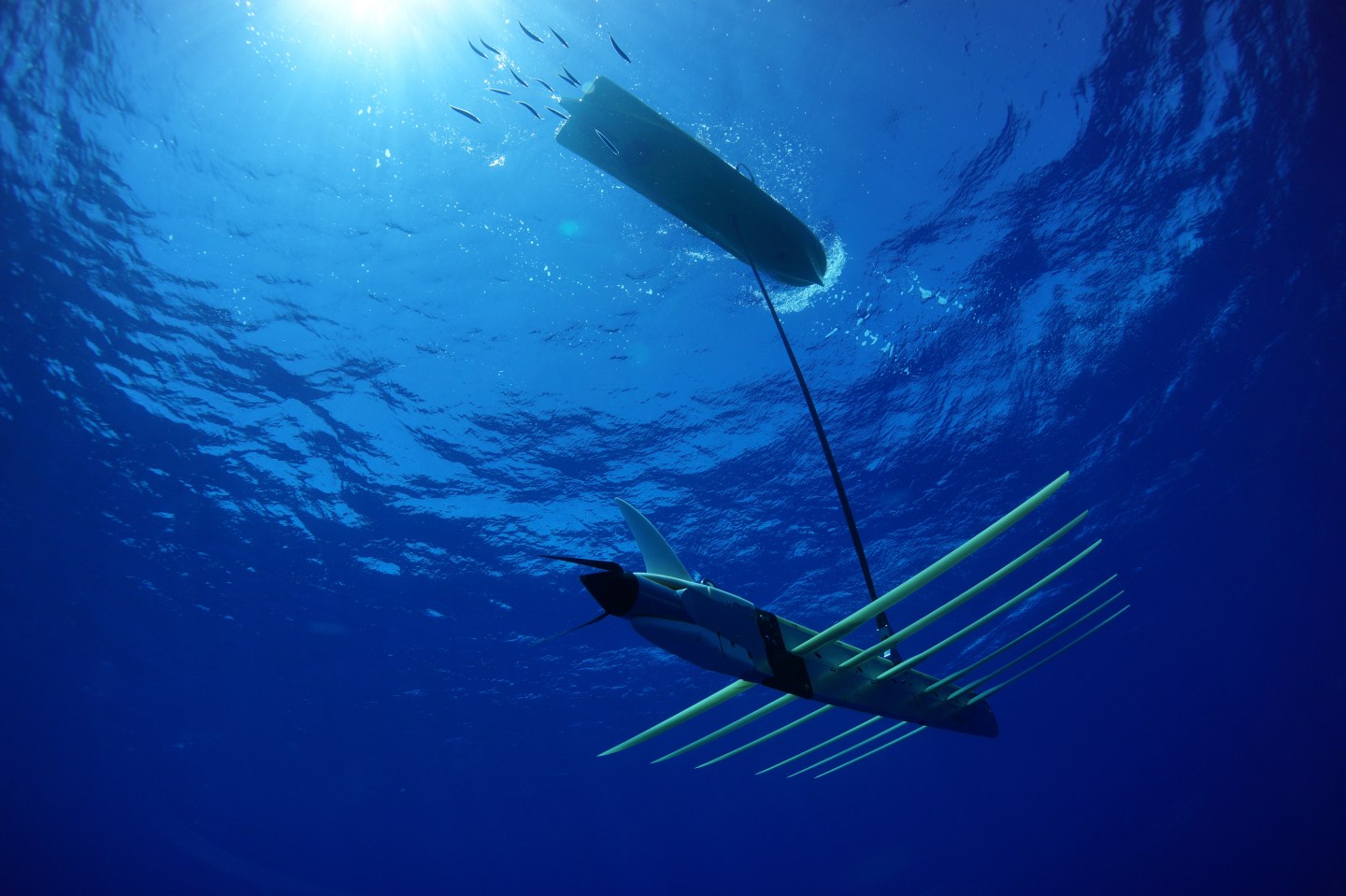 Speaking at the Navy’s Sea-Air-Space technology expo outside Washington D.C., Secretary of the Navy Ray Mabus announced that he’ll soon be making a slight adjustment to his office’s organizational chart. “I’m going to appoint a new deputy assistant secretary of the Navy for unmanned systems,” Sec. Mabus told reporters. Along with an assigned counterpart for chief of naval operations staff, the new office will “coordinate and champion” all aspects of unmanned technology, he said.

Talking to the myriad of defense contractors exhibiting at the show, one could be forgiven for thinking Mabus was late to the party. Although unmanned aerial vehicles—drones that dispense intelligence and occasional Hellfire missile from skies around the globe—typically dominate conversations about unmanned systems, the defense industry is seeing increased demand and growing opportunities for those that operate on and below the ocean’s surface.

“Interest is growing,” says Bill Irby, senior vice president and general manager of unmanned systems at Textron. “They’re seeing the value in the dirty, nasty stuff (such as) minesweeping, things like that.”

Textron is one of several major defense contractors pushing unmanned maritime systems at what is now the largest maritime technology expo in the U.S. The company’s Common Unmanned Surface Vessel, a robotic multi-mission surface ship, is designed to deploy from the navy’s Littoral Combat ship. It is currently in trials with a Navy technology office that’s keen to leverage robotic technologies on—and underneath—the vast and largely unmonitored ocean.

The U.S. Navy is now investing roughly 22 percent of its science and technology dollars on the undersea domain, said Rear Adm. Matt Winters, chief of the Office of Naval Research. Later this year, the service will deploy undersea drones from a Virginia-class attack sub for the first time. Applications for these subsea systems could include antisubmarine warfare, situational awareness, enhanced communication and mine detection.

Whatever the use, the force’s growing interest in this new breed of maritime technology spells new opportunities for defense contractors and technology startups alike. Huntington Ingalls Industries, the shipbuilder better known for producing aircraft carriers and nuclear powered submarines, is pushing a new optionally manned/unmanned submarine. It will be developed with help from Batelle, a non-profit research and development organization, and travel hundreds of miles on its own carrying a range of payloads (including special forces operators).

At the expo, defense giant Boeing(BA) and Califronia-based startup Liquid Robotics, displayed their SHARC, a wave- and solar-powered surface vessel that can deploy at sea for up to a year and can continuously monitor for surface vessels and/or submarines. It’s a new type of persistent monitoring technology that’s becoming more attractive, and not just to the U.S. Navy.

More than one contractor told Fortune that while demand from the service is growing, foreign navies—particularly those in Asia and the Persian Gulf—are really driving demand in the maritime robotics field. Textron is courting serious interest from more than one Gulf nation for its Common Unmanned Surface Vessel, Irby says. Likewise, Liquid Robotics CEO Gary Gysin has seen interest from the Royal Australian Navy and the navies of Malaysia and Japan.

Given the Pentagon’s ongoing “pivot to Asia,” it’s perhaps no coincidence that the U.S. Navy and its Western Pacific counterparts are looking for similar solutions to similar problems, which include everything from protecting fisheries to curtailing drug and human trafficking and monitoring territorial waters in a region where boundary disputes are common.

Unmanned technology offers the kind of persistent maritime surveillance that these navies increasingly need and creating a host of new near-term opportunities for American defense contractors with experience in the maritime arena. “We’re seeing some navies that are willing to move quite fast, and take some risks,” says Liquid Robotics’ Gysin.