Navdy, on the road to putting sci-fi screens in cars, raises $20 million 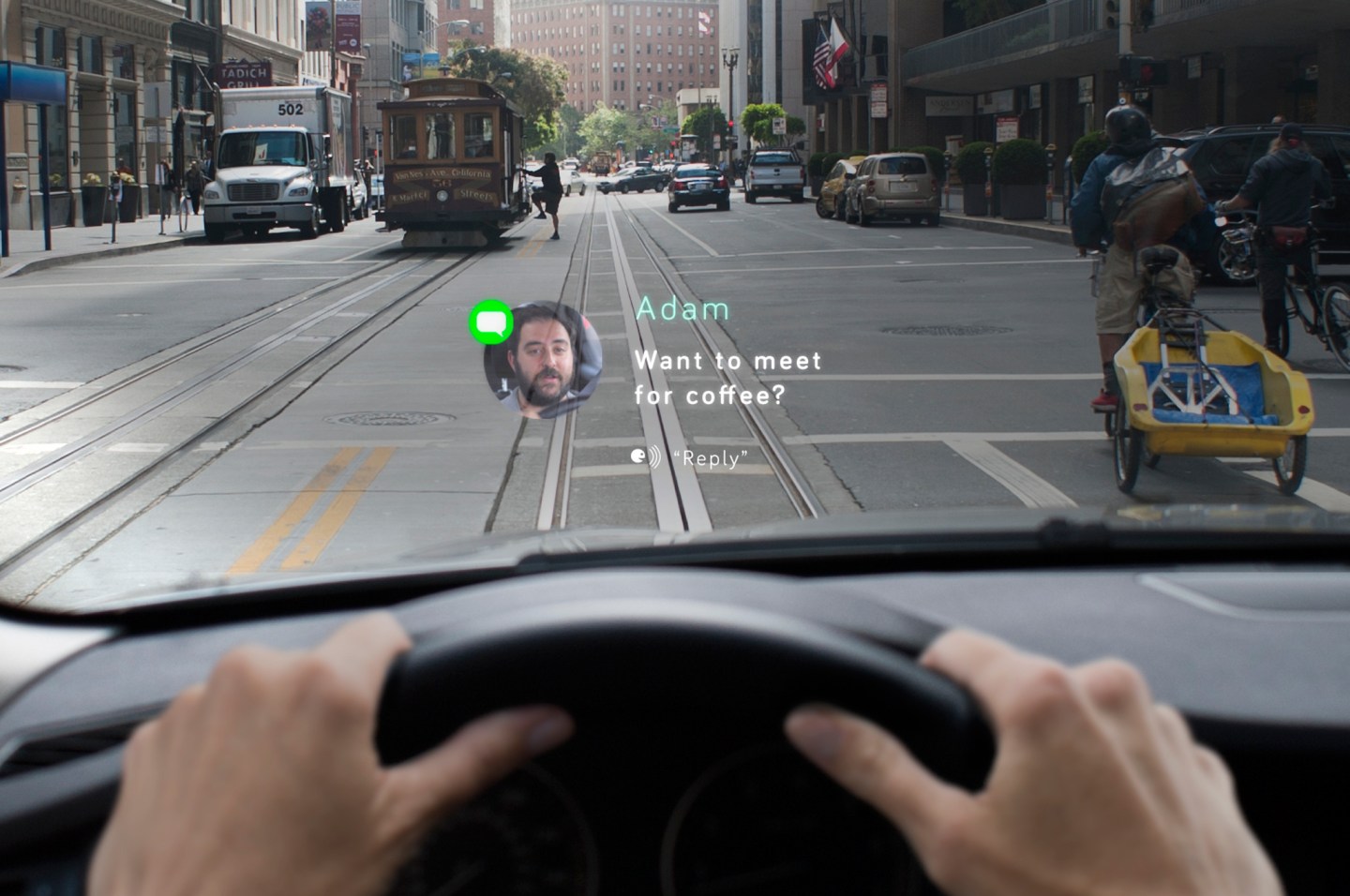 Self-driving cars for the public may be a reality someday, but until then, human drivers must avoid being distracted by their smartphones and keep their eyes on the road.

Navdy, a San Francisco-based startup, is building a digital head-up display for cars that it says will make driving and smartphone use safer. On Thursday, it announced that it had raised $20.3 million in new funding that it will use to continue growing its team and ramp up manufacturing.

Navdy’s technology would let drivers handle tasks like sending text messages, making phone calls and getting driving directions without having to take their eyes off the road. Distracted driving is, of course, a big problem that is responsible for countless accidents.

The actual product is a small projector mounted in front of a reflective glass panel that sits atop car dashboards. The system wirelessly connects to both smartphones and the car’s computer and projects information on the transparent screen. Drivers barely notice the display unless it is turned on. Even then, all they have to do is to glance down a little bit rather than checking a phone in their hand.

To begin with, Navdy is focusing on ways for drivers to communicate like sending and receiving text messages and making phone calls along with playing music and getting driving directions from Google Maps. The idea is to let drivers to interact with smartphone notifications and apps on the display by using hand gestures.

Customers have pre-ordered more than 17,000 units, worth $6 million, since Navdy started accepting them in August. Originally, the company planned to start shipping its new displays in the summer, but it has since pushed that back into sometime later in the year.

“We didn’t expect the number of pre-orders we got, so that’s forced us to change our supply chain strategy,” co-founder and CEO Doug Simpson told Fortune.

The unexpected high pre-order volume and investor interest prompted Navdy to raise more funding than the $15 million it had originally anticipated. It also accelerated the time frame for raising it, with the latest round coming just eight months after a previous infusion of funding.

Navdy’s push comes at an interesting time given all the recent buzz around self-driving cars. Google and a few car makers have already unveiled prototypes, while companies like Cruise work on self-driving systems that car owners will be able to install into their existing cars.

But Simpson isn’t really worried about the competition. After all, full self-driving technology several years away from public availability. Furthermore, he expects that it would take nearly two decades for car owners to replace every conventional vehicle on the road with a sci-fi version.

Eventually, instead of using a small clear piece of plastic to display information, Navdy’s technology could use the car’s entire windshield, he said. He said the technology could also become a tool for passengers traveling in self-driving cars.

In fact, Dietz, whose firm led the latest Navdy funding round, believes that getting the software and user experience right should be Navdy’s real worry. The company will have to figure out what the initial features like maps and text messages will look like, how to find balance between convenience and safety, and how much drivers should be able to customize what they see in their displays.

“Fortunately, it’s software so you can make changes,” Dietz said.

Simpson said Navdy has already improved the display’s hardware and software designs since the original version it showcased last summer. But it declined to release photos of its new designs.

Along with selling futuristic displays to individual car owners, Navdy could also partner with car makers, parts suppliers, insurance companies, retail distributors, rental car fleets, and on-demand ride services like Lyft and Uber. However, Simpson said that he’s holding off on such partnerships, and is instead focusing on delivering the company’s first product to customers.

Navdy also plans to eventually let third-party developers create apps and software for its display, something Dietz believe will only provide customers with more useful apps and ways to interact with their phones while driving.

Simpson and co-founded Navdy with Karl Guttag in 2012. The latest round of funding brings up the company’s total to $26.8 million. In addition to Upfront Ventures, Formation8, Qualcomm Ventures, Promus Ventures, Eniac Ventures, and Wareness.io also invested in Navdy’s round.