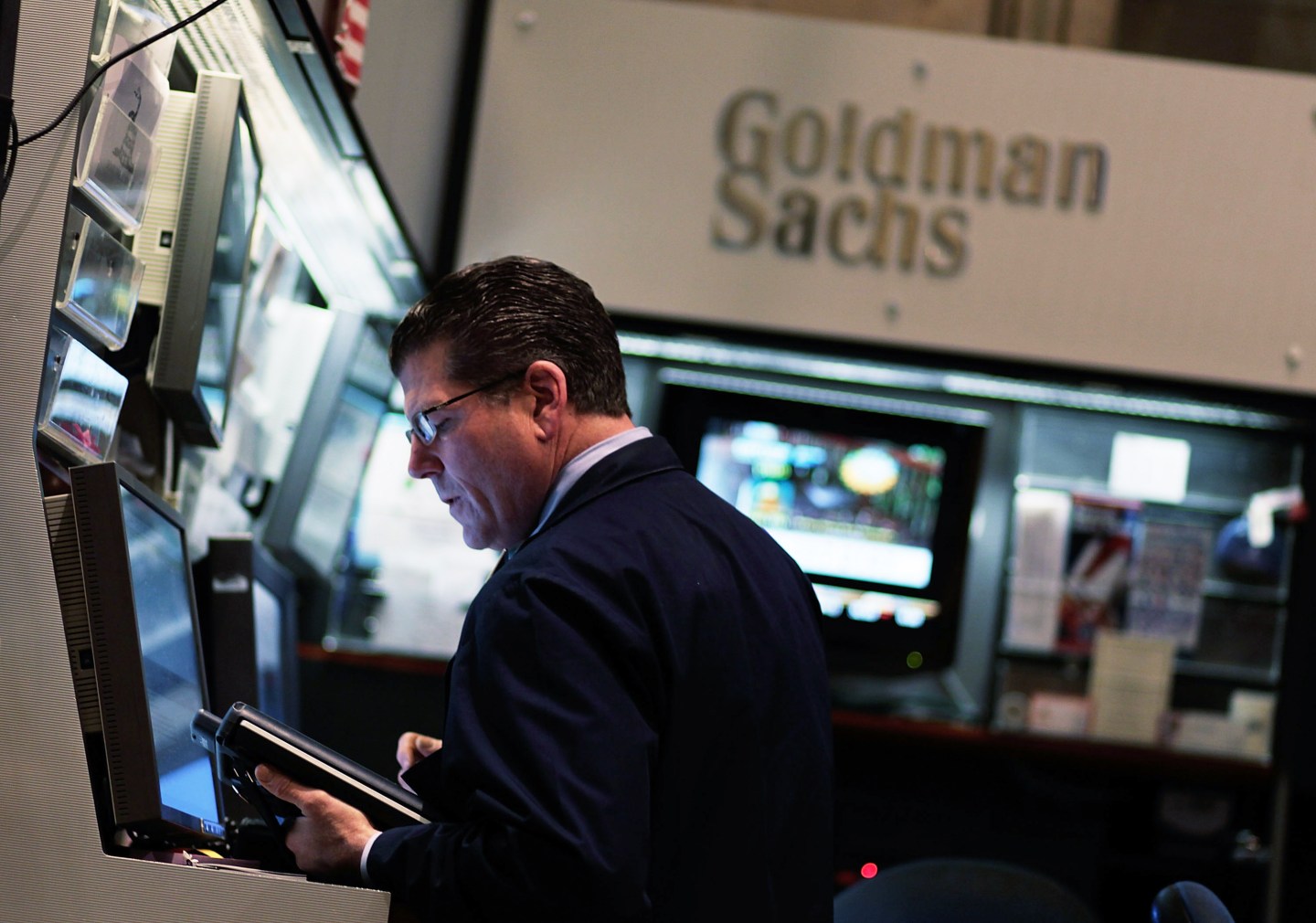 NEW YORK - APRIL 16: A financial professional works in the Goldman Sachs booth on the floor of the New York Stock Exchange April 16, 2010 in New York City. Goldman Sachs was charged with fraud by the Securities and Exchange Commission over its marketing of a subprime mortgage product, sending its stock price sharply lower. (Photo by Chris Hondros/Getty Images)
Photograph by Chris Hondros — Getty Images

Goldman Sachs (GS) reported its best quarterly profit in five years on Thursday, notching up big gains from trading bonds and currencies as global markets fluctuated during the first three months of the year.

Trading got a boost after the Swiss central bank scrapped a cap on the franc, the European Central Bank announced its quantitative easing program, and the U.S. Federal Reserve moved to tighten monetary policy.

That resulted in choppy trading that investment banks such as Goldman feed off. The bank’s total trading revenue rose 23 percent to $5.46 billion in the quarter ended March 31.

“Investors almost always discount trading and investment results because they’re so volatile,” said Michael Wong, an analyst with Morningstar, who also noted the lack of clarity on Goldman’s plans to return capital to shareholders.

“Retaining potentially excess capital, when it doesn’t seem to be for opportunistic purposes, makes someone wonder how much excess capital Goldman truly has or whether it’s retaining capital for a potential negative contingency,” Wong said.

Goldman has been more committed to trading fixed-income, currencies and commodities (FICC) than some rivals, which are abandoning the business in the face of new capital rules and a slump in client activity.

FICC revenue rose 10% to $3.13 billion in the first quarter, after falling 29% in the fourth quarter.

“Given more normalized markets and higher levels of client activity, we remain encouraged about the prospects for continued growth,” Chief Executive Lloyd Blankfein said in a statement.
[fortune-brightcove videoid=4175244339001]

The bank posted a bigger gain from trading in the quarter than JPMorgan Chase & Co. Bank of America Corp and Citigroup Inc reported declines. Morgan Stanley reports earnings on Monday.

Net income applicable to common shareholders rose 41% to $2.75 billion, or $5.94 per share, beating the average estimate of $4.26, according to Thomson Reuters I/B/E/S.

“Overall, GS posted very strong results which show the strength of (its) business model,” analysts at Keefe, Bruyette & Woods said in a note.

Compensation and benefit expenses rose 11.2% but were down slightly as a percentage of net revenue.