Why Bank of America’s $3.4 billion in earnings wasn’t that impressive 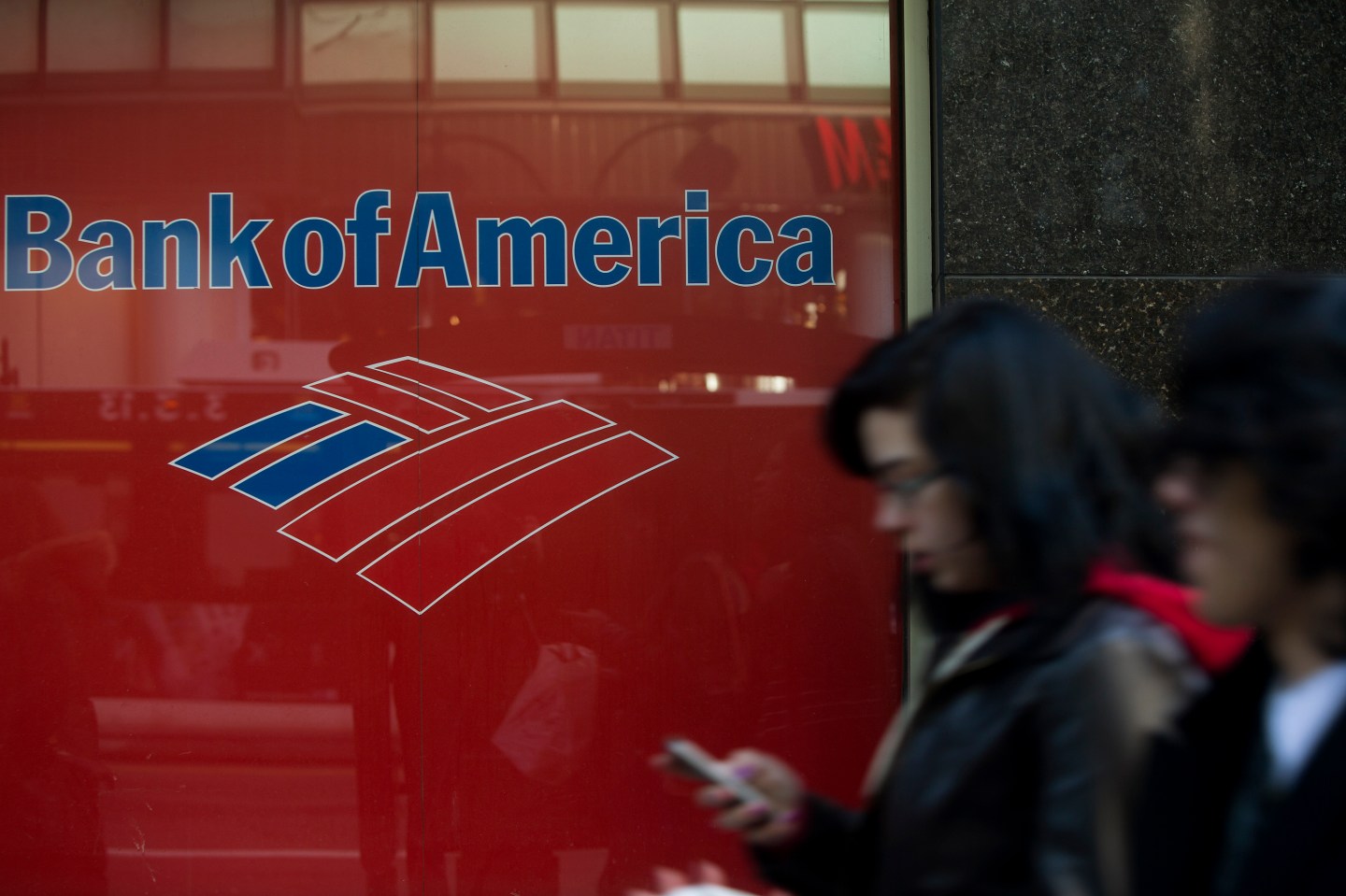 A woman checks a mobile device as she walks past a Bank of America Corp. branch in New York, U.S., on Tuesday, March 5, 2013. The six largest U.S. banks may return almost $41 billion to investors in the next 12 months, the most since 2007, as regulators conclude firms have amassed enough capital to withstand another economic shock. Photographer: Victor J. Blue/Bloomberg via Getty Images
Photograph by Victor J. Blue — Bloomberg via Getty Images

After years of souring loans, bad acquisitions, and fines, Bank of America finally had its chance to show Wall Street its stuff. What it had to show was meh.

On Wednesday, Bank of America said it earned $3.4 billion in the first quarter of 2015. That was up from a loss of $267 million during the same period a year ago. But that was before legal charges, which were $6 billion in the quarter a year ago. Strip those out, and BofA’s pre-tax earnings actually fell 17%. So despite the fact that the results were better than expected, shares of BofA (BAC) were down slightly for the day, closing at $15.64.

What you need to know: Bank of America CEO Brian Moynihan’s plan for a while has been to leverage different parts of his giant bank to grow business elsewhere. The bank branches are supposed to nab people for BofA’s Merrill Lynch brokerage business and also its mortgage business. The commercial lending side of the house is supposed to drive business for its investment bankers and traders. And all of that cross-selling is supposed to make the bank more efficient and profitable.

This quarter, that business model really didn’t work. Revenue in all of its major businesses dropped during the first quarter of 2015. Overall, sales were down nearly 6%.

“At a time of continued low interest rates, we had good expense control as we focus on responsible growth with a balanced platform,” Moynihan said in a statement.

The big number: BofA’s trading business offers a good example of how Moynihan’s cross-selling strategy didn’t work. Many analysts expected the quarter to be a good one for Wall Street trading desks. Rival JPMorgan Chase, which reported higher revenue and earnings in the first quarter on Tuesday, got a big bump from increased trading revenue.

But revenue from BofA’s trading business fell by just over $400 million in the quarter, down 7% from a year ago. Profits plunged 28%. Why? BofA said much of its trading is tied to new issues because it is a large underwriter of stock and bond offerings. But stock and bond offerings were down in the quarter, and so was its trading operations. JPMorgan is showing how being a big diversified bank can pay off. BofA just looks bloated.

What you may have missed: The other prong on Moynihan’s plan for improving BofA is cost cutting. That worked out a little better in the first quarter. Overall, expenses were down $6.5 billion from the first quarter of 2014. But, again, that includes legal expenses. Still, even after taking legal expenses out of the equation, expenses were down 6% compared to a year ago. BofA’s head count dropped by 18,902 employees over the past year, or nearly 7% of its workforce. Moynihan sited the headcount reduction as part of the bank’s efficiency efforts.

The problem is, given the fact that revenue is not rising at the bank, those cuts aren’t enough. BofA was one of the first big banks to talk about simplification. Now everyone is. The efficiency ratio (expenses/revenue—a lower percentage equals a more efficient operation) has become a big deal to investors looking at the big banks. But, after years of trying, BofA still isn’t all that efficient. Its efficiency ratio was 73% for the quarter. That compares to just under 60% for Wells Fargo. BofA has a lot more simplifying to do.