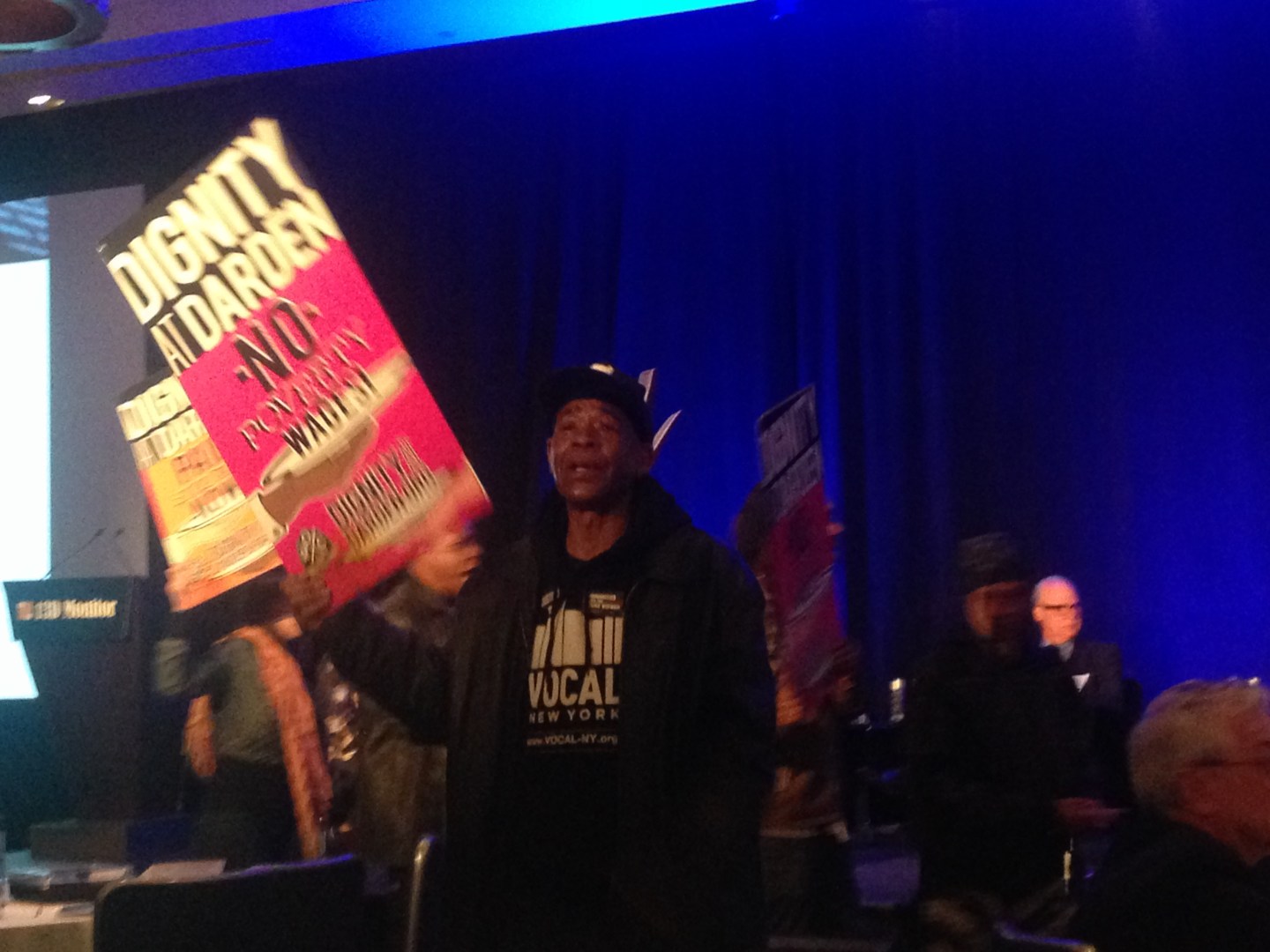 A conference of shareholder activists wasn’t prepared for its own activists.

On Monday, a gathering of hedge fund investors, who push for changes at companies, was temporarily shut down by activists of the more traditional variety. Some 20 protesters entered the main room of the Active-Passive Investor Summit, which was being held at the Crowne Plaza in midtown Manhattan, around mid-day and began chanting and marching back and forth in front of the stage. The conference organizers seemed unprepared for the protest, which lasted for about 20 minutes.

Conference panelists on stage at the time stayed in place, but, after a little while, they decided to bail, as did many in the room. After twice announcing that the police had been called, the protesters walked out on their own.

The activists appeared to be protesting low wages at Darden Restaurants, the company that owns Olive Garden and a number of other chains. Darden’s management was thrown out last year after losing a proxy fight with hedge fund manager Jeff Smith, whose Starboard Value is a major shareholder of Darden. The protesters carried signs that read, “Dignity at Darden. No poverty wages.” But they chanted, somewhat incongruously, “Show me 15, Bill Ackman,” referring to the group’s $15 an hour wage goal. Ackman, another hedge fund manager, does not own a stake in Darden. Later, members of the group started chanting Jeff Smith’s name.

(A spokesperson for Darden says “on average, our hourly employees earn nearly $15 per hour today.”)

One of the protesters said that his assembly was associated with the group Hedge Clippers, which recently held a large demonstration in front of the Greenwich, Conn. home of hedge fund manager Paul Tudor Jones II. The group also released a report last week on how “a handful of hedge fund activists use franchising to extract maximum profit from fast food workers and to keep wages as low as possible.” One of the protesters, Charles, said Bill Ackman was a target because he is a partial owner of Burger King. The protester also said that Ackman was a vocal proponent and financier of franchising operations.

Lauren Jacobs, another protester and organizer of the event who is associated with activist group Restaurant Opportunities Center United, said they group was protesting Jeff Smith because he controls Darden and that the restaurant chain is a major employer in many states that have some of the lowest minimum wages for tipped workers. She said if Smith were to get behind paying workers more, that would force other restaurant chains to follow suit. Her group’s website recently published an article accusing Darden’s Olive Garden of sourcing its seafood from a Thai company that allegedly uses slave labor. The article attributed its facts to a report by The Associated Press.

Ironically, the protesters interrupted a panel at the Active-Investor Summit on how companies can defend themselves against shareholder activists. On the panel were public relations guru Joele Frank, who runs her own firm, and lawyer David Katz of Wachtell Lipton Rosen & Katz. Both said at the beginning of the panel that they never work with activists.

Both Ackman and Smith were scheduled to speak at the conference later in the day. Neither could be reached for comment. The protesters said they were not able to obtain a schedule of the conference’s events in advance.