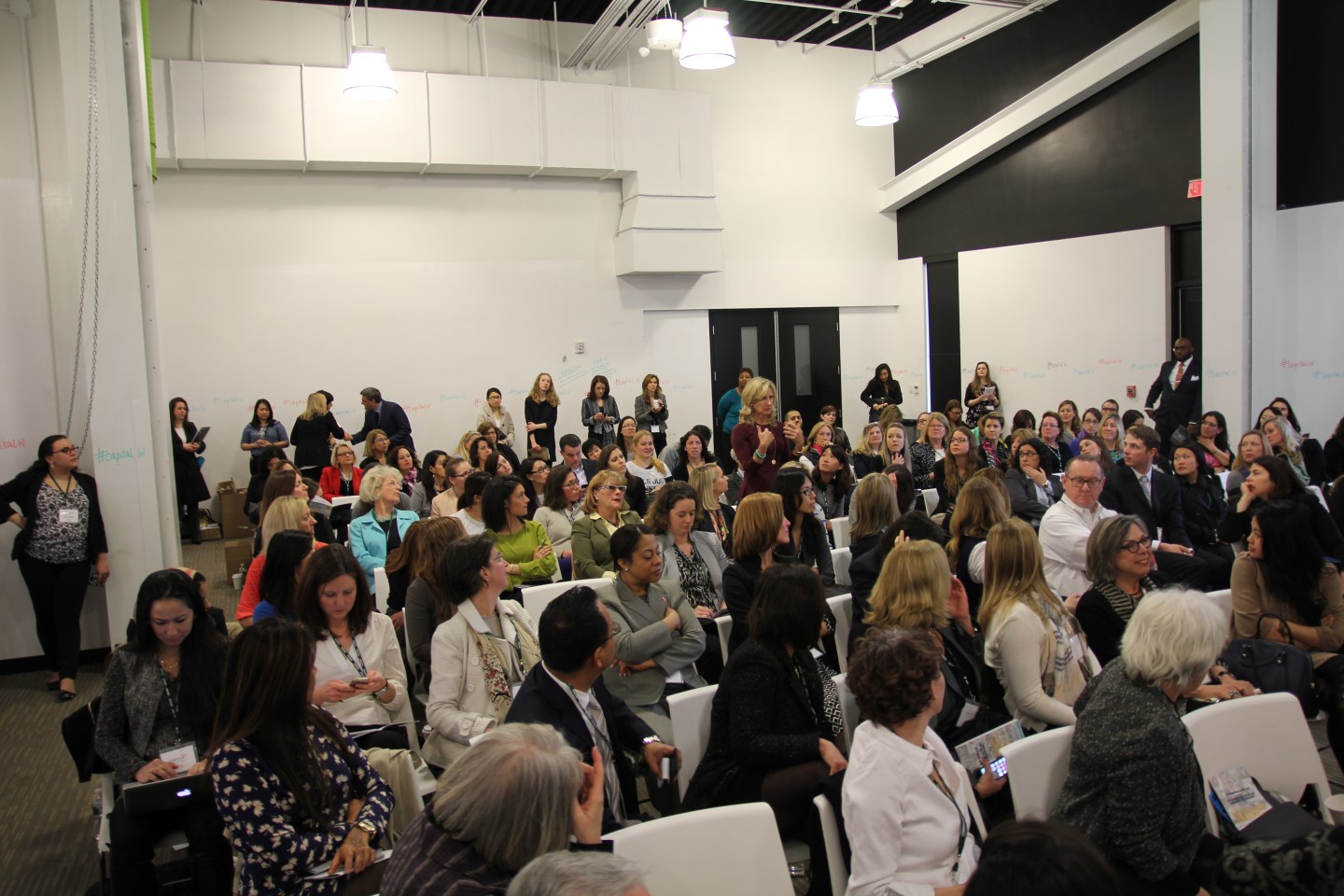 When Brenna Haysom took to the stage at the first Capital W: Boston Women’s Venture Capital Summit, it was clear that this gathering of VCs and entrepreneurs was no ordinary conference. The founder of a startup that makes a hangover remedy, she introduced herself by noting,” I am the founder and CEO of Blowfish. And I’m also very pregnant. So if I get a little breathless, don’t be alarmed.” The audience erupted in laughter, with one woman in the audience hooting.

Another entrepreneur, Gloria Kolb, started her pitch by flashing an image of a vaginal probe device and noting that stress urinary incontinence (SUI) is a condition afflicting one-third of women over the age of 30. Kolb is the founder of Elidah, a company that markets a wearable device for the condition.

Haysom and Kolb were among the eight female-led teams chosen to pitch their businesses Tuesday, receiving instantaneous feedback from seven of Boston’s top investors and financial minds. With roughly 160 attendees, the conference’s mission was to connect female entrepreneurs with financiers and close the current funding gap for women-owned businesses. A Babson College report shows that while women-led businesses perform largely better than their male-led counterparts, women receive less funding overall. Just 3% of venture-backed companies are led by female CEOs.

Though billed as a “pitch competition,” the pitches weren’t ranked by the judges, nor did any startups receive prizes or seed money. The goal was to help women founders make connections so that they can get the capital they need. Conference founder and investor, Sheryl Marshall, decided to launch conference after reading the gloomy Babson report last year. Having run a VC firm in the 1990s, she’d see firsthand gender bias and was “infuriated” at how little had changed. She connected with Lakshmi Balachandra, a professor at Babson College, and together they launched the summit.

At the event Tuesday, many of the entrepreneurs who got to pitch their businesses received plenty of encouragement from the seasoned investors. “If I weren’t a tech investor, I would invest,” Jeff Bussgang, General Partner at Flybridge Capital Partners and a VC specializing in tech startups, said after hearing Blowfish founder’s pitch. He noted the consumer products company had great numbers: An 88% gross margin, a $12 cost of acquiring a customer, and an average lifetime spend of $250 per customer. The product, too, is already available in CVS and Walgreens.

Eric Paley, also a judge and managing director at VC firm Founder Collective, said he was impressed that the founders had been “out doing their customer development, learning from their customers, and showing real traction in their businesses.” Laura D’Asaro and Rose Wang, co-founders of Six Foods insect foods company, were one such team. They had already raised more than $70,000 on crowd-funding site Kickstarter, launched the company’s first product (Chirps cricket chips), and been working around the clock to ship the first 10,000 units. The duo even got the judges to try the insect-based chips, to positive reviews.

Still, the VCs did offer some tough critiques. General Catalyst Partners’ Managing Director Larry Bohn told one entrepreneur that she needed to be “a little more ambitious” with her fundraising goals. “You need to raise more. Especially in the early stages of the business, you have the largest uphill battle. You have access to [customers], but reaching them and helping them get on-board, as well as building the software, I guarantee you, will take more” than the $180,000 she asked for.

John Burns, chief investment officer of VC firm and creative agency Breakaway, told Sara Ledterman, founder of an e-commerce publishing company Adorno Publishing, that she needed to hone her pitch. “You lost me on the first few slides,” he said, “but you got my attention when you showed me the numbers.”

Willma Davis, pitch judge and former senior managing director at John Hancock Financial Services, said in general, the entrepreneurs needed to be less shy about talking up their expertise (which research shows women tend not to do). “It wasn’t until the questions surfaced that you saw how connected and experienced some of these founder were,” she told Fortune.

Although many entrepreneurs and investors said they felt the summit was a good starting point, will any deals be made as a result? On that, the jury is still out.

Erica Swallow is a technology writer, startup entrepreneur, and status quo wrecker. She is currently an MBA candidate at the MIT Sloan School of Management and her work has been published in Forbes, Entrepreneur, The Wall Street Journal, and The Huffington Post, among others.