This burger fight has become an activist battle royale 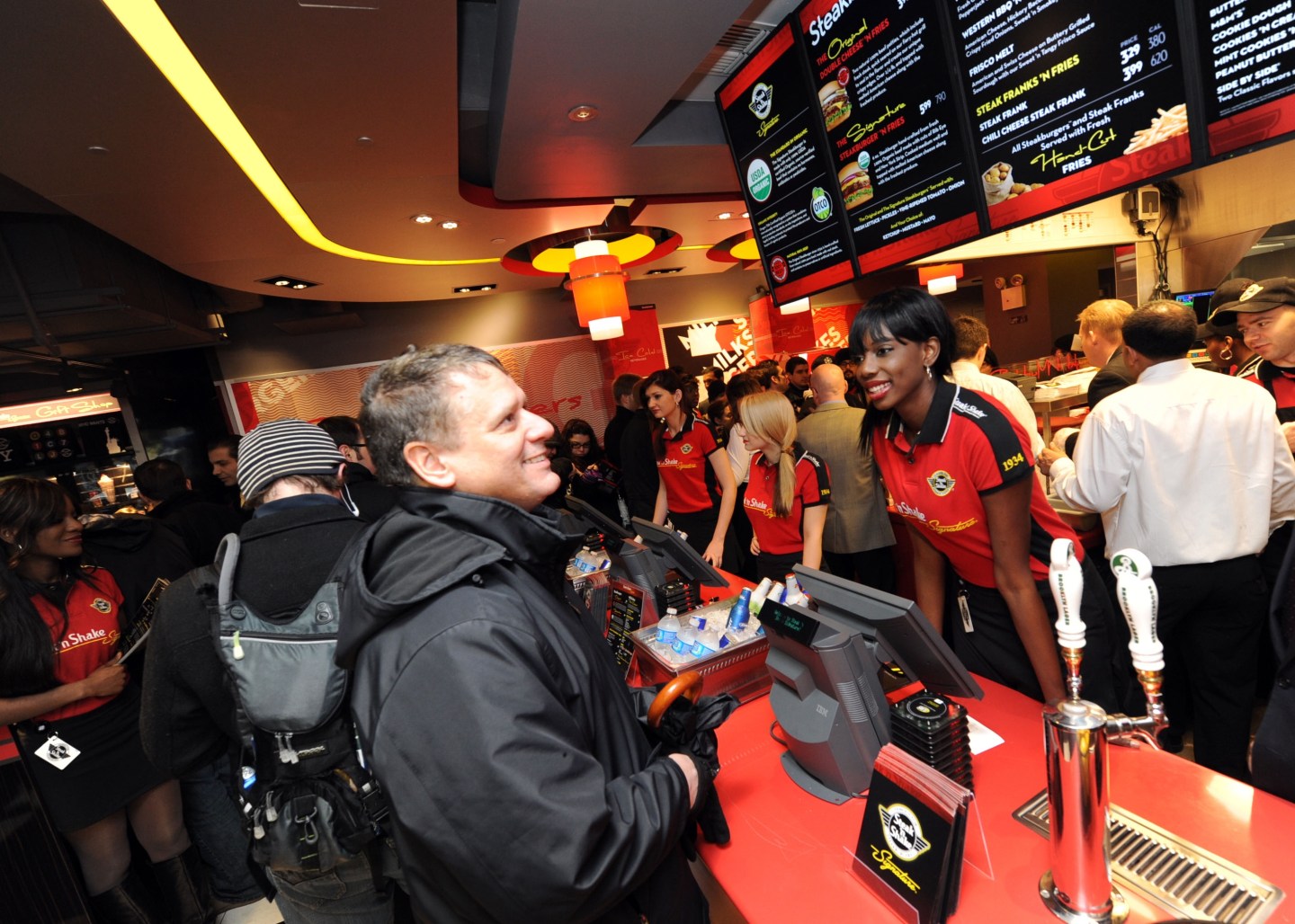 The shareholder activism trend may have just jumped the shark.

The investor fight over Steak ‘n Shake has all the hallmarks of many of the recent activist attacks. Groveland Capital, a hedge fund based in Minneapolis, says the burger chain’s owner Biglari Holdings (BH) is a poorly run firm. It says Biglari has poor corporate governance practices, and that Steak ‘n Shake would be worth more split up. Groveland wants to replace the company’s board and management. At least one other large shareholder is growing increasingly frustrated with management as well.

No one has yet to suggest that Steak ‘n Shake needs to salt its fries.

Still, there is one big difference that makes the Steak ‘n Shake fight different from other recent activist shareholder battles. The company’s owner is not run by some lazy or complacent CEO. It is run by another activist.

Sardar Biglari, who is the CEO of Steak ‘n Shake’s owner, is used to bruising shareholder fights, but usually from the shareholder side. He had a long-running battle with another restaurant chain, Cracker Barrel. In that fight, Biglari has pushed for a board seat and criticized the CEO’s strategy. But this is Biglari’s first time on the receiving end of a shareholder activist attack.

The Biglari fight shows just how crowded the activist investor space has become. A few years ago, activist investors typically went after mid-size, troubled companies. There were more than enough of those to go around. But as activist hedge funds have attracted more assets and more funds have launched, they are increasingly going after bigger companies and are starting to bump into one another. Activist investor Nelson Peltz, who runs hedge fund Trian Partners, has recently come under attack by another activist hedge fund, Mercado Partners, over Bank of New York. Trian ran a near-year-long campaign to force change and get a representative elected to the board of Bank of New York. It landed a board seat in December. Now, three months later, Mercado is suggesting that Trian is too close to management.

What’s more, the Biglari fight suggests that, once they take control of a company, activists are susceptible to the same excesses and corporate governance problems that activists often complain about in the first place.

And, like other recent activist fights, the battle has involved plenty of mudslinging. Groveland CEO Nick Swenson has accused Biglari of running Steak ‘n Shake like he has been elected CEO for life. Earlier this week, Biglari Holdings issued a press release that called Swenson a hypocrite and a failure, and his investment partners “cronies.”

“Do not allow Nick Swenson to get his hands on your company at your expense,” Biglari Holdings said in the release.

In a statement to Fortune, Swenson said, “We want to be a catalyst for reform and positive change at Biglari Holdings. That’s our focus, and we believe shareholders are smart enough to pay attention to the issues.”

The proxy vote to unseat Biglari Holding’s board and, with it, likely Biglari from his job of CEO, is on Thursday afternoon. And proxy voting advisory firm ISS has basically thrown up its hands, suggesting that shareholders don’t vote for either side. “Neither choice is appealing,” wrote ISS.

At issue in the fight over the owner of Steak ‘n Shake is a hedge fund. Biglari, along with running Biglari Holdings, also manages the Lion Fund. The hedge fund is housed inside of Biglari Holdings, and large portion of its assets are the companies own cash. Biglari gets a paycheck for being the CEO of Biglari Holdings, but he also collects hedge fund management fees for his work running the Lion fund. By Groveland’s estimate, Biglari has collected $70 million in compensation from the company for the past three years, far more than most restaurant executives. On top of that, Groveland accuses Biglari of diverting corporate cash into the hedge fund that should be used to reinvest in Steak ‘n Shake’s business, or be given to shareholders.

Biglari has also hired his father Ken as a consultant, and his brother Shawn as a “director of business development.” The company says both are paid less than $120,000 a year each. On top of that, Biglari has rebranded a number of the company’s restaurants, including it’s high profile one in New York City, which was opened in 2012, “Steak ‘n Shake by Biglari.” Steak ‘n Shake is allowed to use the Biglari name through licensing with Biglari that would pay him $100 million if Biglari were to ever leave the company or get fired.

Biglari took over Steak ‘n Shake seven years ago, winning all the board seats in an activist fight. Groveland says Biglari Holding’s earnings growth has been disappointing, and over Biglari’s full tenure has not turned out to be much better than prior management that he threw out.

On top of that Biglari used Biglari Holdings to buy the money losing men’s magazine with a bro reputation Maxim. So far, the acquisition does not appear to be working out.
[fortune-brightcove videoid=4023428819001]

Biglari says the company’s stock price speaks for itself. Since Biglari took over Steak ‘n Shakes’ owner in mid-2008, shares of Biglari Holdings are up 267%, versus 92% for the S&P 500 in the same time. A recent Biglari Holdings press release says when Biglari took over the company, Steak ‘n Shake’s customer traffic was falling 10% a year, the company was losing money, and its lenders were threatening to pull its loans. Under Biglari, though, the company has had 25 straight quarters of profits. “Under present management, Steak n Shake has experienced one of the great brand turnarounds in the history of the restaurant industry,” said the release. The hedge fund, a good portion of which is invested in Cracker Barrel, has also done well, beating the market. Recently, Biglari’s hedge fund has been buying shares of Biglari Holdings.

One of Biglari’s biggest backers has been legendary value investor Mario Gabelli, whose Gabelli Asset Management is the largest outside shareholder of Biglari holdings, with about 9% of the company. About a decade ago, Gabelli, after buying a small stake in the restaurant chain, visited a Steak ‘n Shake restaurant in West Palm Beach, and ordered a hamburger. (Steak ‘n Shake doesn’t actually sell steaks. It sells “steakburgers” and “steakfranks,” which are hamburgers and hotdogs. It does sell milkshakes.) Gabelli says when he got the burger, he walked right to garbage, threw out the burger and walked out. “It looked terrible,” says Gabelli. “I couldn’t even take a bite.”

A few years later, after Biglari took over, Gabelli returned to the same restaurant in West Palm Beach. This time Gabelli ate his burger and a shake. Gabelli says it was delicious. Gabelli says what Biglari has done with Steak ‘n Shake has been amazing, and he thinks Biglari is a talented investor. But Gabelli, like Groveland, thinks Biglari may be taking too many bites of the apple. Gabelli has repeatedly warned Biglari against voting the shares he has acquired with company funds in the hedge fund for his side. Gabelli says doing that would subvert the shareholder voting process, which should be a democracy. A source close to the company says Biglari is likely to used the company’s shares to vote for his own board members. If that happens, Gabelli says he is likely to vote his shares with the Groveland side.