This gaming company is worth $1 billion, and you’ve probably never heard of it 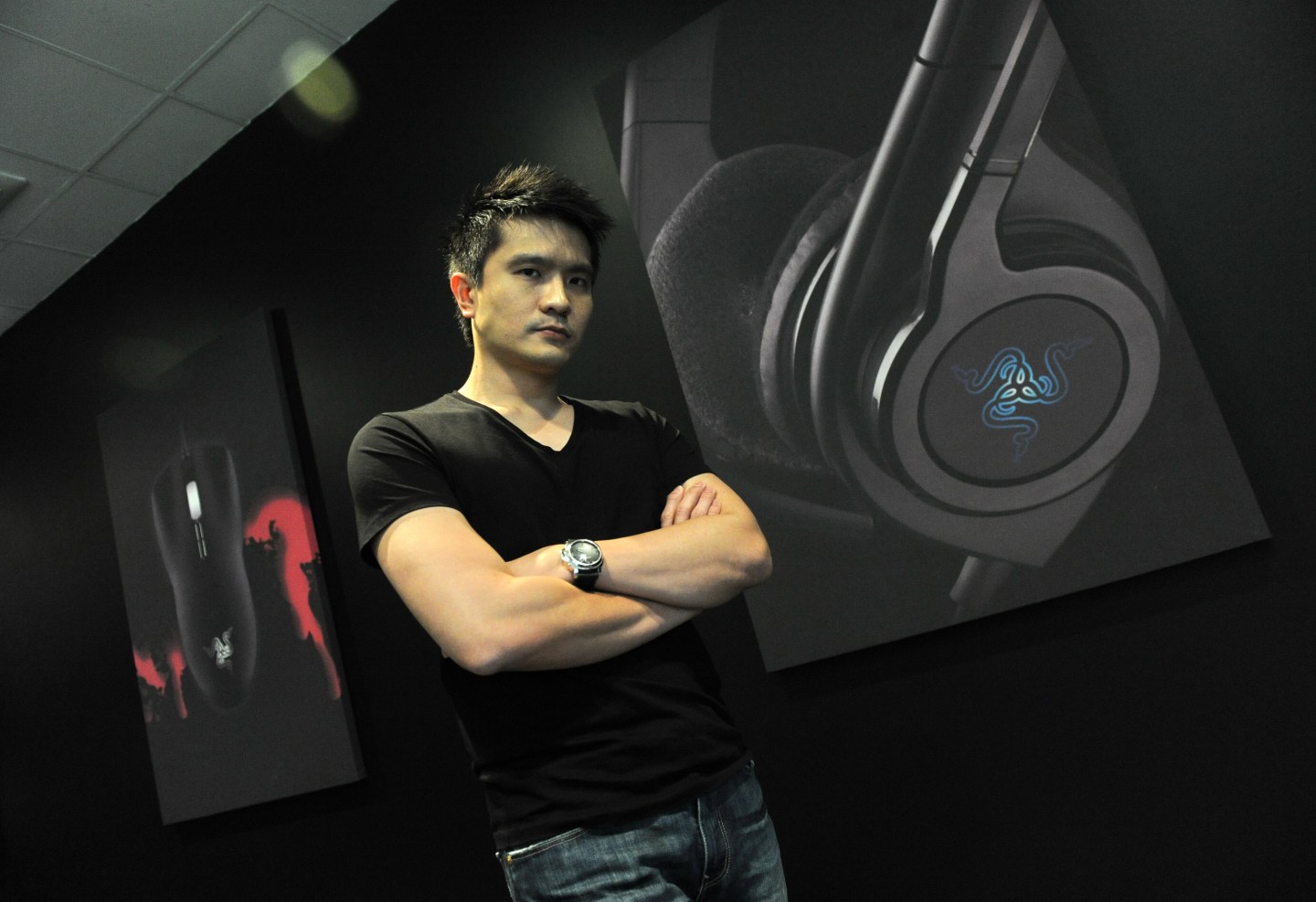 TO GO WITH: Asia-technology-computer-gaming,FOCUS by Philip Lim This photograph taken on October 27, 2011 shows Tan Min-Liang, the Singaporean co-founder and chief executive officer of Razer, poses at the company's research and development centre in Singapore. Razer is a cult brand among hardcore gamers worldwide who lust after high-performance devices such as mice, keyboards, headsets and joysticks. AFP PHOTO / ROSLAN RAHMAN (Photo credit should read ROSLAN RAHMAN/AFP/Getty Images)
Photograph by Roslan Rahman — AFP/Getty Images

Have you heard of Razer?

Most people that aren’t avid gamers haven’t—but they should. Investors now value the Carlsbad, Calif. video game accessories company at $1 billion, securing it a place on Fortune‘s Unicorn List. The company has been on a tear lately, recently expanding beyond mice, keyboards, and other controllers into virtual reality and “micro-consoles” and wearables built on Google’s Android mobile operating system. With winds at its back, it’s a prime target for acquisition by a large company like Microsoft (MSFT).

In the video game world, Razer is among the most well-known brands in the business. Peter Warman, a video game analyst at Newzoo, estimates the company’s 2014 revenues to be between $250 and $300 million. With its raised funds—from IDG-Accel China Capital Fund in 2011 and Intel Capital more recently—“they now have the cash to grow these new businesses without losing focus on where they came from,” Warman says.

But its enormous valuation is likely a product of the company’s high-profile partnership with Tencent in China, which will allow it to integrate WeChat, the Chinese company’s popular messaging service, into its Nabu wrist bands, which are intended for a broad audience beyond hardcore gamers.

“Razer has an almost ‘cult status’ brand image that it has built up over the past 15 years,” Warman says. “What also sets it apart from most competitors is the range of products that includes both console and PC peripherals, as well as gaming laptops. Razer has always been motivated to use its software with its products, giving them a more continuous relationship with their users. This is an important asset in the broadening of their product portfolio into tablet controllers, smart bands, and the Open Source Virtual Reality platform. These services could open up completely new business models for Razer.”

Warman believes Razer’s cross-platform focus on gaming enthusiasts could be a good fit for an acquirer like Microsoft, which plans to introduce a PC-console game offering with Windows 10. The OSVR platform may also be of interest to the folks in Redmond.

Tan, Razer’s chief executive officer, believes that the company’s independence has been integral to its success. Razer has 400 employees and 10 offices across the U.S., Europe, and Asia. “Whether we are part of a larger organization or we do it ourselves, it’s really what Razer stands for as a brand,” Tan says. “I really don’t think it makes a difference. What makes a difference is that the people within Razer continue to focus on delighting our users all the time and exceeding their high expectations.”

Despite competition from companies such as Logitech, Mad Catz, Corsair, and SteelSeries, Razer has distinguished itself by operating as a so-called platform company, rather than as a pure product manufacturer. Still, it dominates: Razer is currently the number-one maker of gaming mice and gaming keyboards in the world and leads the pack in the ultra-competitive gaming headphones market, despite strong competition from Turtle Beach, Astro Gaming, Polk, and HyperX.

“While other companies either sell hardware or make software, we do both,” Tan says. “And we integrate the software with the hardware really well. If you go on Facebook or Twitter or WeChat we are the world’s leading lifestyle brand for gamers, and gaming has become a larger subculture over the years. And we don’t just participate in the industry. We are focused on pushing core technology as opposed to just making something in China.”

Razer has an active community of over 3.7 million gamers who not only buy its gaming laptops and accessories, but use its voice-over IP services and purchase Razer-branded clothing. The company has sold over 13.5 million connected devices and has over 11.5 million registered users across its software platform. And it registers approximately 20,000 new gamers daily.

Razer debuted its OSVR platform at this year’s Consumer Electronics Show in Las Vegas. A dozen companies have since signed on as partners, including Hollywood studio Jaunt and game engine maker Unity. Tan says Razer wants to give game hardware and software companies the ability to develop products that will work seamlessly across Oculus, Sony, Samsung, and other virtual-reality devices. Razer is also developing its own VR controllers for the platform.

It’s also entering the second screen experience with Forge TV, a micro-console that will allow gamers to stream PC games to their TV and also play mobile games on the large screen. And its Nabu X smart band is designed to allow gamers to connect with each other in the real world and share game information. Together, the devices give Razer presence on all four screens that today’s gamer uses: PC, TV, mobile, and wearable.

“We see a blurring of lines across all of these four screens and we want to provide a holistic, integrated experience for gamers,” Tan says. “What differentiates us from everyone else is that we are hyper-focused on the gamer. They have an incredibly strong influence on technology.”

And, Razer hopes, its future revenues.