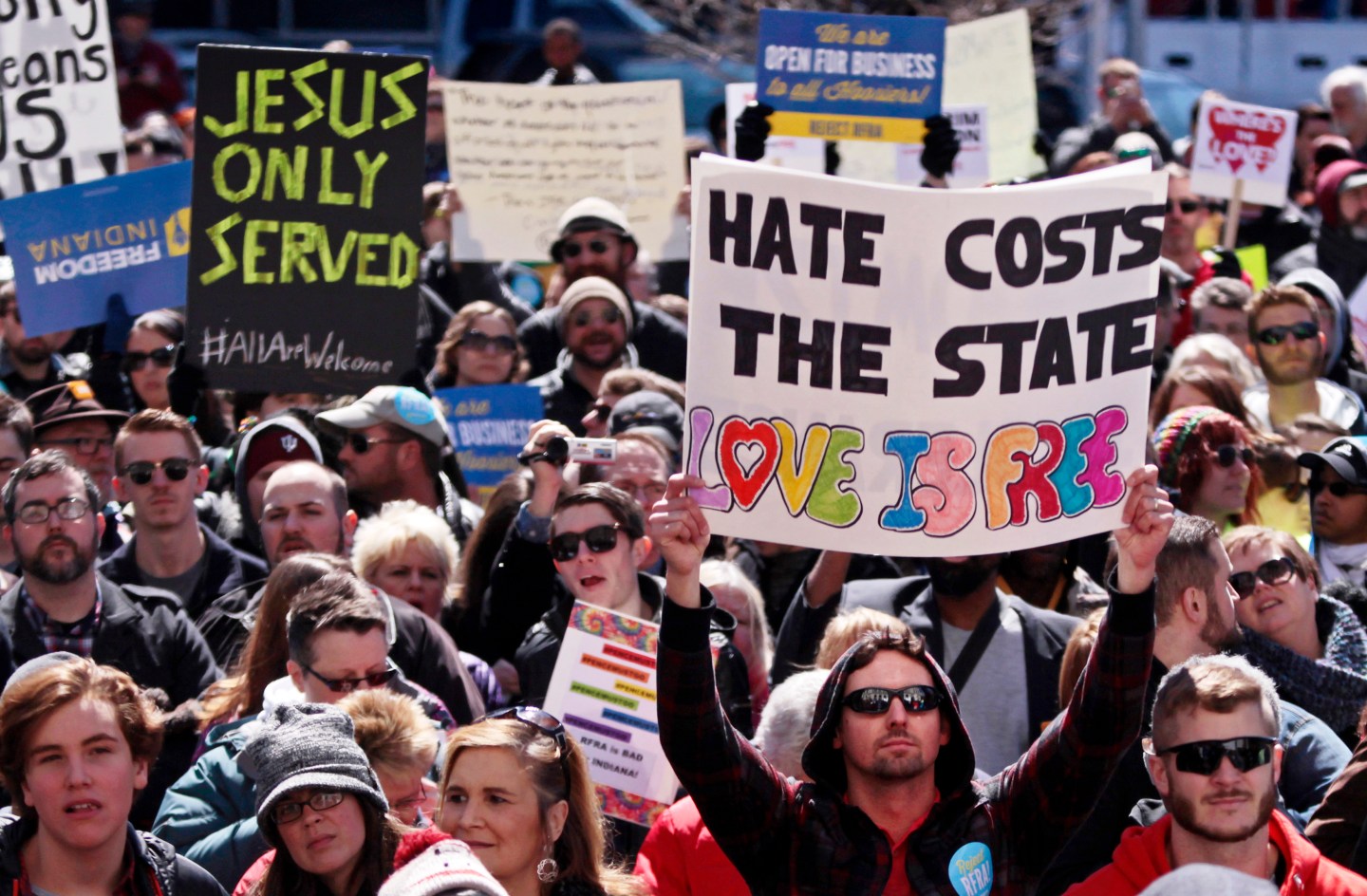 The controversial religious freedom laws in Indiana and Arkansas have divided the nation into two separate camps: one that sees the laws as protecting religious freedom from government intrusion and another that believes they license discrimination against gays and lesbians.

It’s ironic then that a federal law considered to be a unifying force served as the model.

Indiana Gov. Mike Pence and Arkansas Gov. Asa Hutchinson have pointed to the Religious Freedom Restoration Act, a federal law passed in 1993 under President Bill Clinton, as the blueprint for their states’ religious freedom bills. When Clinton signed the law into effect more than two decades ago, the measure was seen as anything but divisive; in fact, it gained wide support.

Watch a clip of the ceremony here:

The catalyst for the so-called RFRA legislation was a 1990 Supreme Court decision in the Employment Division of Oregon v. Smith case brought by two Native Americans who’d been fired from a private drug rehabilitation organization for ingesting peyote during a religious ceremony. They filed a lawsuit after the State of Oregon denied their request for unemployment benefits, citing a state law disqualifying employees discharged for work-related “misconduct.” The Supreme Court eventually sided with the state, ruling that officials could enforce laws even if it hindered individuals or groups from practicing their faith.

Three years later, courts had ruled against people in as many as 50 cases who had claimed religious arguments against the government, Clinton said in signing RFRA into law in 1993. Vice President Al Gore listed a series of horror stories. Coroners conducted autopsies on people whose religion barred them, he said. City rezoning excluded churches in certain neighborhoods, requiring residents to travel longer distances to attend services. Local governments dictated the design of houses of worship, overriding the wishes of the congregations.

RFRA landed on Clinton’s desk after gaining approval with a 97-3 vote in the Senate and a voice vote in the House. At the signing, Clinton and Gore praised the coalition of religious and civil rights groups that had come together to back the legislation. Sixty-eight groups had signed on to the bill.

“You know when you have the National Association of Evangelicals and the American Civil Liberties Union; the National Islamic Prison Association and B’nai B’rith; the Traditional Values Coalition and People for The American Way; we’re doing something right here today,” Gore said at the time.

Clinton said that passing legislation aimed at overturning the Supreme Court rulings was “a power that’s rightly, hesitantly and infrequently exercised by the United States Congress,” but one that was “clearly called for” in the case involving the Native Americans in Oregon. As he signed RFRA, Clinton said the new law “basically says [that] the government should be held to a very high level of proof before it interferes with someone’s free exercise of religion. This judgement is shared by the people of the United States as well as by the Congress. We believe strongly that we can never—we can never—be too vigilant in this work.”

He spoke with stirring rhetoric about the vital role the free exercise of religion had played in American history, saying “it’s been called the first freedom, that which originally sparked the development of the full range of the Bill of Rights”—and credited it with producing the “oldest democracy now in history and probably the most truly multiethnic society on the face of the earth.”

(A 1997 decision by the Supreme Court kept the law Clinton signed from being applied to the federal government, which prompted states to introduce the Act at a more local level.)

The theme of unity that surrounded RFRA in the early 1990s has been blatantly absent from this week’s discussions about the laws in Indiana and Arkansas. That’s partly because the state laws are not identical to the federal legislation. And of course, the huge advancement in LGBT rights and the growing acceptance of same-sex marriage provide a wholly different backdrop to the recent legislation than the one present in 1993.

On Thursday, the state legislatures of Indiana and Arkansas passed and both governors signed “fixes” to their state RFRA laws to align them more closely with Congress’s 1993 version, but even those tweaks were polarizing. Liberal critics say that the new versions didn’t go far enough to ban discrimination while social conservatives said the changes watered down the legislation.