Heineken shakes up and slims down management as sales flag 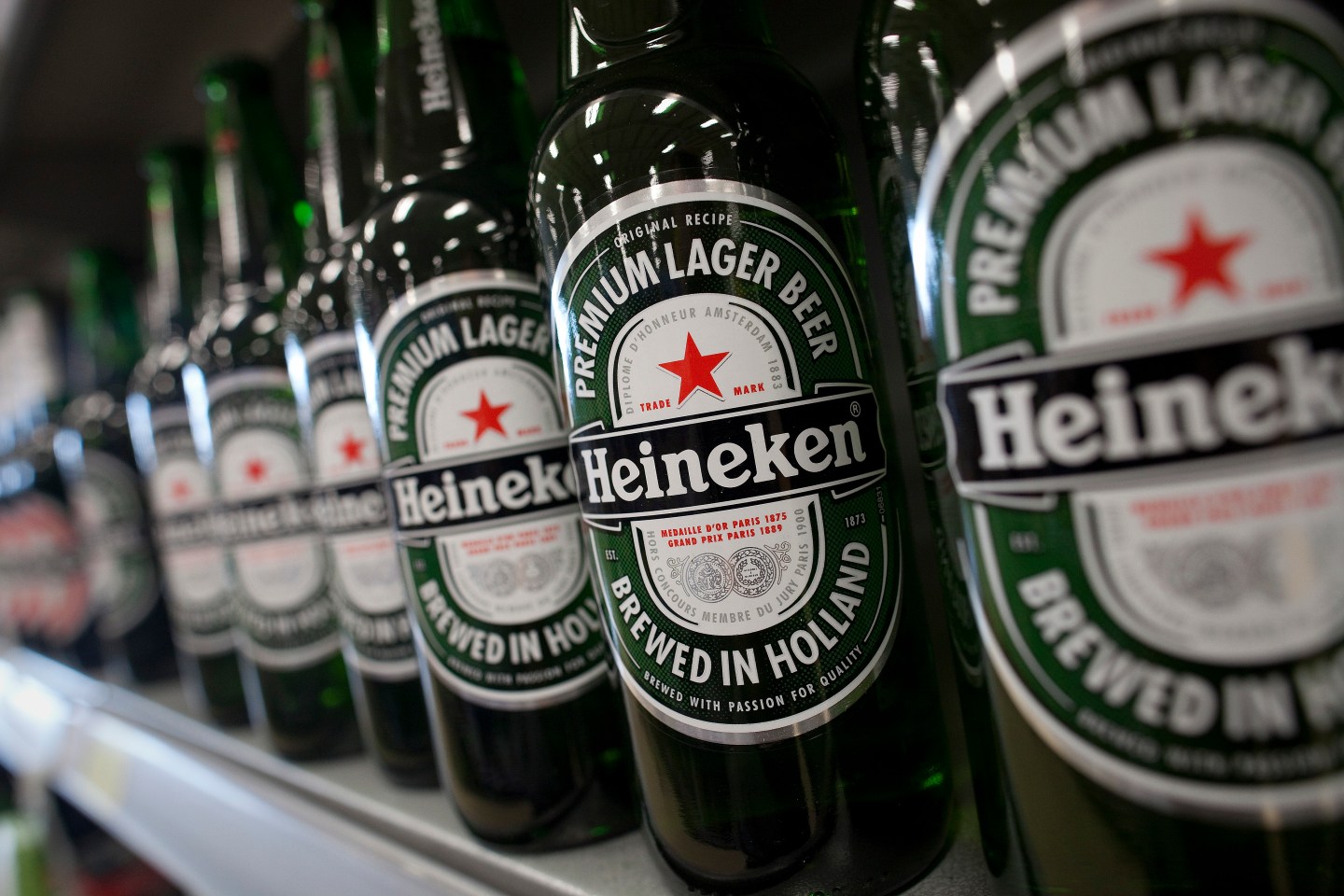 Bottles of Heineken NV lager are displayed for sale in the 'beers, wines & spirits' aisle of a supermarket in Slough, U.K., on Monday, Sept. 3, 2012. U.K. retail same-store sales barely rose in July, according to the British Retail Consortium, as consumer confidence was undermined by the double-dip recession and the euro-area debt crisis. Photographer: Simon Dawson/Bloomberg via Getty Images
Photograph by Simon Dawson — Bloomberg/Getty Images

Heineken NV (HINKF), the world’s third-largest brewer, has shaken up its management team in an effort to pep up a sales performance that has been anything but frothy in recent months.

The move comes only six months after the company rejected an approach from SAB Miller that would have ended its 150-year tradition as a family-controlled business (read Fortune’s in-depth profile of the heiress who controls Heineken’s fate here), a move that prompted questions as to what else it could to catch up with more profitable rivals. Sales last year grew at their slowest rate since 2007, a measly 0.1% (although profits rose by a more respectable 11%).

Three top executives, including chief marketing officer Alexis Nasard (also the regional president for the home market of western Europe) will leave, and the company will merge some senior offices in an attempt to flatten and streamline its management.

At the same time, in a move that speaks volumes about the dramatic decline of the once red-hot Russian market, Heineken said it would abolish its central and eastern European region, and lump its Russia and Belarus businesses in with its Africa and Middle East division. The rest of the faster-growing central European operations like Zywiec in Poland will be combined with western Europe.

Heineken’s shares are up about 40% since August, when the market got wind of SABMiller’s approach. But for that is has to thank a mixture of looser ECB policy and investors’ hope that SABMiller would return with an improved offer, rather than investors’ conviction in a great growth story.

The shares fell on Tuesday as the company parted ways with a couple of its most dynamic officers. Nasard had greatly sharpened the group’s marketing, while chief strategy officer Chris Barrow had masterminded much of the company’s expansion in emerging markets over the last 10 years.

Barrow’s departure underlines the fact that “merger and acquisition opportunities are going to be bolt-on deals with local brewers in future rather than major transformational deals,” said Morningstar analyst Philip Gorham. “There’s not much for an M&A man to do when it can all be handled by local corporate finance people.”

Nor is the operating outlook that much more exciting. Apart from a dividend increase last year, Heineken’s big sales pitch to investors is a promise to raise operating margins by 0.4 percentage points a year, but its current margin of 17% is barely half of what SABMiller and industry leader Anheuser-Busch Inbev (BUD) boast, Gorman points out, and Jonathan Fyfe at Mirabaud Securities says the company still hasn’t really answered how it’s going to close the gap.

ABI, Fyfe reckons, is in a better position to put pressure on Heineken than vice versa, by squeezing it in Asia and Mexico, one of the few Latin American markets where Heineken is strong. At the same time, Heineken is heavily invested in Nigeria and Russia, two big markets where the collapse in oil prices has sharply eroded the value of local currencies and local sales (ABI faces a similar problem in Brazil, admittedly).

Russia’s market was already in reverse after five years of aggressive taxation and regulation, designed to stamp out alchololism. Sales volumes fell 18% between 2008 and 2013, and even though values rose by nearly 50% in that period, the government has raised excise duties on beer by 500%, and consequently takes a much bigger cut of a now–in any case sharply devalued–pie.