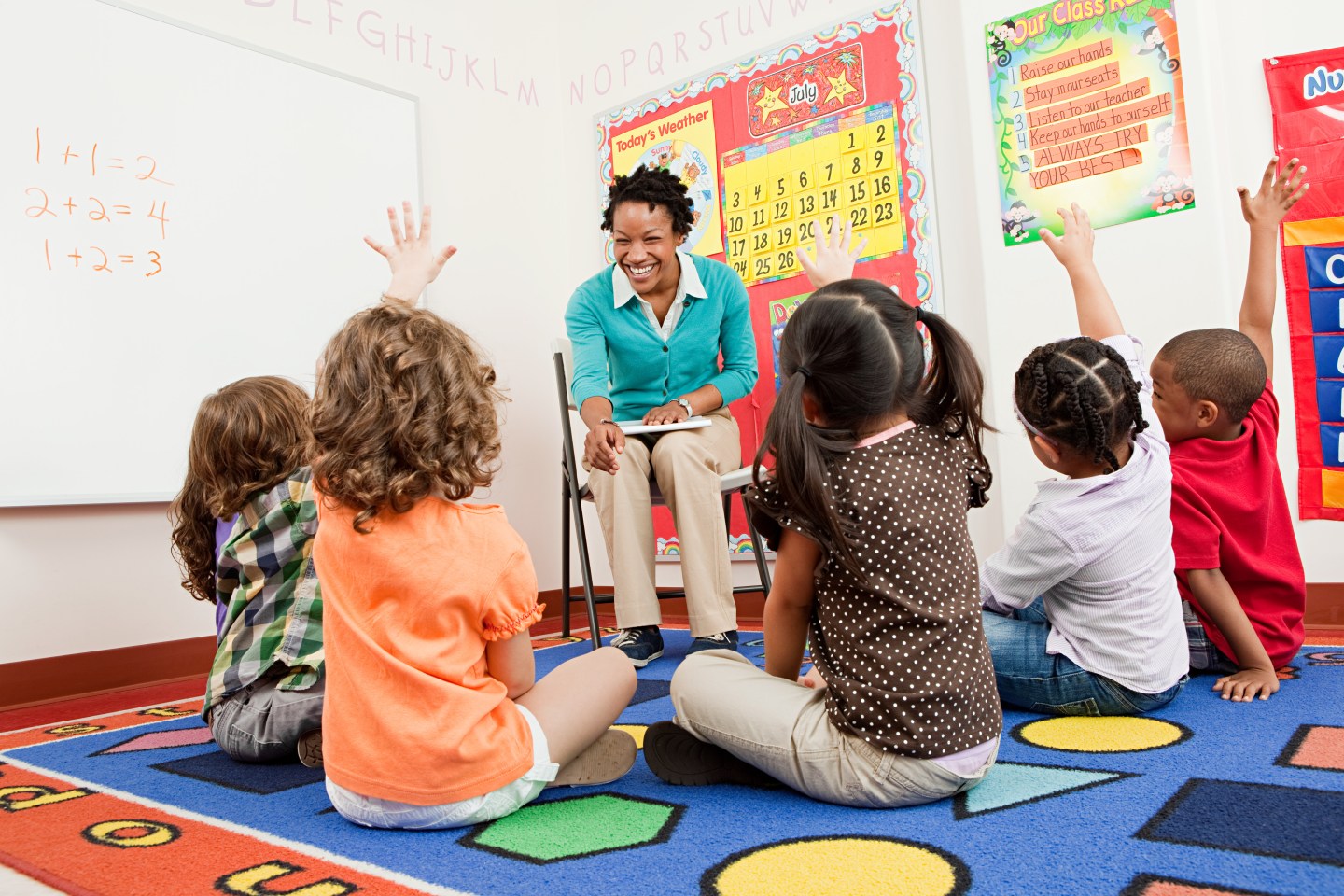 In the wake of minimum wage increases at Wal-Mart and Target, a new group of workers has joined the campaign that’s being credited for helping prompt such pay hikes.

Mary Kay Henry, president of the Service Employees International Union, which backs the Fight for $15, told Fortune that child care workers protesting alongside fast-food workers illustrates a dual crisis: underpaid working parents are struggling to pay for child care and those who care for others’ children are struggling to take care of their own.

Child care workers in the U.S. earn median pay of $9.38 per hour, according to the Bureau of Labor Statistics. That is comparable with the earnings of food preparation workers—$9.28 per hour—and retail sales employees—$10.29 per hour—and is especially measly when weighed against child care workers’ role in early childhood education.

Responsive, sensitive, and secure adult-child attachments are developmentally expected and biologically essential for young children; their absence signals a serious threat to child well-being, according to a 2012 study by the National Scientific Council on the Developing Child. Findings such as these help explain the child care industry’s growing expectation that its workers have college degrees. The share of Head Start teachers with an associate or bachelor’s degree grew by 61%; for assistant teachers, it increased by 24% between 1997 and 2013.

And yet child care workers regularly earn less than adults who take care of animals. Indeed, Head Start achieved its goal of having at least half of its teaching force hold a bachelor’s or advanced degree in early childhood education by September 2013, but its employees’ salaries have not kept up with inflation since 2007.

“If you look back over the last 25 years, we’ve learned so much about early childhood development. We have a 21st century set of expectations [about childhood development], but in many ways we still have a 20th century view of work and pay structure [for child care workers],” says Marcy Whitebook, director of the Center for the Study of Child Care Employment at the University of California, Berkeley. “There’s a gap between the expectations and promise of early childhood and the way we think about the people who do the work.”

That gap is putting the quality of child care at risk. Research points to wages as a key factor in the retention of high-qualified teachers, which, in turn, is the best predictor of whether a child care center maintains quality over time.

Low wages inflict additional harm on the individuals who are providing the care.

Corrine Hall, a 53-year-old from Raleigh, North Carolina who has worked in child care for 30 years, told Fortune she currently earns $8.25 per hour serving as a substitute caregiver at various child care centers. She was laid off from a full-time job two years ago. In the three decades she has worked in the field, she’s never earned more than $13 per hour. Her low wages forced her to use food stamps earlier in her career as she cared for two daughters by herself. She has little savings for retirement. “I don’t have anything to fall back on. Hopefully social security will be around. Other than that and my family, that’s pretty much all I have,” she says.

Hall is far from alone in her reliance on public assistance. In 2012, 46% of child care workers—versus 25% of the nationwide total workforce—was a member of a family enrolled in at least one of four public support programs: the Federal Earned Income Tax Credit, Medicaid and the Children’s Health Insurance Program, the Supplemental Nutrition Assistance Program, and Temporary Assistance for Needy Families, according to a 2014 study by the Berkeley Center.

Underlying the wage issue is the high cost of child care itself, which makes industry workers’ poor pay all the more surprising. For parents, full-time infant care costs—on average—between $4,560 and $16,549 per year, depending on the state and child care center setting. For a four-year-old, it ranges from $4,039 to $12,320. The Berkeley Center’s analysis shows that there’s been a two-fold increase in the cost to parents for early childhood services since 1997. At the same time, child care workers have experienced no increase in real earnings, even as payroll and related expenses make up 80% of the cost of a child care program.

Where is the increased cost of child care going, if not to workers? Deborah Phillips, a professor of developmental and child psychology at Georgetown University who worked on the 2014 Berkeley study, put it bluntly: “We have no idea.”

Phillips surmises that the increased expense could be related to the growth of for-profit childcare centers.

Meanwhile, Rachel Demma, policy director at the Early Care and Education Consortium, which represents child care centers, says most for-profit providers make very little profit and, like their non-profit counterparts, spend the lion’s share of their revenue on staffing expenses. She said the growing cost of child care could be due to fluctuations in state reimbursement rates to providers that serve needy families. M-A Lucas, director of the Consortium, points to stricter caregiver-to-child ratios and the increased prevalence of labor-intensive infant care as two potential reasons for the skyrocketing costs and stagnant worker pay.

The answer to a second question may be just as hard to pin down: who will pay for child care workers’ higher wages?

There’s little disagreement that parents are already paying enough. Lucas says she’s concerned about the wages of the child care workforce, but her organization’s stance is to “advocate for policies that won’t shift the burden of increased program costs to families.”

Whitebook from the Berkeley Center says early childhood education should be a public good. “Like public education, not everyone has to use it, but it should be there.”

President Barack Obama’s recent proposal for a $3,000 child care tax credit and some states’ and cities’ introduction of universal pre-kindergarten offer some hope, as does the Department of Defense’s Military Child Care Act, which successfully established new quality standards for the department’s child care providers and linked teachers’ training to their pay.

“People have solved this problem,” Phillips says. “There are multiple ways to do this; it’s just about making it a national imperative for private and public entities.”