Barcelona: A victim of its own tourism success? 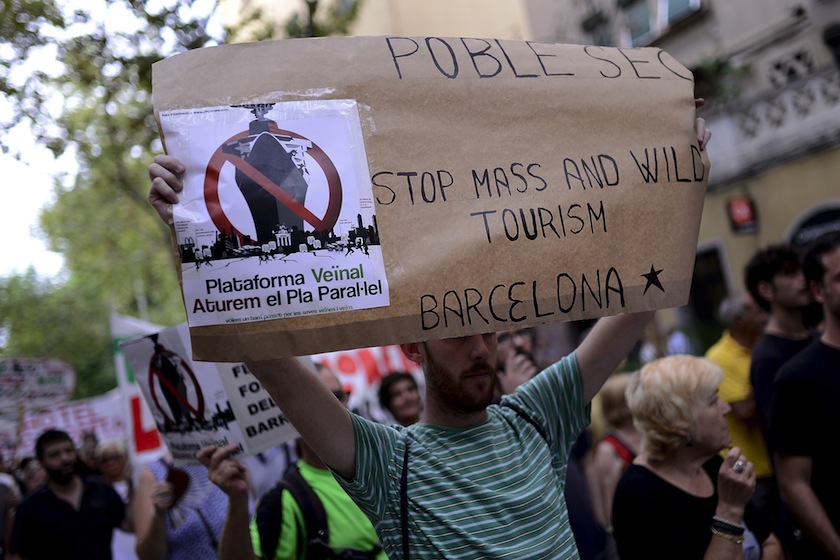 A resident of La Barceloneta holds a placard during a demonstration against "drunken tourism" in their neighbourhood in Barcelona on August 30, 2014. AFP PHOTO/ JOSEP LAGO (Photo credit should read JOSEP LAGO/AFP/Getty Images)
Photograph by Josep Lago—AFP/Getty Images

Last August, Barcelona photographer Vicens Forner snapped a picture that showed up in newspapers around the globe: In it, a group of young Italian tourists are cavorting through the streets of his seafront neighborhood, Barceloneta. It is mid-afternoon, and the guys are the very image of happy travelers.

They are also buck-naked.

For many in working class Barceloneta, the Italian flesh was the last straw. Over the next few evenings, several thousand locals poured onto the humid summer streets to chant and bang pots in protest of tourism overload. Their banners read, “The neighborhood is not for sale.”

Like many European cities, from Paris to Prague to Venice, Barcelona has bet hard on tourism. The city began to woo tourists with the 1992 Olympics, when it cleaned its beaches, built cruise ship docks, expanded its airport, and rehabilitated its neglected Old City, the Ciutat Vella.

And the tourists complied: according to government figures, between 1990 and 2013 the number of annual visitors who stayed overnight exploded from 1.7 million to 7.6 million, and the number of hotel rooms grew from 10,265 to 37,069. Today, tourism account for about 14% of the Barcelona’s economy.

But now many locals are asking, how much tourism is too much?

In this compact city of 1.6 million residents, the tourist impact is impossible to miss. Today, 79% of the people on La Rambla, the main avenue in the Ciutat Vella, are not from Barcelona; 58% are foreign tourists. Packs of bachelor and bachelorette parties from around Europe stumble through the Ciutat Vella at night, regularly vomiting in the streets and hiring prostitutes.

And the effects are not limited to the Ciutat Vella. Tourists groups and buses have made the areas around monuments designed by famed Catalan architect Antoni Gaudí – most notably Park Güell and the Sagrada Familia, both UNESCO World Heritage sites – virtually unrecognizable as residential neighborhoods.

In the most touristic barrios, residents are losing their apartments as landlords convert them into short stay rentals, and it is difficult for those who remain to find stores selling anything but cheap beer, souvenirs, and the No. 10 jersey of Barcelona soccer star Lionel Messi.

It is this loss of local identity, as much as the tourist hordes, that make people like Llum Ventura Gil, a longtime Barceloneta resident who recently left the barrio because of tourism overload, complain that their neighborhoods have been turned into “theme parks.”

“Barcelona is losing its essence,” she says.

Barcelona is not alone, and the struggle of European cities has even spawned a subgenre of documentaries bemoaning mass tourism. Barcelona has Bye Bye Barcelona, a film by Venezuelan filmmaker Eduardo Chibás that has received over 300,000 YouTube views; Berlin has Welcome and Goodbye; and Venice has The Venice Syndrome. (One common feature of the genre? The irritating sound of squads of roller bags clicking over cobblestones.)

The head of Barcelona’s hotel chamber, Jordi Clos, says the city should aim to get to 10 million overnight tourists a year to put it in the “first division” of European cities. But locals question whether mass tourism has already made parts of the city unlivable. Many Barcelonans have fled: between 2006 and 2013, 14,600 people – 12.3% of the population – left Ciutat Vella.

Pushed by citizen protests, the city and regional government has finally begun to take action. Last year it put a moratorium on new licenses for short-stay apartments and fined Airbnb €30,000 for hawking illegal tourist rentals.

After the Barceloneta outburst, it sent more police and inspectors into the neighborhood and began to bust landlords who rent out unlicensed tourist units, quickly closing 170 short-term apartments.

And in late February, some 250 locals packed a public audience (while many more waited outside) to grill one of Barcelona’s deputy mayors on the city’s plans for handling tourism.

But the going is slow and some question whether the local government has the political will to regulate one of Barcelona’s prime industries.

Tourism has enriched cities like Barcelona in financial and other ways. The irony of mass tourism, however, is that it destroys the enchantment that attracted tourists in the first place. It’s unclear if efforts to regulate it will come too late to “save” Barcelona from its success.

“Tourism is unstoppable,” says the filmmaker Chibás. “It’s how you manage it so it doesn’t become another Venice.”