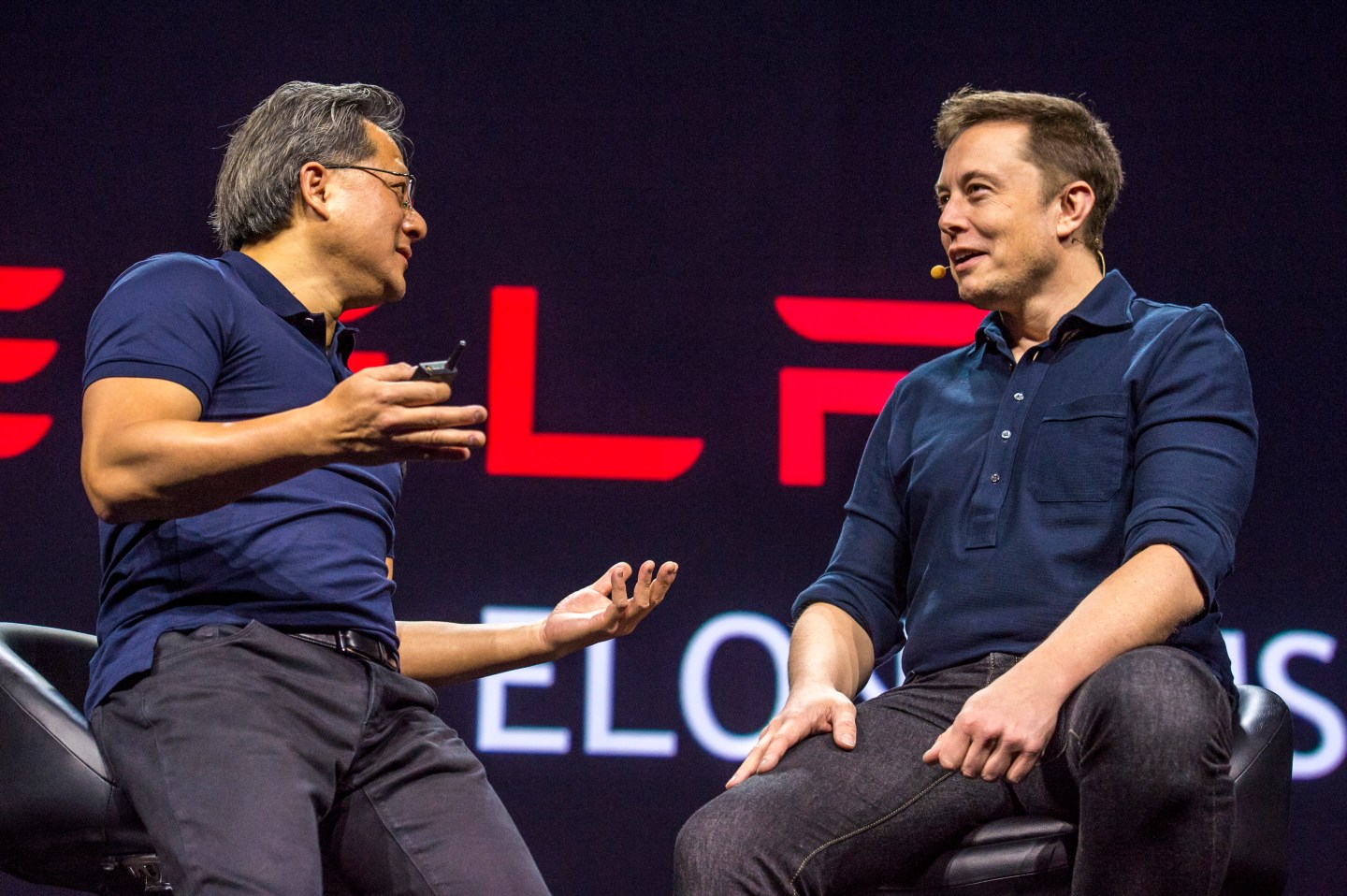 The chief executives of Nvidia and Tesla Motors took the stage of the San Jose Convention Center today to discuss technology innovation in cars. Jen-Hsun Huang, co-founder and CEO of Nvidia, and Elon Musk, CEO of Tesla, were the keynote speakers of the 2015 GPU Technology Conference, a meeting for developers working with graphical processing units (GPUs). Their discussion focused on the use of fast in-vehicle computers that allow cars to autonomously drive.

Huang began the conference by announcing the Titan X, Nvidia’s new GPU. He said that tasks that took five days with Nvidia’s previous GPU could be achieved in 1.5 days with the Titan X.

Nvidia’s Drive PX, the company’s new automotive platform, was introduced at the 2015 Computer Electronics Show in Las Vegas in January. It will be available to automakers starting in May. The Drive PX system is capable of 116 billion connections per second.

Tesla’s Musk minimized the challenges necessary to achieve a future where self-driving cars will become commonplace. “I view it as a solved problem,” said Musk, who compared autonomous cars with elevators that used to require operators, but are now self-service.

According to Musk, autonomous driving at low-speeds, about 10 miles per hour, and high-speed uniform highway travel are not difficult. “Where it gets tricky is traveling at about 10 to 50 miles per hour in urban environments,” he said, where conditions such as children playing are hard to anticipate.

While the technology is nearly ready for ubiquitous autonomous cars, the massive scale of automotive industry’s manufacturing base will require time to change, according to Musk. There are approximately 2 billion cars and trucks on global roads, but only about 100 million new ones are built every year. “It’s not all going to transition immediately,” he said. “It’s the same for the electrification of cars.”

Today, less than one percent of new cars are electric. “If all cars produced today were electric, it would still take 15 years to make all cars electric,” said Musk.

Tesla and Nvidia are among the small set of Silicon Valley companies leading the transformation of 21st car technology. Tesla, well known for its luxury all-electric Model S, is seeking to make long-range battery-powered cars a mainstream option. Its plan includes an all-electric luxury crossover, a small $35,000 sedan, a nationwide network of proprietary quick-charging stations and a massive battery factory. Nvidia is the maker of the fast graphical processing units that enable autonomous vehicles as well as highly configurable virtual dashboards. Nvidia technology powers the large tablet-like dashboard display in the Tesla Model S.

Nvidia is best known for technology used in gaming and special effects. But Huang said that its automotive business doubled last year.

“The car is a software computer on wheels,” said Huang, in his introduction. “The car is going to be one delightful computer going down the streets. It’s also going to be smart.” Huang said that the key to this transformation is super computing. “The big bang of self-driving cars is about to happen,” he said.