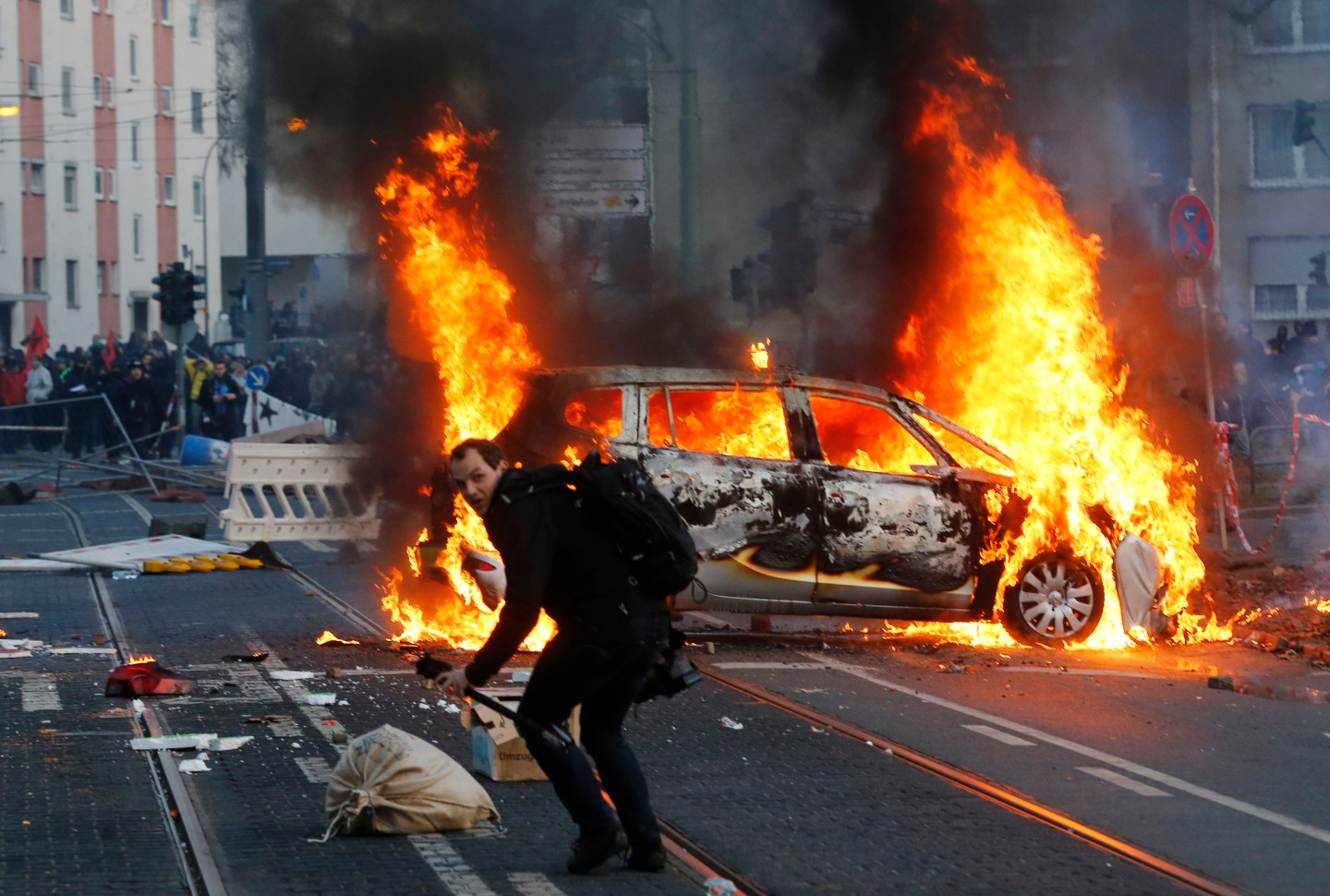 A police car burns after clashes between demonstrators and police Wednesday, March 18, 2015 in Frankfurt, Germany. The Blockupy alliance said activists plan to try to blockade the new headquarters of the ECB to protest against government austerity and capitalism. (AP Photo/Michael Probst)
Photograph by Michael Probst — AP

Anti-capitalism protestors clashed with police Wednesday as the European Central Bank unveiled its new $1.4 billion headquarters in Frankfurt. It made for a chaotic scene, both on the ground and on social media. Protestors set fire to barricades and cars, leaving a thick haze floating over the city’s skyline.

Nearly 90 police have been hurt by stones and unidentified liquids thrown by a small number of aggressive protestors. Police used pepper spray and water cannons to try to control the crowd and make a path through the protestors to the entrance of the new ECB building. Some 350 demonstrators have been arrested and dozens injured.

The protest is led by a group called Blockupy and German workers’ unions. An estimated 10,000 demonstrators have taken to the streets to campaign against what they see as unfair practices by the ECB that have led to debilitating austerity measures in EU member states.

The ECB is in charge of managing the euro and outlining euro zone policy. It has also played a key role — in partnership with the International Monetary Fund and European Commission — in setting conditions for bailouts in Ireland, Greece, Portugal, and Cyprus.

We joined the EU and to trade not to be dominated and bullied #blockupy #BallyheaSaysNo @lukeming pic.twitter.com/20URsrndhd

ECB President Mario Draghi addressed a crowd at the grand opening of the new headquarters, inaugurating the 600-foot-tall tinted glass building that will serve as the new home for thousands of central bankers.

Draghi also directed part of his speech toward the protestors, according to an advance text obtained by the New York Times.

European unity is being strained. People are going through very difficult times. There are some, like many of the protesters outside today, who believe the problem is that Europe is doing too little.

But the euro area is not a political union of the sort where some countries permanently pay for others. It has always been understood that countries have to be able to stand on their own two feet – that each is responsible for its own policies. The fact that some had to go through a difficult period of adjustment was therefore not a choice that was imposed on them. It was a consequence of their past decisions.

It is always a matter of balance. Stay up and smash state terrorism #Frankfurt #Blockupy #ecb pic.twitter.com/BHrybw8cd0

Activists balked at the expense of the new building, which cost an estimated 1.3 billion euro to build. They see it as a symbol of the bank’s detachment from the economic pain that has plagued many EU countries. Blockupy coordinators said on their website that “there’s nothing to celebrate in your handling of the crisis” and encouraged supporters to take to the streets during the debut of the ECB’s new building.

Here’s even more evidence that the intended peaceful protests have become less than friendly.

Frankfurt almost looks like a war scene on the day of the opening of new ECB headquarters.Massive protests. #Blockupy pic.twitter.com/ruMtfI3rUe

Reuters: A German police officer who was hit by a paint bomb thrown by #Blockupy protesters looks at a burning car pic.twitter.com/uKTk1vl5Mn