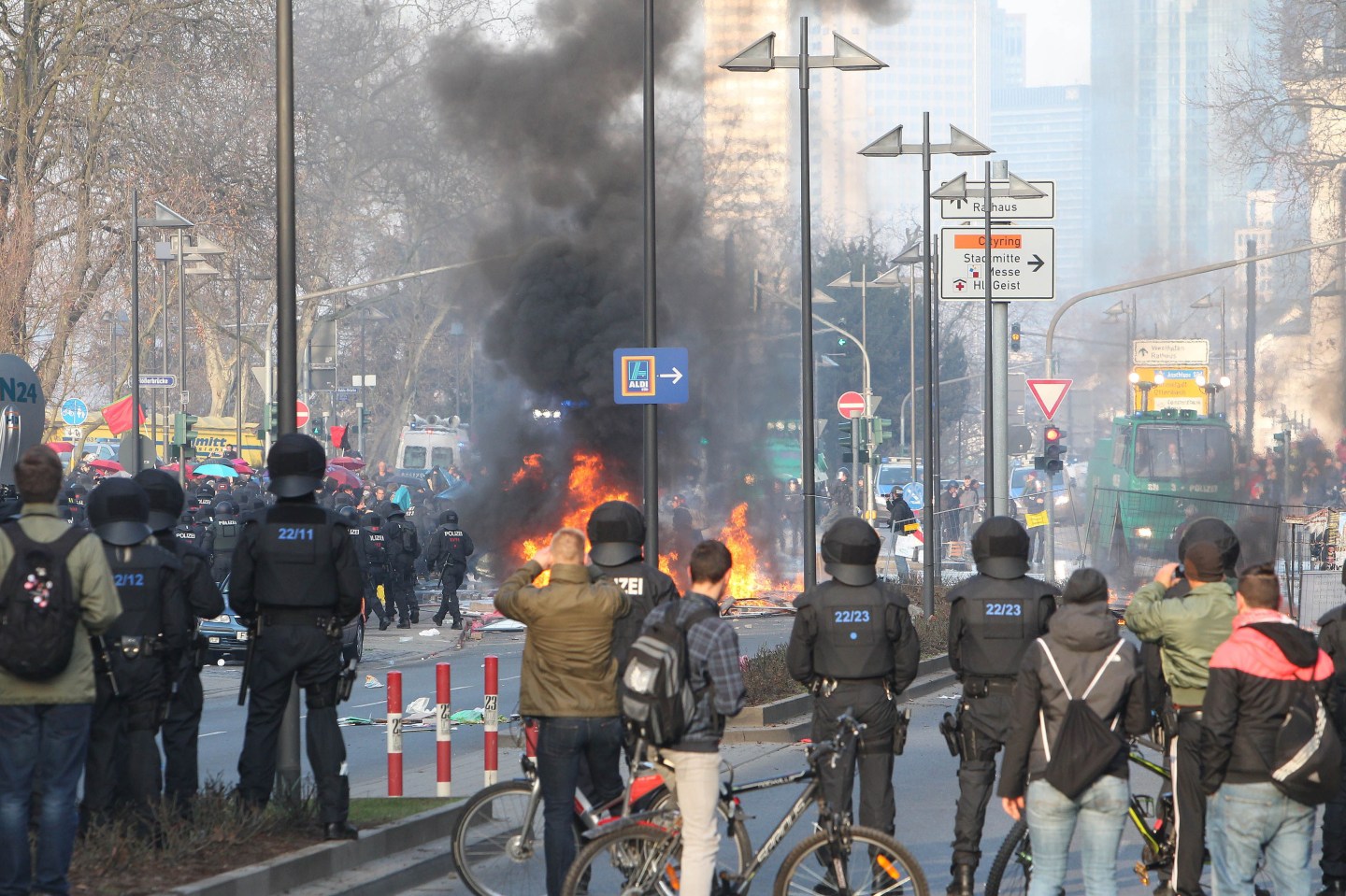 Riot police use water cannon during clashes with protesters on the opening day of the European Central Bank (ECB) in Frankfurt am Main, western Germany, on March 18, 2015. Supporters of the so-called Blockupy alliance consisting of social movements, activists, workers, trade unions and parties are expected to stage large protests against austerity and the authority of the European Central Bank when the bank's new headquarters officially will be on March 18, 2015. AFP PHOTO / DANIEL ROLAND (Photo credit should read DANIEL ROLAND/AFP/Getty Images)
Photograph by Daniel Roland — AFP/Getty Images

Police made over 350 arrests in Frankfurt Wednesday as an anti-austerity protest by the leftist Blockupy movement to mark the official opening of the European Central Bank’s new headquarters turned violent.

Police used tear gas and water cannon to control the crowds after protesters set seven police cars ablaze with Molotov cocktails and hurled cobblestones from behind impromptu barricades. Firemen trying to douse the blazes were also attacked, as were a number of the city’s trams, Der Spiegel reported police as saying. The protesters in turned blamed police provocation and the aggressive encirclement or ‘kettling’ of their supporters.

Over 80 police officers were injured by mid-morning in clashes both at the site of the ECB and at various other flashpoints in the city center.

The protest is due to reach its climax this afternoon with a mass gathering in Frankfurt’s historic Römerberg square.

The occasional violent protest has been a feature of Germany’s left-wing, anti-establishment scene–the so-called “Autonomen” for decades. Police said they had expected violence at Wednesday’s demonstration, but admitted being surprised at the scale of it.

Many of the protesters had traveled from Berlin, while the movement also claimed that 60 buses would bring in others from 39 cities across Europe to protest against the “crisis regime” of austerity which they see the ECB as embodying.

The ECB is part of the “troika” of institutions that has enforced socially painful bailout agreements from Greece to Ireland and Portugal in the last five years, consistently arguing for budgetary discipline and radical reform of the Eurozone’s labor markets. That austerity has played an important role in driving unemployment up to over 20 million and driving much of the region to the brink of a destructive deflationary spiral.

Greece’s finance minister Yanis Varoufakis said in an interview earlier this month that the ECB was denying Greece “the air to breathe” by refusing his requests to allow Athens more short-term borrowing under its bailout program, while Prime Minister Alexis Tsipras has been quoted as saying that the ECB “has the rope around our necks.”

However, the ECB has appeared to wake up to the risk of deflation in recent months, and the demonstration comes just as it starts to give away money almost for free–a policy long dear to the heart of Europe’s left. The ECB’s key interest rate stands at a record low 0.05%, and this month it started pumping €60 billion a month into the economy to stop the drift to deflation. That has driven the euro to a new 12-year low against the dollar.

But there’s more than one irony in today’s events. The ECB may have spent the last five years preaching budget discipline to elected governments, but it has made a lousy job of applying those principles to itself. The glitzy new tower is costing €1.3 billion, over 50% more than the original €850 million estimate. It’s also three years late. And it’s still going to be too small to meet its original purpose of consolidating all the various ECB offices around Frankfurt.

Admittedly, that’s due in good measure to factors outside the ECB’s control: the bank got saddled with the job of supervising the Eurozone’s largest banks halfway through the construction, requiring it to hire hundreds of new staff. But the overspending had begun well before it could use that excuse.

All of which means that, while the violence might be an inconvenience for the bank (and a much bigger one for the rest of Frankfurt), it does at least have this silver lining: at least the headlines won’t be about its failure to practise what it preaches.