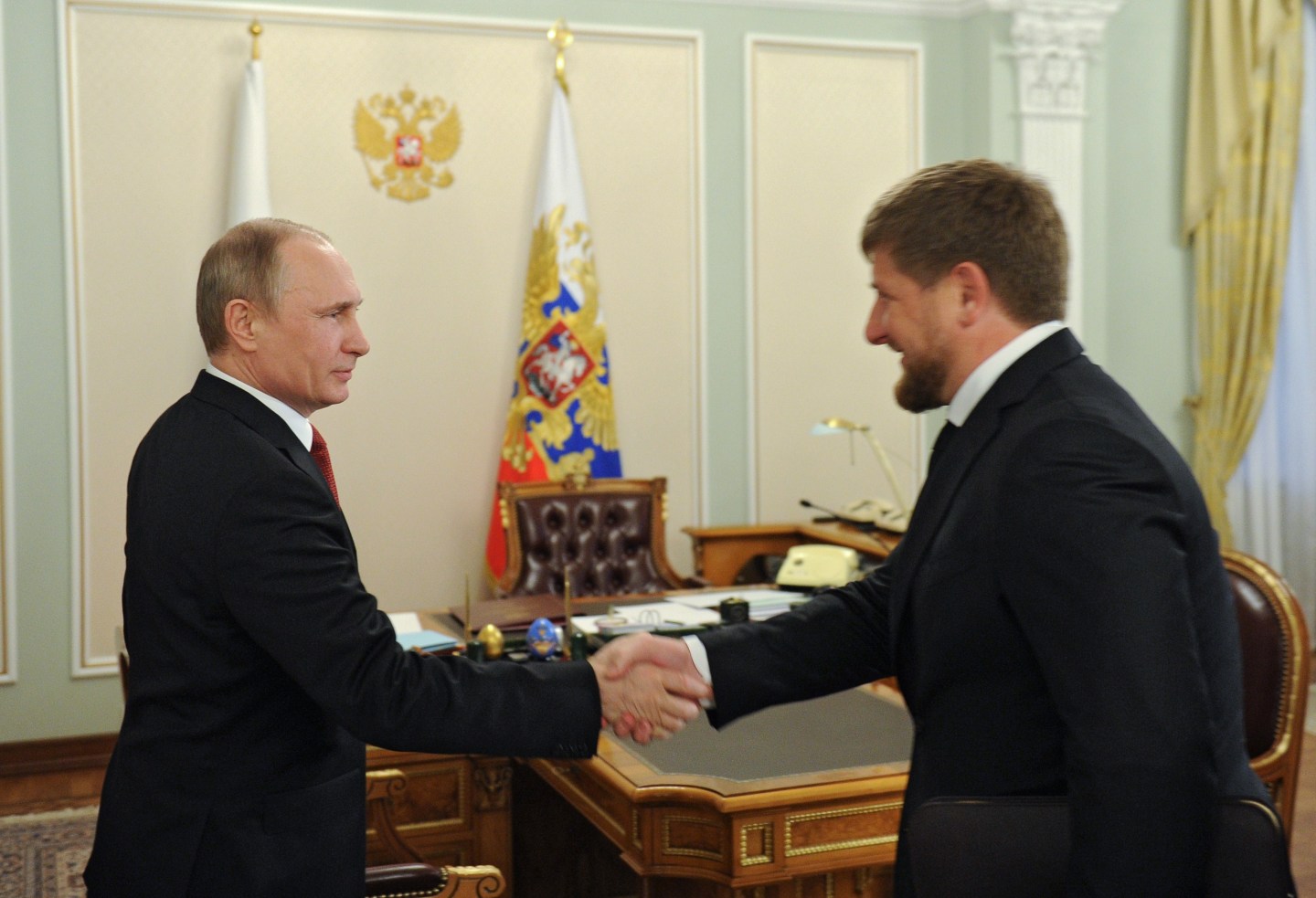 Russia's President Vladimir Putin (L) shakes hands with Chechnya's head Ramzan Kadyrov during their meeting in the Novo-Ogaryovo residence outside Moscow, on April 7, 2014. Ukraine was threatened yesterday with disintegration as pro-Kremlin militants seized government buildings in the eastern city of Donetsk, declared independence and vowed to vote on joining Russia. The activists proclaimed the creation of a "people's republic" and appealed to Putin to send a "peacekeeping contingent of the Russian army" to support them. AFP PHOTO / RIA-NOVOSTI / POOL/ MIKHAIL KLIMENTYEV (Photo credit should read MIKHAIL KLIMENTYEV/AFP/Getty Images)
Photograph by Mikhail Klimentyev — AFP/Getty Images

Is he ill? Is he too busy trying to contain a power struggle at the top of the Russian state? Is he really going to fire Igor Sechin, his strong right arm?

Moscow is awash with rumors about President Vladimir Putin, who hasn’t been seen in public in nearly a week. He’s also postponed a trip to meet with the presidents of Kazakhstan and Belarus, two important neighbors, and–even more intriguingly–skipped one of his favorite diary items, an annual address to his old colleagues at the Federal Security Service, or FSB (successors to the KGB).

A country that depends on a personality cult around a strong, unifying leader doesn’t need this kind of absenteeism. After all, it’s less than six months since Vyacheslav Volodin, Putin’s deputy chief of staff at the Kremlin, told an audience of international analysts and journalists that “Without Putin, there is no Russia.” By the government’s own logic, the prolonged absence of Putin begs the question–what is happening to the Russian state?

Things look even fishier, viewed close up. The newspaper RBC exposed inconsistencies in the Kremlin’s version of what Putin is supposed to have been doing earlier this week. RBC’s sources “close to the Kremlin” said that, of two meetings with regional governors that supposedly happened at the Kremlin this week, one was done remotely, and the other took place last Thursday.

So where is he and why is he missing big dates in his diary?

Most of the speculation focuses on Ramzan Kadyrov, the president of the Caucasus republic of Chechnya. Kadyrov occupies a unique place in the Russian power structure. His many critics say he has used it to poison the whole of Russia’s body politic since 2003, when he inherited the peace deal that his father brokered with Putin at the end of the Second Chechen War.

Brutally repressive locally, Kadyrov has sucked billions of dollars in subsidies from Moscow to help pacify the region, always with the implicit threat that he and his security forces could again turn rogue unless they were kept sweet. In return, he has been one of Putin’s loudest and most loyal lieutenants (in the presidential elections in 2012, 99.76% of voters in Chechnya voted for Putin).

Late Sunday, Kadyrov had leapt to the defense of Zaur Dadayev, one of five Chechens arrested on suspicion of killing the opposition politician Boris Nemtsov, calling him a “true patriot” and saying that his devotion to Russia was beyond question, even if he is found guilty of the murder.

Dadayev had until recently been a deputy commander of Kadyrov’s ‘North Battalion’, a man who enjoyed his personal trust. He now claims he’s innocent, and says his earlier confession had been extracted under duress.

To many, Kadyrov’s intervention came close to admitting ultimate responsibility for Nemtsov’s murder, a demonstration of his power and untouchability. He timed his announcement one day before receiving a medal from Putin in the Kremlin for his outstanding public service.

The identity of who ordered Nemtsov’s killing may never be discovered. Kadyrov’s own interventions provide, at best, circumstantial evidence. But what has happened so far is consistent with the murders of other opponents of Kadyrov.

Parallels have been drawn to the assassination of the journalist Anna Politkovskaya in 2006, but the stronger ones are with the case of Ruslan Yamadayev, a member of the last clan to challenge Kadyrov seriously for power in Chechnya. Yamadayev was shot dead outside the federal government’s building in 2008, just after leaving a meeting in the Kremlin.

In both cases, rank-and-file Chechen hitmen were convicted but in neither case was the organizer of the killing found.

Gradually, the idea is becoming consensus that, when a high-profile politician is gunned down under the walls of the Kremlin–particularly one who is kept under constant surveillance–then either the President is responsible or he has lost control. Neither version is particularly pleasant to contemplate.

Either way, as Nemtsov’s daughter Zhanna put it to the BBC Thursday, Putin was “politically” to blame for the culture that allowed the murder to happen, even if he didn’t order it.