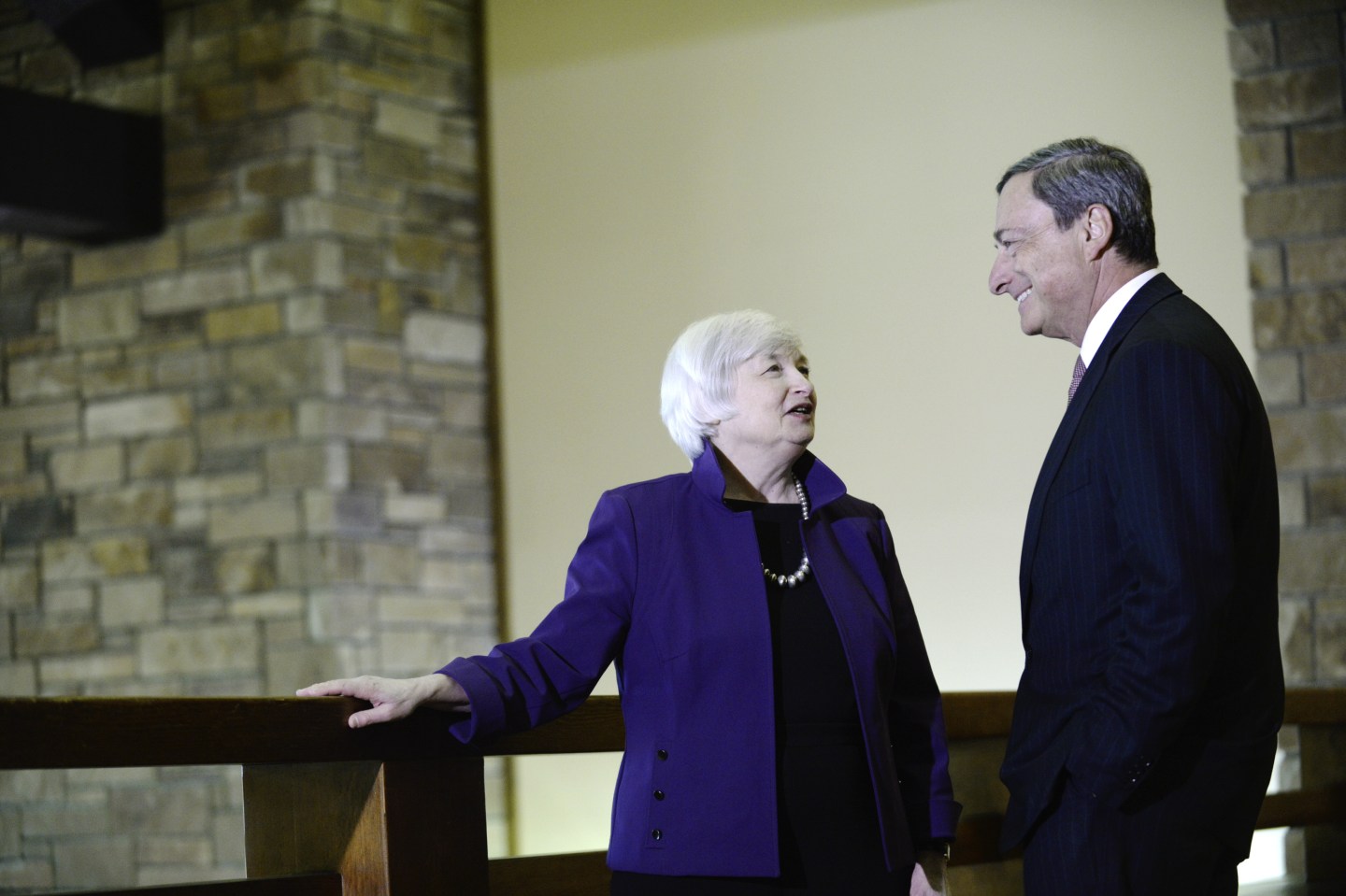 Janet Yellen, chair of the U.S. Federal Reserve, left, speaks with Mario Draghi, president of the European Central Bank, during the Jackson Hole economic symposium, sponsored by the Kansas City Federal Reserve Bank, at the Jackson Lake Lodge in Moran, Wyoming, U.S., on Friday, Aug. 22, 2014. Yellen said "the labor market has yet to fully recover, in a speech today at the Kansas City Feds annual conference. Photographer: Bradly Boner/Bloomberg via Getty Images
Photograph by Bradly Boner — Bloomberg via Getty Images

The euro’s giddying descent continues. And we aren’t anywhere near the end of it yet, according to some of the biggest players on the world’s foreign exchange markets.

Europe’s single currency fell to a new 12-year low of $1.0560 against the dollar Tuesday, buckling under a wave of freshly-printed money issued under the European Central Bank’s new quantitative easing program. It’s now fallen an astonishing 18% against the dollar in just a little over four months.

That’s an enormous move for an exchange rate which essentially puts a relative value on the two biggest economic blocs in the world. Entities that big aren’t supposed to change their value that quickly. But they do when the institutions that control the money supply in those blocs start to head in opposite directions, which is now the case.

The Federal Reserve, having run an unprecedentedly loose monetary policy to get the U.S. through the Great Recession, is now on the verge of raising interest rates for the first time in nearly a decade after yet another blowout set of employment numbers last week.

St. Louis Fed Governor James Bullard told the Financial Times in an interview published Wednesday that a rate hike is now overdue, saying “We are a little bit too late in this process.” Bullard isn’t one of the voting members on the Fed board this year, but has a reputation of being in the floating center of the bank’s policymakers.

Meanwhile, over in Frankfurt, the European Central Bank, after trying to get through the crisis years without quantitative easing, finally threw in the towel towards the end of last year, admitting that the threat of deflation was increasingly real.

Given how clear those trends have been, and how well flagged in advance the thinking of both central banks is, the sharpness of this week’s moves have been a surprise to many in the markets. Some may have doubted–at least until President Mario Draghi repeated his commitment last Thursday–that the ECB was really willing to buy €60 billion a month of largely government bonds, even though it is bound to make a loss on them if it holds them to maturity. Among German government bonds, the biggest single debt market in the Eurozone, not a single bond that matures before 2022 carries a positive yield.

With the ECB driving down returns on euro-denominated bonds, European capital is flooding out of the Eurozone in search of better returns. Analysts at Deutsche Bank say this is a process that has a long way to run yet. With austerity policies cramping domestic demand, the Eurozone is creating massive current account surpluses that need to be recycled abroad, creating what Deutsche’s George Saravelos and Robin Winkler call a Euroglut that will last for the foreseeable future.

Saravelos and Winkler cut their forecasts for the euro again Tuesday, and now expect it to hit 90c by the end of next year and a new record low of 85c in 2017. With the currency already at $1.0560, their call for parity by the end of 2015 seems almost conservative.

The euro is weak against pretty much everything right now. It hit a new eight-year low against sterling, the Eurozone’s most important European trading partner, Tuesday, and would be doing the same against the Swiss franc, Swedish krona and Danish krone if those countries’ central banks weren’t resorting to ever-more desperate measures to stop it.

Currencies, of course, never collapse completely, barring cataclysms like war or hyperinflation. But it’s clear from the chart below that the euro still has quite some room to fall before it reaches its all-time, trade-weighted low.

But the euro is, of course, only one side of a currency pair. And none of this would be quite as dramatic if the dollar wasn’t on its strongest run in over a decade. It has already risen by more than it did during the panic of 2008, when investors around the world dumped ‘risky’ assets in overseas markets and sought safety in the enduring promise of the U.S. Treasury.

According to analysts at Credit Suisse, this, too is a cycle that has a long way to run yet. A structural downward shift in energy prices and a seemingly unstoppable wave of technological innovation have restored confidence in the U.S.’s long-term prospects to its highest level in many years. While that doesn’t eliminate some of the U.S.’s other risks such as unfunded pension and healthcare liabilities, it does at least shift investors’ risk-reward calculations substantially.

‘Technical’ analysts, who study the chart patterns made by the endless buying and selling of currencies and any other assets, point out that the dollar has now broken through a long-term downward trend line that goes all the way back to the 1987 Plaza Accords.

Not everyone believes in technical analysis, especially on a long-term view, but one thing is clear: very few people trading currencies today were in the market the last time either the dollar or the euro faced a situation like this. It’s not quite terra incognita, but it may just as well be.