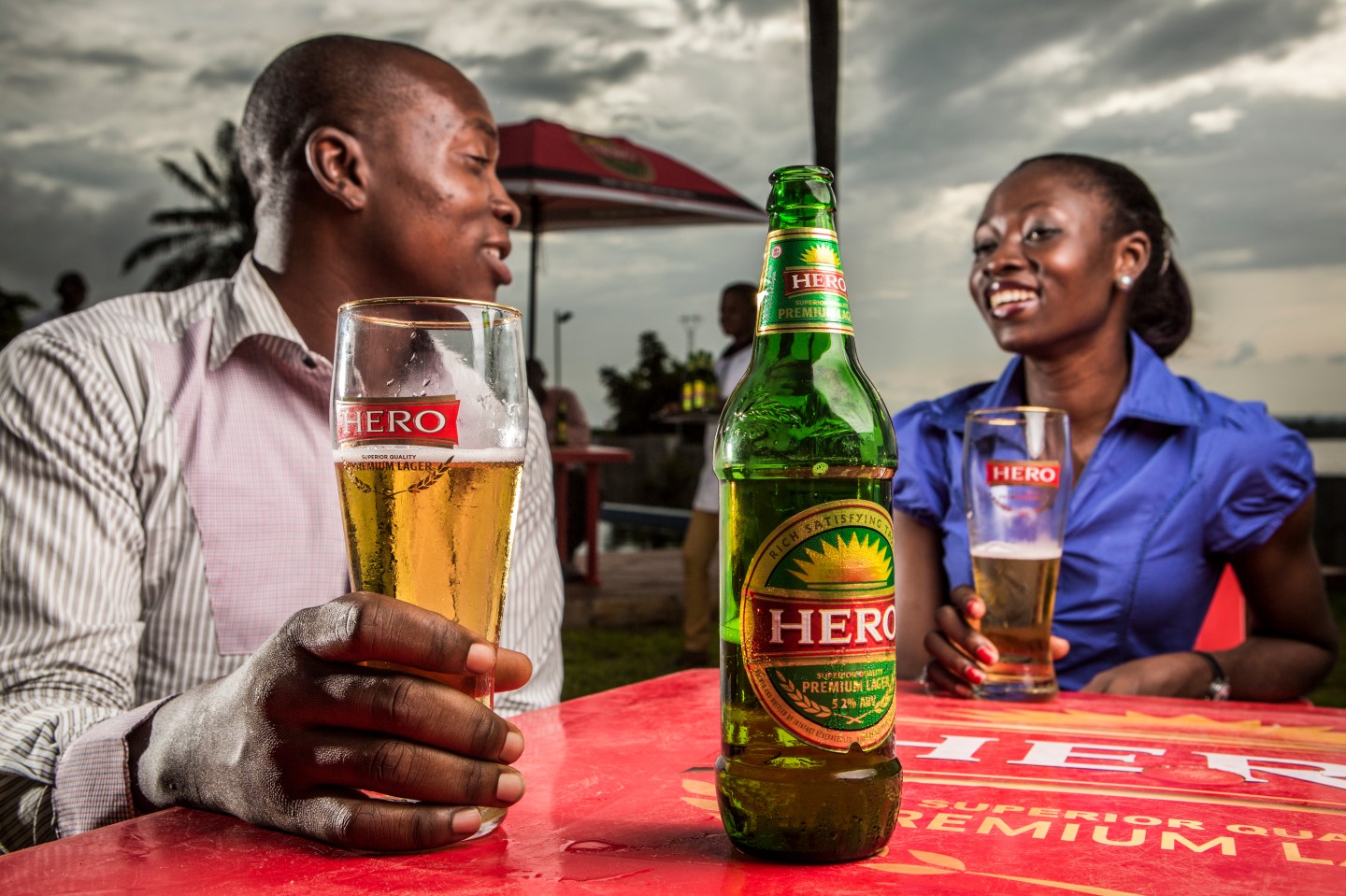 No, that isn’t a happy hour promotion run amok, it’s the price the brewer charges for many of the local beers it sells in Africa, the world’s second largest continent by population. And while it might not seem like a lot of money, the brewer is asking Africans to spend almost double what they would pay for the homemade brews and spirits that are most popular on the continent.

SABMiller has outlined a new strategy that focuses on keeping a lid on beer prices and developing local lagers to help the world’s second largest brewer tackle an increasingly important but complex market.

While many Western alcoholic beverage companies lean heavily on North America and Western Europe for volume and profits, Africa is far more important to SABMiller than other global rivals such as Anheuser-Busch InBev and Carlsberg. SABMiller derives 27% of its volume from the region, and almost a third of its profits. Over the medium term, the company expects volume will rise in the mid-single digits with net producer revenue projected to rise 10% — growth that would greatly outperform the company’s overall performance.

“Consumers in Africa drink the same amount of alcohol as consumers everywhere else,” said Mark Bowman, managing director of SABMiller Africa at a presentation in New York City. But the problem that brewers face is beer isn’t the alcoholic beverage of choice, at least not right now.

Africa is an alluring market to major brewers. On average, Africans drink nine liters of beer per person, per year, compared with a global average of 45 liters. Africans prefer fortified wines, rice wine and, quite often, cheaper homemade alcohol. Illegally made alcohol continues to dwarf the legal market in Africa, according to SABMiller and estimates from global health organizations.

SABMiller is trying to get more Africans to consider the brands it legally produces, which are sold at low sticker prices by Western standards but cost more for Africans to buy due to their limited purchasing power. Eight hours of work is needed for the average African to make enough money to buy a beer, compared to just eight minutes in Europe. A lager at the local pub is a far greater luxury in Africa.

As a result, SABMiller’s strategy partly hinges on fewer price increases with a greater focus on volume. As economies improve and Africans make more money, if beer prices stay stable, SABMiller hopes it can win more market share. SABMiller has conceded that the plan will result in lower margin growth for now.

Investments are also needed. The company is in the process of completing a $100 million brewery expansion project in Ghana that will double brewing capacity. It has spent millions boost capacity in Nigeria, Zambia, and a handful of other markets.

Localization — the process of adapting a product to a specific locale, or market — is also important. SABMiller sells Hero in Nigeria, Balimi in Tanzania and Club lager in Ghana, each with their own brand stories that closely align with the nation’s identity. Such localization efforts have helped SABMiller increase its beer market share to 48% from 28% five years ago, for example.
[fortune-brightcove videoid=4103466039001]

Analysts have said due to Africa’s large population, rising economic growth and relatively low beer consumption, the continent is likely the most attractive region for long-term profit growth.

But there are also vast challenges, including high costs and low brewer productivity outside South Africa. In the northern part of the continent, for example, countries such as Morocco and Algeria have a high level of abstention from alcohol. These are regions where Muslims make up nearly all of the population.

Selling more beer to African women also represents both an opportunity and a challenge. Women only make up about 10% of the consumer base for lagers, and SABMiller is still tinkering with how it can best reach that important audience. A mistake SABMiller made in the past is that it targeted women with the Redd’s brand, but later found both genders rejected the female-focused marketing. The brewer has had more success when marketing a brand as gender neutral, or even slightly more masculine.

“We haven’t been able to crack the female-centered component of beer,” said Bowman.