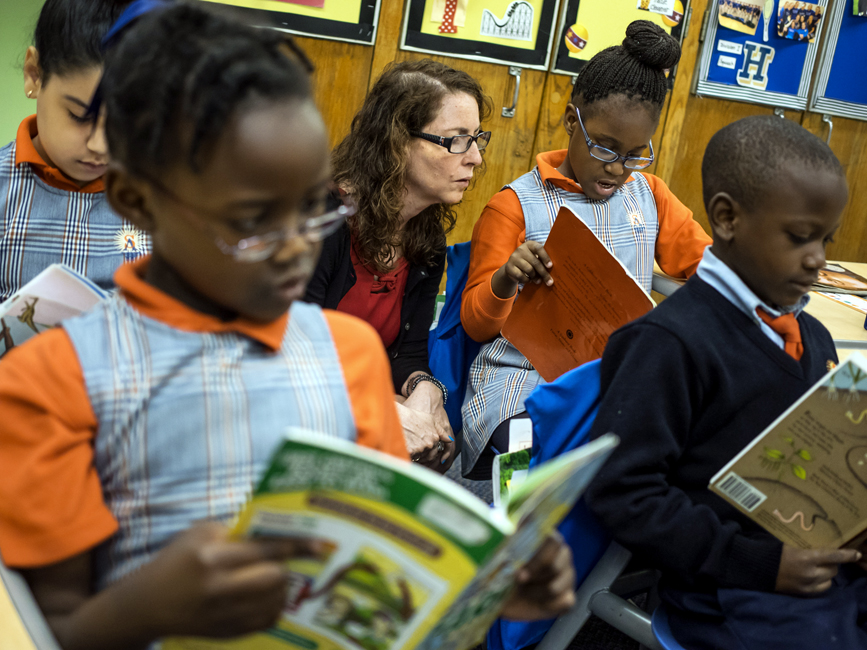 But whatever your politics, it’s hard to deny her results. In New York, where dozens of public schools failed to pass a single black or Hispanic student on last year’s state math and reading exams, Moskowitz’s 32 Success Academy Charter Schools rank in the top 1% of all the state’s programs in math—and in the top 3% for English.

Daniel Loeb, CEO of the hedge fund Third Point and Success Academy board chair, likens it to an Internet startup: “The intensity of focus that leads to outstanding results, the use of data, the recruitment and cultivation of talent—it feels like you
are on a mini-Google campus.”

On a tour of Success Academy’s flagship school in Harlem, Moskowitz shared her philosophy on disrupting education.

Kids should struggle. “There’s this sense in public education that kids are fragile, that their self-esteem will be hurt,” she says. “We believe self-esteem comes from mastery.” Moskowitz doesn’t worry about kids’ being stressed about test taking; Olympic athletes get stressed too. Too often schools aim low for children in poverty. “We have to reverse that thinking,” she says. Success Academy’s South Bronx school—in the nation’s poorest congressional district—is one of its top performers.

Chess is key to building agile minds. Every kid is required to study the game—and tournaments are a favorite school sport. Science is crucial too. This is the rare elementary school in which science is taught five days a week, relying heavily on hands-on experiments. Computer-coding classes start in second grade.

Assume all your students are going to college. At Success Academy schools, each teacher’s alma mater is listed on his or her name card outside the classroom door—along with students’ names and their expected graduation year. Even in art classes, which Moskowitz says should be front and center in any curriculum (“not extracurricular”), there is this sign: designers and artists go to college.

Extend the same college expectations to special-ed students. In some classrooms a third of Success Academy students have learning and emotional disabilities. Moskowitz provides intense help for those students but operates under the assumption that “special ed” is not a permanent track. “It’s not an inability. It’s a disability,” she says. Her special-ed kids actually outperform New York City’s general-education students in math and English.

No coddling for teachers either. They are expected to work long days and longer school years and attend far more training sessions than regular city teachers. For that, they get paid 30% more than their unionized counterparts. Says Nina Rees, CEO of the National Alliance for Public Charter Schools: “Her secret sauce is definitely in the teacher training.”

Principals, not just teachers, have to know their students. Even principals must memorize the names and families of each of the hundreds of children in their charge.